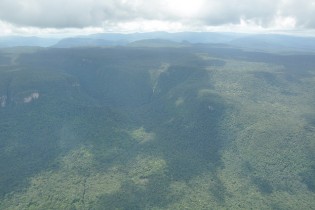 By Denise M. Fontanilla
A week of climate negotiations in Geneva, Switzerland Feb. 8-13 are setting the stage for what promises to be a busy year. In order to reach an agreement in Paris by December, negotiators will have to climb a mountain of contentious issues which continue to overshadow the talks.

By Stephen Leahy
Hopefully, on Earth Day today, high-level ministers from all countries are thinking about what they can bring to the table at a key set of meetings on climate change in early May.

By Jewel Fraser
Since they first emerged as a result of the 1997 Kyoto Protocol, carbon offset markets have been a key part of international emissions reductions agreements, allowing rich countries in the North to invest in “emissions-saving projects” in the South while they continue to emit CO2.

By Desmond Brown
The tiny island of Nevis in the northern region of the Lesser Antilles is one of the few remaining unspoiled places in the Caribbean. It is now seeking to become the greenest, joining a growing list of Caribbean countries pursuing clean geothermal power.
Next Page »
ADVERTISEMENT ADVERTISEMENT