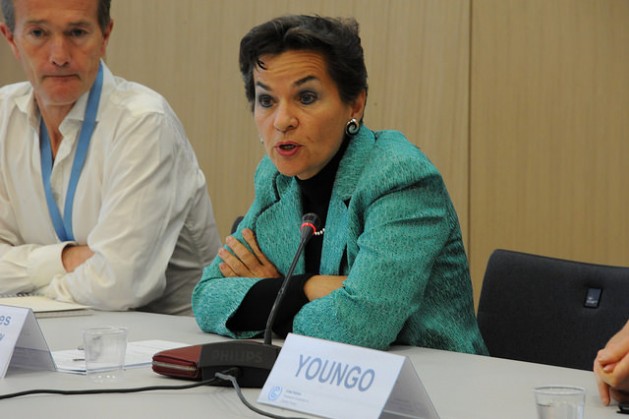 UNITED NATIONS, Jun 11 2015 (IPS) - As climate talks wind down in Bonn, Germany, observers of the negotiations say that despite some progress on a draft text, key issues remain unresolved and will carry over at least until the next round in August.

These pending items include the legal form of the final treaty, how to fairly distribute emission reduction commitments, and also how to generate sufficient public finance for adaptation to climate change.

Athena Ballesteros, director of the Finance Center, World Resources Institute, said, “After two weeks of discussions, there remains much to do to cut the finance text down to a workable size. While G7 leaders reaffirmed their commitment to mobilising 100 billion dollars a year in climate finance by 2020, donor countries have yet to elaborate how they will meet this goal.

“As negotiators head back to their capitals, they need to focus on converging around a robust finance package to deliver in Paris. This package should include establishing regular cycles to scale up funding over time, closing the finance gap on adaptation, and sending a clear message that all investments be oriented towards achieving the two-degree goal and building climate resilience.”

One main area of agreement was on REDD (reducing emissions from deforestation and degradation), a concept that was formally agreed to at the United Nations Framework Convention on Climate Change (UNFCCC) negotiations in Bali, Indonesia in 2007.

REDD is intended to reward the preservation of forests with carbon credits which can be sold to polluting companies in the North wishing to offset their harmful emissions. (REDD+, agreed later, extends the concept beyond forests and plantations to include agriculture.)

The deal reached in Bonn resolves all of the outstanding technical issues on REDD+, including finance mechanisms, safeguards and non-market approaches.

REDD has long been a target of criticism by indigenous peoples and other forest dwellers who lack formal land rights and rely on forest resources for their livelihoods – and are all too often excluded from the benefits of international investment.

“Today’s breakthrough was unexpected, and countries should be praised for their hard work over the last decade,” said Gustavo Silva-Chávez, who manages the Forest Trends REDDX tracking initiative.

“While REDD+ is finished on paper, the Paris global deal must provide the policy certainty to implement REDD+ on the ground.”

More than 40 countries also released their national climate plans, and Norway announced that it will divest eight billion dollars from coal in its efforts to accelerate clean energy. Norway’s Statoil was also one of six European oil and gas giants to formally ask the UNFCCC executive secretary, Christina Figueres, for “an open and direct dialogue” on carbon pricing.

But some civil society groups remain sceptical of pledges by the G7 to “decarbonise” the global economy, noting that leaders gave only vague assurances they would work to mobilise 100 billion dollars per year by 2020 to help poorer nations cope with the worst effects of climate change.

“G7 countries have signalled their agreement on the importance of tackling climate change eventually, but haven’t announced any meaningful action,” said Susann Scherbarth, climate campaigner for Friends of the Earth Europe.

“The emission cuts they’ve promised are less than half of what climate science recommends and justice requires. We are on the path to a disastrously empty deal in Paris this December, but ordinary people are making the energy transformation that our governments have failed to.”