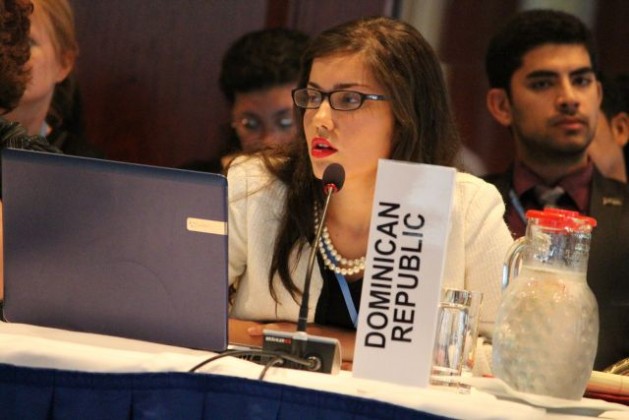 GENEVA, Feb 12 2015 (IPS) - A week of climate negotiations in Geneva, Switzerland Feb. 8-13 are setting the stage for what promises to be a busy year. In order to reach an agreement in Paris by December, negotiators will have to climb a mountain of contentious issues which continue to overshadow the talks.

One such issue is the relevance of gender in the climate change negotiations.

“Women and girls are differentially impacted by climate change. More importantly, they are agents, they have been contributing to climate solutions, especially at the community level." -- Verona Collantes

While gender mainstreaming has become a standard practice within development circles and was a critical aspect of the Millennium Development Goals, it still remains on the fringes of the U.N. climate discussions.

Recent developments have forced gender back into the spotlight thanks to concise action this week from the representatives of a number of countries, including the Dominican Republic, Ghana, Sudan, Mexico, Chile and the EU.

Anniete Cohn-Lois, head of gender affairs under the Dominican Republic’s vice presidency, has been one of the most vocal proponents of gender equality in the negotiations. According to the Germanwatch Long-Term Climate Risk Index, the Dominican Republic was the eighth most affected country in terms of the impacts of climate change over the past two decades.

However, as Cohn-Lois explained, her passion for Gender rights here in Geneva has been inspired by a particularly localised experience of marginalised women in Jimani, on the southern border with Haiti.

Cohn-Lois added that many of the women in this area are single mothers, with some taking care of both elderly relatives and children. These women are some of the most vulnerable to climate change in the Dominican Republic and face several challenges, including gaining access to clean water.

“Since the southern side is such an arid part, access to water is still an issue. They can only afford to buy water weekly or even biweekly and find a way to [store] it,” she said.

She also noted that they have a wind farm in the area which provides electricity to most of the houses there.

Cohn-Lois is aware that women face similar challenges all over the world. Through her diplomatic post, she has markedly advanced the awareness of the importance of gender equality within the U.N. climate negotiations.

This week, she has called not only for gender equality in relation to climate change, but also gender-sensitivity, particularly and the value of community-based approaches to climate mitigation and adaptation programmes.

However, as Verona Collantes of UN Women argues, the task is not only to recognise that women are more affected by climate change, but to ensure they are a large part of the solution.

“Women and girls are differentially impacted by climate change. More importantly, they are agents, they have been contributing to climate solutions especially at the community level,” the Filipina said. Climate change affects the poorest and most vulnerable people the most, and according to U.N. figures, women comprise 70 percent of the world’s poor.

Collantes also noted that women, especially indigenous women, make up the majority of those involved in agriculture and sustainable forest management, which is why it is critical they be represented in discussions on reducing forest-related emissions, here at the U.N. climate negotiations.

“When the man goes to earn a living, it’s the woman who becomes the chief of the household. It’s tied to the management of natural resources and livelihood, using fuel to warm their houses or cook their food, and fetching water – all of those have implications on climate change which, more and more, the parties to the UNFCCC [United Nations Framework Convention on Climate Change] are increasingly recognizing,” she added.

A history of gender in the climate talks

While the U.N climate convention itself did not originally have a reference to gender, it began to be integrated into the talks at the 2001 conference in Marrakech, Morocco. There, negotiators agreed to improve women’s participation in all decision-making processes under the talks.

Following this milestone, the issue became dormant. For the next 12 years, gender was barely mentioned within the negotiations. Then, at the 2012 conference in Doha, Qatar, it was finally revived, thanks largely to a new wave of gender-sensitive negotiators such as Anniete Cohn-Lois.

According to Collantes, the issue then became dormant for almost 10 years. It was not until 2010 in Cancun, Mexico that gender equality once again came under consideration. And it was in Doha that the agreement began to shift from merely a recognition of gender balance towards ensuring women’s capacities are enhanced and formally recognised within the U.N. climate negotiations.

In 2013, a further workshop was held on gender, climate change, and the negotiations in Warsaw, Poland. At that stage, countries and observer organisations submitted ideas on how to advance the gender balance goal.

Last December, a two-year work programme to further explore gender issues was established in Lima, Peru. UN Women is also continuing this work, and currently preparing for another workshop in June on gender-responsive mitigation, technology development and transfer.

“We look at it from the aspect of women’s participation in the development of technology, women’s access to those technologies. Are they part of the beneficiaries? Were they even thought of as beneficiaries in the beginning?” Collantes said.

However, in Warsaw, the U.N. reported that less than 30 per cent of negotiators representing their countries were women. Since then, there have been small representational improvements, but we are still very far from achieving gender equality within the U.N. representatives, let alone in their decisions.

Denise Fontanilla is a Filipina climate activist currently tracking the U.N. climate negotiations in Geneva. This article was made possible through a collaboration with adoptanegotiator.org.