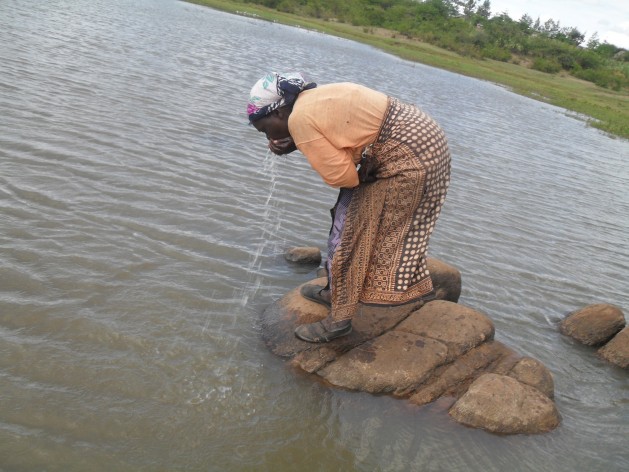 NAIROBI, Jan 26 2015 (IPS) - More women’s voices are being heard at international platforms to address the post-2015 water agenda, as witnessed at the recently concluded international U.N International Water Conference held from Jan. 15 to 17 in Zaragoza, Spain.

But experts say that the same cannot be said of water management at the local level and countries like Kenya are already suffering from the impact of poor water management as a result of the exclusion of rural women.

“At the Zaragoza conference, certain positions were taken as far as water is concerned, but the implementers, who are often rural women, are still in the dark,” environment expert Dismas Wangai told IPS.

Wangai gives the example of the five dams built around the Tana River, the biggest in Kenya.

“It is very important that the so-called grassroots or local women have a say in water management because they are the most burdened by water stresses and are the best placed to implement best practices” – Mary Rusimbi, executive director of Women Fund Tanzania

He says that the dams have not been performing optimally due to poor land management as farmers continue to cultivate too close to these dams.

“This is a major cause of concern because about 80 percent of the drinking water in the country comes from these dams, as well as 60 to 70 percent of hydropower,” he says.

According to Wangai, there is extensive soil erosion due to extensive cultivation around the dams and as a result “a lot of soil is settling in these dams and if this trend continues, the dams will produce less and less water and energy.”

Mary Rusimbi, executive director of Women Fund Tanzania, a non-governmental organisation which works towards women rights,  and one of the speakers at the Zaragoza conference, told IPS that women must be involved in water management at all levels.

“It is very important that the so-called grassroots or local women have a say in water management because they are the most burdened by water stresses and are the best placed to implement best practices,” she said.

According to Rusimbi, across Africa women account for at least 80 percent of farm labourers, and “this means that if they are not taught best farming practices then this will have serious implications for water management.”

Alice Bouman, honorary founding president of Women for Water Partnership, told IPS that a deficit of water for basic needs affect women in particular, “which means that they are best placed to provide valuable information on the challenges they face in accessing water.”

She added that “they are therefore more likely to embrace solutions to poor water management because they suffer from water stresses at a more immediate level.”

According to Bouman, the time has come for global water partners to begin embracing local women as partners and not merely as groups vulnerable to the vagaries of climate change.

Water partnerships, she said, must build on the social capital of women because “women make connections and strong networks very easily. These networks can become vehicles for creating awareness around water management.” She called for developing a more comprehensive approach to water management through a gender lens.

Noting that rural women may not have their voices heard during international water conferences, “but through networks with civil society organisations (CSOs), they can be heard”, Rusimbi called for an end to the trend of international organisations bringing solutions to the locals.

This must change, she said. “We need to rope the rural women into these discussions while designing these interventions. They have more to say than the rest of us because they interact with water at very different levels – levels that are very crucial to sustainable water management.”

Wangai also says that rural women, who spend many hours looking for water, are usually only associated with household water needs.

“People often say that these women spend hours walking for water and they therefore need water holes to be brought closer to their homes” but, he argues, the discussion on water must be broadened, and proactively and consciously address the need to bring rural women on board in addressing the water challenges that we still face.