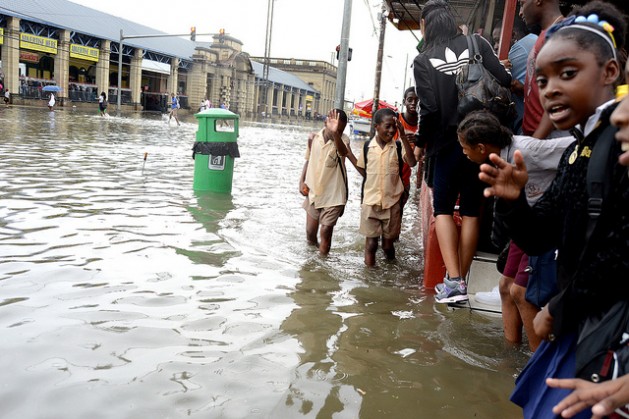 Flooding in Trinidad's capital of Port of Spain left residents little choice but to wade through the deluge. The Caribbean region is already seeing numerous impacts from climate change. Credit: Peter Richards/IPS

UXBRIDGE, Canada, Apr 22 2014 (IPS) - Hopefully, on Earth Day today, high-level ministers from all countries are thinking about what they can bring to the table at a key set of meetings on climate change in early May.

This will be the first opportunity for governments to discuss their proposed climate action plans in light of the final Intergovernmental Panel on Climate Change (IPCC) report released last week.

“There is a clear message from science: To avoid dangerous interference with the climate system, we need to move away from business as usual.” -- Professor Ottmar Edenhofer

That report warned that carbon dioxide (CO2) emissions from burning fossil fuels are still rising far too fast, even with more than 650 billion dollars invested in renewable energy in the last three years. However, over the same time period even more money was invested in getting more fossil fuels out of the ground.

The latter investment is keeping humanity and the planet locked onto a devastating path of a global temperature increase of four to five degrees C, the IPCC’s Working Group III report warned.

Scientists and economists say that unlocking ourselves from disaster will require a massive reduction in emissions – between 40 percent and 70 percent – by midcentury. This is can be readily accomplished without inventing any new technology and at a reasonably low cost, reducing global economic growth by a comparatively tiny 0.06 percent.

“It doesn’t cost the world to save the planet,” economist Professor Ottmar Edenhofer, who led the IPCC team, said at a press conference.

It does mean an end to investments in expanding fossil fuel infrastructure as the annual growth in CO2 emissions from burning oil, coal and gas must peak and decline in the next few years. The atmosphere already has 42 percent more CO2 than it did prior to 1800.

This extra CO2 is trapping more heat from the sun, which is heating up the oceans and land, creating the conditions that spawn super storms and extreme weather. And it will do so for the next 1,000 years since CO2 is a very durable molecule.

“There is a clear message from science: To avoid dangerous interference with the climate system, we need to move away from business as usual,” Edenhofer said.

The IPCC’s first report released last September as part of its Fifth Assessment Report (AR5) clearly stated once again that the climate is changing rapidly as a result of human activity and urgent action is needed.

This was followed last month with a strong confirmation that climate impacts are already occurring on every continent and throughout the world’s oceans. This second report warned that one of the major impacts will be declines in food production unless emissions begin to decline.

The fossil fuel sector, the richest in human history, appears to be ignoring the IPCC warnings.

Earlier this month, oil giant ExxonMobil issued a report to its shareholders saying it does not believe the world will curb CO2 emissions and plans to extract and sell all of its 25.2 billion barrels worth of oil and gas in its current reserves. And it will continue investments hunting down more barrels.

“All of ExxonMobil’s current hydrocarbon reserves will be needed, along with substantial future industry investments, to address global energy needs,” said William Colton, ExxonMobil’s vice president in a statement.

The IPCC agrees oil, gas and coal will still be used in future but there is a CO2 maximum to have a reasonable chance of staying below two degrees C. That fossil energy cap won’t be enough to meet global energy needs so Working Group III recommends shifting to large-scale bioenergy and biofuels, waste incineration, nuclear power and carbon capture and storage (CCS).

These energy sources are controversial and risky. Large-scale bioenergy and biofuels needs huge areas of land and vast quantities of water and will compete with food production.

The IPCC acknowledges bioenergy and biofuels can increase emissions, destroy livelihoods and damage the environment, says Rachel Smolker of Biofuelwatch, an environmental NGO.

“It is a shame they put so much stock in something that would make things worse rather than better,” Smolker told IPS.

Given all this, what climate action plans are governments going to propose when they meet in Abu Dhabi on May 4 and 5th? This is an informal ‘put your cards on the table’ regarding a new set of commitments on emission reduction targets and action plans to be made public at the U.N. Climate Summit in September.

In hopes of getting countries to increase their reduction targets, U.N. Secretary-General Ban Ki-moon asked governments to bring new proposals to New York City in September. With the current U.N. Climate Change Convention meetings deadlocked on key issues, the New York Summit is intended to kick-start political momentum for an ambitious, global, legal climate treaty in 2015.

The May get-together titled the “Abu Dhabi Ascent” is the only meeting before the Summit where governments, and invited members of the private sector and civil society will come together to explore how to get ambitious action to reduce emissions.

The Abu Dhabi meeting will be a window into the future of humanity: ascent or descent?