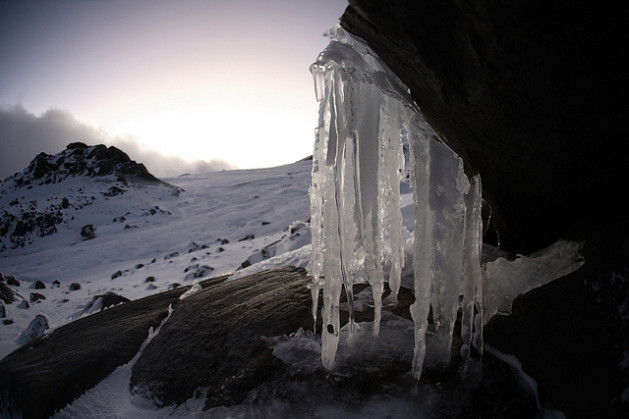 The melting of Mexico’s Orizaba glacier is another consequence of global warming. Credit: Mauricio Ramos/IPS

The IPCC’s new 36-page summary of the latest science includes a warning that there is a 20-percent chance the massive Greenland ice sheet will begin an irreversible meltdown with only 0.2 degrees C of additional warming. That amount of additional warming is now certain. However, it would take 1,000 years for all the ice to melt.

"Every word in the 36 pages has been debated. Some paragraphs were discussed for over an hour." -- Thomas Stocker, co-chair of IPCC Working Group I

“The new report is yet another wake-up call saying we are in deep trouble and heading for dangerous levels of climate change,” said David Cadman, president of ICLEI , the only network of sustainable cities operating worldwide and involving  1,200 local governments.

“The IPCC will be attacked by fossil fuel interests and their supporters….They will try and scare the public that taking action puts jobs and the economy at risk,” Cadman told IPS. “That’s simply not true. It’s the opposite.”

The IPCC’s summary of its Fifth Assessment Report (AR5) released in Stockholm clearly states that humans are warming the planet, confirming previous reports dating back to 1997. Since the 1950s, every decade following has been warmer than the previous one, it says.

“Temperatures between 1983 and 2012 are the warmest in the past 1,400 years [in the Northern Hemisphere],” said Thomas Stocker, co-chair of the IPCC Working Group I.

In response to media reports about a so-called “warming hiatus”, Stocker said the climate system is dynamic, with more heat likely going into oceans in recent years and slightly slowing the rate of surface temperature increases.

The science around climate change is well established. More than 100 years ago, researchers demonstrated that carbon dioxide (CO2) traps heat from the sun. Burning fossil fuels, deforestation and other human activities put additional CO2 into the atmosphere, where it remains essentially forever. That additional CO2 is trapping additional heat, as it acts like another layer of insulation.

More than 90 percent of this additional heat energy is being absorbed by the oceans, according to the AR5, officially known as the Summary for Policy Makers. This explains why temperatures at the surface are not higher than today’s global average increase of 0.8 C.

The summary highlights the fact that the decrease in Arctic sea ice over the last three decades is “unprecedented” in the last 1,450 years. This year’s summer sea ice melt was less than last year’s record, but it still was the sixth lowest ever measured. The report says the Arctic is on track to be ice-free in summer before 2050, much sooner than previous reports projected.

The AR5 is a five-year effort by hundreds of scientists from 39 countries to assess, evaluate and synthesise the findings of 9,200 peer-reviewed scientific studies published since the last review in 2007, called the AR4. The IPCC does not do any research itself and is run by 110 governments who spent the last four days approving the final wording of the summary.

“Every word in the 36-pages has been debated. Some paragraphs were discussed for over an hour,” Stocker said at a press conference in Stockholm.  “No other science report has ever undergone such critical scrutiny.”

The 2000-plus page full report of Working Group I on the physical science underlying climate change will be published Monday. That is the first of four IPCC reports to be released in the coming year.

The cautiously-worded Summary for Policy Makers details and confirms the observed impacts such as increased temperatures, precipitation changes, weather extremes and more. It also confirms these and other impacts will worsen as CO2 emissions increase. Current CO2 emissions levels are at the top of the worst-case scenario.

“Do not misunderstand the low end of the temperature and other ranges in the report,” said Michel Jarraud, secretary-general of the World Meteorological Organisation.

“Those are only possible if we completely stop emitting CO2,” Jarraud said.

The AR5 summary says the Greenland ice sheet lost an average of 215 billion tonnes of ice a year between 2002 and 2011. More recent studies show the ice lost has increased substantially since that time.

According to AR5, there is a one in five chance the Greenland ice sheet will melt entirely if global temperatures climb from 0.8C to more than 1.0C as is now inevitable. One of the reasons is that temperature increases in the Arctic are nearly three times higher than global average.

The 50-50 point for an unstoppable meltdown of Greenland leading to a seven-metre sea level rise is less than 4.0C.

Despite this, the AR5 says global sea level rise is not expected to be greater than one metre this century, higher than the 2007 estimate. Other scientists, including James Hansen, former head of NASA’s Goddard Institute for Space Studies, say the observed accelerated melting of the Arctic, Greenland, Antarctic and world’s glaciers is a sign that a multi-metre rise in sea levels is possible this century unless emissions decline.

Even before the IPCC’s new report was made public, it was attacked and misrepresented by “climate change denialists” trying to paint its findings as radical or extreme, said Charles Greene, a professor of earth and atmospheric sciences at Cornell University in New York State.

Greene is referring to a well-documented propaganda effort by some in the fossil fuel industry as well as extremist right-wing organisations attempting to confuse the public about the reality and urgency of global warming.

“In fact, the IPCC has a long track record of underestimating impacts” of climate change, Green said.

Most national governments are failing to lead which clearly reveals the power and influence of the fossil fuel sector, Cadman says. “Cities could do 10 times more but they simply don’t have the money.”