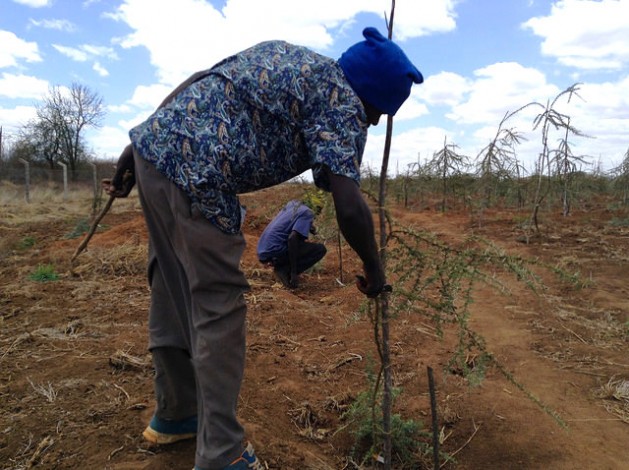 NAIROBI, Oct 25 2016 (IPS) - Faced with growing degradation that is swallowing large swathes of land in arid and semiarid areas, Kenya is heavily investing in rehabilitation efforts to stave off the threat of desertification.

Charles Sunkuli, secretary of the Ministry of Environment and Natural Resources, says a programme targeting 5.1 million hectares of degraded and deforested land for restoration by 2030 was launched in September 2016. He added that Kenya is increasing its forest cover from the current seven percent to a minimum of 10 percent.

“We have introduced an equalisation fund to help communities living in dry and degraded lands eke out at a living and participate in rehabilitation initiatives,” said Sunkuli.

He was speaking in Nairobi during the Fifteenth Session of the Committee of Review of the Implementation of the Convention (CRIC 15) of the United Nations Convention to Combat Desertification (UNCCD), which concluded last week.

Afforestration, he noted, will mainly be done in the country’s arid and semiarid areas which make up 80 percent of Kenya’s land cover, although other areas of the country to are being targeted too.

To succeed in its ambitious endeavour, Sunkuli said Kenya is implementing a programme to promote drought-tolerant tree species such Melia volkensii (locally known as Mukau) in the country’s vast drylands to increase forest cover.

Indeed, Kenya is heavily investing in research into drought resistant trees to enhance afforestration of dry lands and improve livelihoods. At Tiva in the dry Kitui County, eastern Kenya, the Kenya Forestry Research Institute (KEFRI) has established a research centre to breed tree species ideal for planting in arid and semiarid areas. The centre is supported by the government in partnership with the Japan International Cooperation Agency (JICA).

James Ndufa, director of the Drylands Eco-region Research Programme (DERP) at KEFRI, says growing population and conversion of forest into farms has led to unsustainable land use, thus contributing to land degradation and desertification.

Ndufa says the Tiva centre focuses on developing drought-tolerant trees for adaptation to climate change in dry lands. “Breeding is done to adapt tree species to much warmer and drier weather conditions linked to climate change,” he says.

Breeding is undertaken by the conventional method of selecting better performing trees. Ndufa says they intend to provide farmers with genetically improved seeds that are drought-tolerant, fast growing and produce quality timber in addition to fodder for livestock. This, he says, will eventually aid in rehabilitation of degraded land and conserve biodiversity.

DNA analysis is undertaken during selection and grafting is done to achieve desired results. They thus have established a seed orchard and progeny test site for Melia (Mukau) and acacia species.

The centre is located in a semiarid area that receives just 700 ml of rain per year. Farmers have meagre harvests and as a result they put pressure on natural resources by overexploiting them. Ndufa says the communities depend on cutting trees for charcoal sold in places such as Kenya’s capital Nairobi, leading to deforestation and land degradation.

Others wantonly harvest sand thus affecting the vegetation and causing land degradation. He adds that Mukau timber fetches 100 Kenyan shillings (one US dollar) per foot. “Approximately 400 trees can be grown on one hectare and when mature can yield between two million to two and half million Kenya Shillings (USD 200 -250,000),” he says .

According to Ndufa, the two tree species they are targeting have been overharvested. Mukau, whose wood is red in colour, is equivalent in value to mahogany and preferred by furniture makers, while acacia species are treasured for charcoal.

The aim is to develop fast-growing trees that can be ready for harvest in 15 to 20 years. Some 3,000 Mukau trees and 1,000 acacias have been planted on 100 hectares at the Tiva research site. About 2,500 kilogrammes of seeds have so far been collected.

They are also exploring breeding varieties from the two species which can retain leaves for a long period to serve as fodder for livestock such as goats. The project is also undertaking extension work to distribute seeds and create awareness about the trees using field trips, agriculture shows and field days.

The trees are easy to manage so women famers are increasingly adopting them. Veronica Kioko, a resident of Kitui county, says low adoption rates in some areas could be linked to food insecurity and poverty.

She said that although farmers have been educated about the benefits of the trees, they find waiting for 15 to 20 years for trees to mature before harvesting difficult. She says trees are mainly cut for making charcoal before they fully mature.

The situation is exacerbated by drought and hunger and fuelled by the overall state of poverty in the region. “People usually go without food when seasons fail, and without money they cut trees for charcoal and sell it cheaply,” said Kioko.

In terms of acacia breeds, Ndufa says the aim is to develop a variety that produces a lot of pods, branches and leaves to feed goats and camels apart from timber.

Frank Msafiri, chair of the Kenya chapter of the East African Sustainability (SusWatch) network made up of nongovernmental organisations from East Africa, says large-scale national and cross border interventions are necessary to combat desertification and land degradation.

“Players from sectors such as water, forest, agriculture and research bodies in Africa should not pursue conflicting strategies. They should harmonise their strategies under the umbrella of sustainable land management,” stresses Msafiri.

Speaking during the CRIC 15 in Nairobi, Monique Barbut, executive secretary of the UNCCD, said many countries engaged in land restoration have recorded positive results. Giving the example of Ethiopia, she said the land restored under that plan withstood the El Nino-related drought that affected eastern and southern Africa for the last year.