The author is the Executive Secretary of the United Nations Convention to Combat Desertification (UNCCD), which co-organized with the Namibian government the Africa Drought Conference on 15-19 August in Windhoek. This Op-Ed is based on Barbut’s opening speech to the Conference High –level Segment.

In 2015/2016 this “El Niño effect” led to drought in over 20 countries [2].  There were scorching temperatures, water shortages and flooding around the world.  Worst hit were eastern and southern Africa[3] 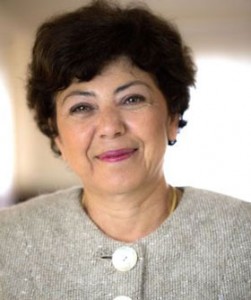 To understand what that means for people, you just have to look at the numbers about food insecurity[4].  32 million people in southern Africa were affected by food insecurity as a result.  Across Africa, 1 million children required treatment for severe acute malnutrition.

And though the worst of the drought is coming to an end, predictions are high (at about 75%) that La-Nina will arrive later in 2016. La Nina – El Niño’s opposite number – is known for the flooding it brings.

There may not be much relief for policy makers and people across Africa before the end of the year.

But then, if will be over, we can breathe again.  We can go back to business as usual – right?

Well…if you will allow me…for Albert Einstein…one of the definitions of insanity is “doing the same thing over and over again and expecting different results”.

Going back to business as usual fits this definition of insanity very well.

Unless we change our approach, when drought comes and the rains fail, the future of the 400 million African farmers who rely on rain fed subsistence agriculture, for example, is put in jeopardy.

Rain-fed agriculture accounts for more than 95 percent of farmed land in sub-Saharan Africa. And water scarcity alone could cost some regions 6 percent of their Gross Domestic Product.

Unless we change our approach, people are going to be increasingly forced to decide whether to ride out a drought disaster and then rebuild.  Or simply leave.

It is a form of madness that we force our people to make these difficult choices.

Especially if the cycle of drought disaster and recovery could be broken.

Progress is starting to happen. Mexico, Brazil, Vietnam and Morocco, to name just a few countries, are now implementing drought plans with a strong emphasis on risk mitigation and preparedness.

And in the areas where land has been restored in Central and Eastern Tigray in Ethiopia, ecosystems and people seem to have fared better in recent El Nino related droughts than areas where no restoration has been undertaken.

But because by 2050, one in four people – up to 2.5 billion people – will be living in a country at risk of water scarcity, more needs to be done. Everywhere.  We must prepare better and manage drought risks proactively.

Africa has already done a lot[7] but needs to stay on its toes.

UNCCD is proposing three important pillars for your consideration.

Declaring a drought too late can have a devastating impact on lives and livelihoods. Yet when you declare a drought, it can often be very subjective and highly political.

Africa would benefit from an effective Early Warning System (EWS) in all countries. The system would need good data and – equally important – local and traditional knowledge. It would guide you by providing timely information that you can use to reduce risks and to better prepare for an effective response.

Of course, no amount of early warning will work without action to protect the most vulnerable.

Some people and some systems are more vulnerable to drought as a result of social, economic, and environmental factors. So it is important to combine better forecasts with detailed knowledge on how landscapes and societies respond to a lack of rain.

Which communities and ecosystems are most at risk? Why are important sectors like agriculture, energy, tourism, health vulnerable?

Then turn that knowledge into early intervention.

We can assure it would be highly cost effective.  Before the cost of a single late response is reached, you can “overreact” up to six times.

We can identify measures to address these risks head on.  There are things that can be done at a very practical level to reduce drought risk, which if started right away, can deliver real and tangible benefits to your communities.

African countries could consider the development of sustainable irrigation schemes for crops and livestock or water harvesting schemes or the recycling and reuse of water. They can explore the cultivation of more drought tolerant crops, expand crop insurance schemes and establish alternative livelihoods that can provide income in drought-prone areas.

Investing in improved land management, for example, can improve on-farm water security by between 70 and 100%[9].

This would result in higher yields and more food security.   In Zimbabwe, water harvesting combined with conservation agriculture increased farmers gross margins by 4 to 7 times and increased returns on labour by 2 to 3 times. [10]

This is the type of proactive drought risk management, which could save lives and the livelihoods of millions of people, is something that we all should aspire to.

The Africa Drought Conference is a rare window of opportunity.

An opportunity for the continent to recognize that the traditional approach of “responding” to drought is no longer viable. It has proved to be ineffective far too often. Instead, Africa could lead a proactive drought revolution.

By investing in early warning systems and addressing their vulnerabilities head on, well-planned and coordinated drought action will have a positive ripple effect across sectors and across borders.

Nelson Mandela once said, “We must use time wisely and forever realize that the time is always ripe to do right”.

The time is ripe. Taking proactive action against drought is the right thing to do.

[8] Department for international development : The Economics of Early Response and Resilience Series, https://www.gov.uk/government/uploads/system/uploads/attachment_data/file/226255/TEERR_Two_Pager_July_22.pdf