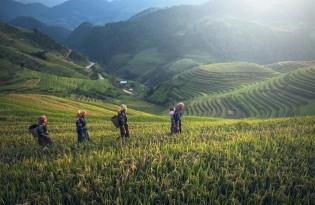 You Are More Powerful than You Think!

By Monique Barbut
Are you overwhelmed by the depressing news coming at you daily? Conflict, forced migrants, famine, floods, hurricanes, extinction of species, climate change, threats of war … a seemingly endless list. It might surprise you, but you can really make a difference on many of these issues.

By Monique Barbut
Let us start with some good news.  Sort of.  The strongest El Niño in 35 years is coming to an end. [1]

By Monique Barbut
Two months ago, I was in Agadez, a city in the middle of the famous Ténéré Desert of Niger. Agadez has become a major transit point on a hazardous journey for the hundreds and thousands of desperate people from all over West Africa trying to make it to the Mediterranean coast every year.

By Monique Barbut
For three consecutive days this week, we gave thought to our future. On International Forests Day, Monday, 21 March, we were reminded that forests are vital for our future water needs. On Tuesday, 22 March, World Water Day, we learned that half the world’s workers are involved in the water sector and some 2 billion people, especially women and girls, still need access to improved sanitation. World Meteorological Day, on Wednesday, 23 March, concluded with the warning of a hotter, drier and wetter future. A reality that is already evident and frightening, as productive land turns to sand or dust.

THE WORLD IS BLEEDING… WE CAN ALL HELP IT HEAL

By Monique Barbut
Another day, another commute from work, another trip to the market, another evening at home. We go about our daily business, largely oblivious to the ravages being inflicted upon our planet. Sure, we know about climate change and we see the oil spills on the news. But few of us realize that we may have fished out our oceans by 2050. Or that for the first time since dinosaurs walked the Earth, species of plants and animals are becoming extinct faster than new ones are evolving. In our modern, sterile, comfortable 21st century, itÂ's easy to feel disconnected from the natural world. ItÂ's easy to think that Â“biodiversity doesnÂ't have anything to do with me.Â” The truth is, biodiversity has everything to do with every one of us. Biodiversity, the vast, rich and wondrous variety of life on Earth, is all around us. It touches every part of our lives Â–from the clothes we wear to the food we eat to the jobs we hold. But for as much as biodiversity gives us, we donÂ't seem to notice how much it is threatened, both in South America and around the world. Biodiversity loss has been greater and faster in the past 50 years than at any time before in human history. If we lose biodiversity, weÂ'll lose everything about life as we have known it. Unfortunately, the news is not good. Research suggests that the world has failed to meet its 2010 goals for reducing the rate of biodiversity loss. But there is hope. All around the world, enlightened policy-makers, business leaders, civil society organizations and community leaders are working together to launch projects that meet our human needs for development and commerce, while at the same time respecting and preserving biodiversity. A great example can be found right here in Uruguay, where a variety of stakeholders came together to develop an ecosystem-based approach to the countryÂ's coastal fisheries. The goal is to transform UruguayÂ's fisheries into truly sustainable businesses, by encouraging respect for and consideration of the environment, and finding ways to work in harmony with local ecosystems. This keeps fish on the table in the short term and strengthens the fisheries in the long term. It is a prime example of the kinds of projects that can and must be replicated elsewhere in South America and around the world. But projects like this donÂ't just happen. They require dedicated funding and technical support. Governments must know that investments like this are what the world needs and what their constituents demand. To help raise awareness about the value and importance of biodiversity, and how it impacts our day-to-day lives, the United Nations declared 2010 as the International Year of Biodiversity. In that spirit, let us each embrace our sense of connectedness to the web of life around us Â–and let our voices be heard by those with the power to effect change. We are not mere bystanders when it comes to biodiversity. Nor are we powerless to help preserve it. As citizens and voters, we can and we must ensure that our elected leaders and others in power know that biodiversityÂ­just as much as poverty, hunger, literacy or healthcareÂ­is an issue that desperately demands our immediate attention. We may not be able to see it, but the world is bleeding. Preserving biodiversity is a critical first step in helping it heal. Our lives, and the lives of everything around us, depend on it. (END/COPYRIGHT IPS) (*) Monique Barbut is CEO of the Global Environment Facility, the worldÂ's largest funder of projects to preserve biodiversity.

By Monique Barbut
The Global Environment Facility has provided grants totaling more than six billion dollars since its creation 15 years ago. The third GEF assembly takes place in South Africa at the end of August.
ADVERTISEMENT ADVERTISEMENT