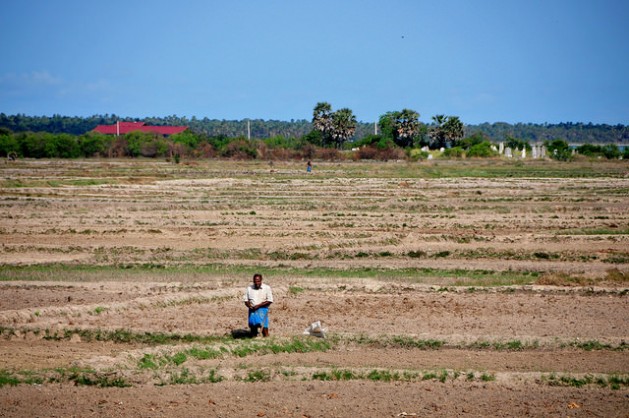 A man stands in the middle of parched paddy land in the northern Kilinochchi District, Sri Lanka. Credit: Amantha Perera/IPS

NEW DELHI/BONN, Oct 18 2016 (IPS) - One of the critical challenges facing the world today is that emerging migration patterns are increasingly rooted in the depletion of natural resources.

Entire populations are being disempowered and uprooted as the land that they rely on for their survival and for their future no longer provides sustenance.

Many people will move within their own region or to nearby cities, driving unplanned urbanisation. Up to 135 million people are at risk of distressed migration as a result of land degradation in the next 30 years, says a United Nations Convention to Combat Desertification (UNCCD) vision document.

The Sustainable Development Goals (SDGs) along with the Paris Agreement on Climate Change both envision land rehabilitation and restoration as significant actions in development and addressing climate change.

Governments from all over the world are currently meeting in Nairobi in order to agree on the strategic direction of the Desertification Convention. IPS correspondent Manipadma Jena interviewed Monique Barbut, Executive Secretary of the UNCCD, ahead of the ongoing fifteenth session of the Committee for the Review of the Implementation of the Convention (CRIC15) in Nairobi. Excerpts from the interview follow. 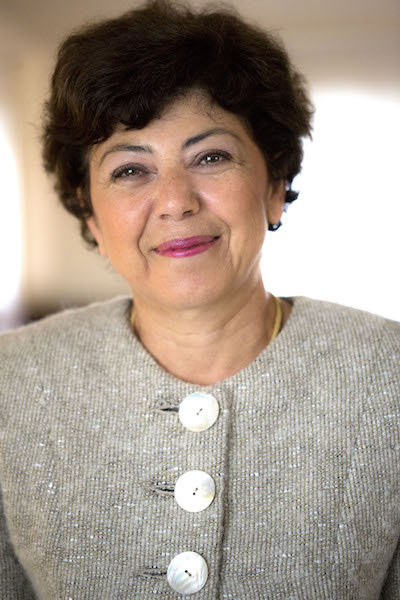 Q: With as many as 170 countries affected by drought or desertification, how could these factors drive conflicts and forced migrations?

A. Two Somali proverbs, nabadiyocaano meaning ‘peace and milk’ and col iyoabaar which means ‘conflict and drought’, illustrate the strong connection between stability and access to pasture and water. The world’s drought-prone and water scarce regions are often the main sources of refugees.

But neither desertification nor drought on its own causes conflict or forced migration. But they can increase the risk of conflict and intensify ongoing conflicts. Converging factors like political tension, weak institutions, economic marginalisation, lack of social safety nets or group rivalries create the conditions that make people unable to cope. The continuous drought and water scarcity from 2006 to 2010 in Syria is a recent well-known example.

Droughts are natural phenomena, they are not fated to lead to forced migration and conflict. Severe droughts also occur in countries like Australia and the United States, but government intervention has made these experiences bearable.

For poor countries where safety nets do not exist, the intervention of the international community is vital.

In Mali, for example, unpredictable and decreasing rainfall seasons have led to a decline in harvests. More and more herders and farmers’ are moving into cities searching for employment. In Bamako, Mali’s capital, population in just over 20 years has grown from 600,000 to roughly   2 million with living conditions becoming more precarious and insecure. As Lagos fills up with those fleeing desertification in rural northern Nigeria, its population now 10 million. Disillusioned, unemployed youth are easy prey for smugglers, organised drug and crime cartels, even for Boko Haram.

Pastoralists face similar challenges when they are compelled to move beyond their accepted boundaries in search of water and pasture and risk clashing with other populations unwilling to share resources. Clashes between pastoralists and farmer are a serious challenge for governments in Somalia, Chad and Niger.

Q: Which other countries are showing signs of vulnerability to extreme droughts in the near future?

A: Drought occurs in almost every climatic region. With climate change, droughts are expected to spread to new areas and to become more frequent and more intense. The vulnerable regions are Sub-Saharan Africa, the Middle-East and North Africa, South-Eastern Europe, Central Asia, Australia, Brazil, India, U.S. and China. In the coming decades, most of the United States, the Mediterranean region, Southwest Asia, Western and Southern Africa and much of Latin America, especially Mexico and Brazil, will face extreme droughts.

The more important question, however, is “who is going to be affected and what can be done about it?” The livelihoods of the poor in developing countries will be the most impacted because they rely heavily on natural resources.  So, more investment is needed to incentivise them to adopt sustainable land management (SLM).

But frankly, the investments we have for land rehabilitation are insufficient. We must also improve land tenure security because farmers with secure ownership are more likely to adopt good practices. Improving access to markets and rural services will create alternative non-farm employment, reducing pressure on land and the impacts of droughts in turn.

Q: A lot now hinges on achieving Land Degradation Neutrality (LDN) which requires a paradigm shift from ‘degrade-abandon-migrate’ to ‘protect-sustain-restore’. UNCCD aims to achieve LDN by 2030.  Given the tremendous and diverse pressures on land for economic growth, also from large populations in regions like Africa and Asia, where do you see their achievements in 14 years?

A. We want to move from business as usual to a future where the amount of productive land passing from one generation to the next remains stable.

In the current scenario, large numbers of people and a large share of national economies are tied to the land sector, particularly in the developing countries. So any degradation of the land reduces a country’s productivity. Unsustainable land use practices costs Mali about 8 percent of its gross domestic product, for example.

By 2030, along with a higher world population, a large middle class will emerge, accelerating the demand to draw more from these land-based sectors. For Africa and Asia to bridge these gaps, the farmers need to keep every inch of their land productive. This switch to sustainable land management however needs strong government support – to move farmers to scale up these good practices, to recover degraded lands and to prevent losing the most productive lands to urbanisation.

Reforms would move credit, market access and rural infrastructural development to ignite sustainable growth in agriculture. This is what it will take, to achieve land degradation neutrality by 2030.

The Great Green Wall of the Sahara and the Sahel Initiative that seeks to restore degraded lands and create green jobs in the land-based sectors is a good example of this vision. The Desertification Convention is working with partners around the world to develop initiatives that are linked to the Sustainable Development Goal (SDG) target of achieving land degradation neutrality by 2030.

Q: Which countries are faring better in turning around land degradation and what is the key factor driving this achievement?

A. A 2008 global assessment showed that most of the land restoration since 1983 was in the Sahel zone. But we have seen a rise in global attention to land degradation through diverse initiatives. that include the Conventions on Biological Diversity and Climate Change,the Bonn Challenge on Forest and Landscape Restoration and the New York Declaration on Forests. There are also regional initiatives such as Initiative 20×20 in the Latin America and the Caribbean, Africa’s Great Green Wall and initiative AF100, also in Africa.

Once the SDGs were adopted last year, our ambition for 2016 was to have at least 60 countries committing to set voluntary national targets to achieve land degradation neutrality by 2030. We have surpassed that target. Today, we have more than 100 country commitments.

This achievement is due, in part, to the success of a pilot project that enabled 14 countries to assess and politically communicate the potential returns each would get by reversing land degradation in target areas. Armenia, Belarus and Ethiopia could quantify how they could meet their national obligations under the climate change agreement by pursuing land degradation neutrality.

Some common patterns among the countries that tend to fare better in fighting land degradation and drought (DLDD) is strong government leadership that values the socio-economic benefits accruing to their people and political commitment to make effective policies. They also have active champions of good land use practices which can be NGOs, development and private sector partners as well as small and large farmers.

Q: UNCCD is open to private business funding for projects under LDN. Which type of projects would businesses -for- profit show investment interest?

A. There is a growing appetite in the private sector for sustainable land use projects that can contribute to land degradation neutrality. More industry players have committed to LDN-related initiatives and other environmental targets. Companies committing to reduce the ecological impacts of their commodity supply chains rose from 50 in 2009 to nearly 300 by 2014, Supply Change reported in 2016. Many businesses dealing in agricultural and/or forestry commodities get raw materials from the land, and may be interested in investing in projects that make their supply chains more sustainable.

But there is no dedicated public funding pool investing globally in projects to combat land degradation, and public financing alone is not sufficient to protect our planet’s ecosystems. The private sector needs to step up. This is what created the need and opportunity for a new dedicated funding source –the LDN Fund. It combines public and private capital in support of the SDG target of land degradation neutrality.

The sustainable agriculture, sustainable forestry (including agroforestry), land rehabilitation and conservation, and the ecotourism sectors can support profitable investments. Forestry has attracted 77 percent of all capital raised for LDN investments to date. Agriculture is expected to see the strongest increase in investments and to grow by nearly 350 percent by 2021. It is clear that projects that incorporate at least some component of food and/or timber production are more likely to generate a stable cash flow are more appealing to private investors in LDN.

In the developed countries, many of the conservation activities receiving private investment are backed by government legislation. A strong regulatory framework provides certainty to the market and helps to create end buyers. As a result, the investments attract steady flows of private capital.

Q: Do governments need to put in place smallholder-safeguard mechanisms for private investments in land?

A. Safeguard mechanisms that recognise the land rights of smallholders are vital, even when the farmers have no formal tenure. Smallholdings support billions of livelihoods, which makes these households extremely sensitive to land use change.

In developing countries, government policies designed to attract investment are often biased towards large-scale farming, and hardly offer the protection to smallholders require. Private investors should have their own safeguards but governments have a responsibility to implement and enforce mechanisms to protect smallholders. The LDN Fund is designed to align with progressive global environmental and social standards.