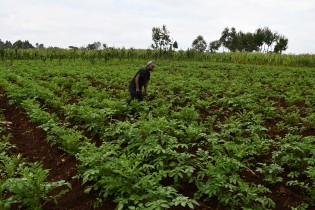 By Justus Wanzala
As the clock ticks down to Kenya’s general elections slated for Aug. 8, a move by the Kenya Communication Authority (CAK) to make journalists adhere to guidelines on election coverage has elicited fear that the government could be trying to control how they report on the polls.

By Justus Wanzala
Emma Masibo and Lucy Bwire have many things in common.

By Justus Wanzala
With Kenya’s meteorological records over the last 50 years indicating increased irregularity and variability in precipitation, the effects of changing climate are hitting hard. Rising temperatures as well other forms of extreme weather events in form of droughts and floods are a common feature.

By Justus Wanzala
Extreme weather conditions, an impact of climate change faced by African countries despite contributing the least global emissions, is attracting the attention of many as the clock ticks towards the start of the 2015 United Nations Conference on Climate Change (COP21).
ADVERTISEMENT ADVERTISEMENT