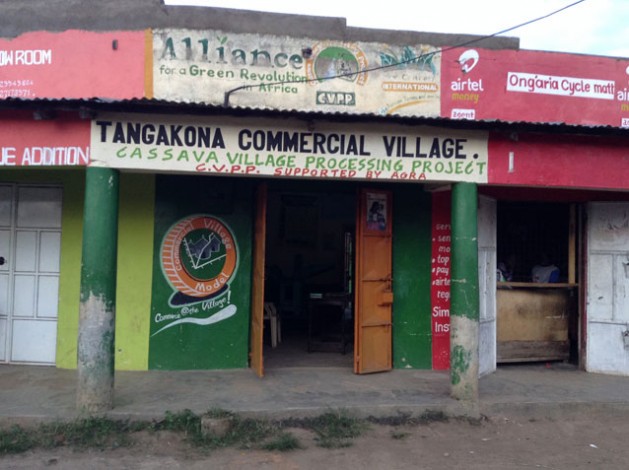 BUSIA, Kenya, Jan 19 2016 (IPS) - High incidents of poverty coupled with decreasing land acreage amid a changing climate pouring havoc on weather patterns has compelled farmers in the Tangakona area of Busia County in western Kenya to embrace an innovative initiative to improve livelihoods.

The farmers cultivate cassava and orange fleshed sweet potatoes (OFSP,) both of which are drought resistant, under an initiative that involves value addition to the two tuber crops and is dubbed a “Commercial Village. “

The initiative is generating income and ensuring food security not only at Tangakona but for the entire Busia County. The farmers grow the crops in groups or individually but process and sell the products collectively.

Initially the farmers, who are mostly peasants, grew cassava and sweet potatoes mainly for domestic consumption.

This has since given way to commercial cultivation of the two. They have also established a cooperative society under which they save their money and have access to loans.

A key aspect of the commercial village is the value addition to the two crops. From the cassava and OFSP they make products such as cakes, crisps, fries, scones and flour for making chapattis (flat pancakes) and mandazi’s (Swahili buns) among other products. The products attract many buyers and fetch better prices.

According to Catherine Amusugut, who is in charge of value addition, the Commercial Village concept which began in 2011 has roots in a self help farmers group established in 1999. The concept was introduced by Farm Concern International, an Africa-wide market development Agency which promotes marketing models appropriate for smallholder farmers.

A commercial village is an umbrella of registered self-help farmers groups that partner in the production of crops, processing and marketing. Amusugut said that the village was started with 11 groups and 196 members but has since grown to incorporate individual members. Currently it serves over 10,000 people all growing cassava and OFSP.

“By coming together we have been able to increase production, enhance the quantity of our products and sustain the market needs,” said Amusugut. The two tuber crops have improved food security and income levels of the local communities.

Maurice Olaba who is in charge of production at the Commercial Village says there are 11 groups with about 200 members in the Tangakona area who engage in cassava farming. The Commercial Village collaborates with several organisations to support farmers at different aspects of the cassava and OFSP crops value chain. The organisations include Kenya Agriculture and Livestock Research Organisation (KALRO), Kenya Plant Health Inspectorate Service (KEPHIS), Western Kenya-based Rural Energy and Food Security Organization [REFSO] and the International Institute of Tropical Agriculture (IITA), an organisation involved in tuber crops research for fighting hunger and poverty, Alliance for Green Revolution in Africa (AGRA) and One Acre Fund, a nonprofit organisation that supports smallholder farmers in East Africa with asset-based financing and agriculture training services. Others are Farm Concern International and Kenya’s ministries of Agriculture and Industrialisation.

He adds that due to the market demand for consistency and quality, the introduction of the commercial village concept introduced by Farm Concern International has ensured reliable supply of their products to the market. “Our crop output has grown immensely so that we supply several tonnes to the market,” said Olaba. Although they work with organised groups, individual farmers are welcomed as members. “Our entry point was tuber crops-cassava and OFSP, we are mulling venturing into soya beans and finger millet cultivation,” he added.

In Tangakona alone the cassava crop occupies 50 acres and it is at various stages of growth with OFSP occupying over 60 acres. With a countywide membership, thousands of acres under the two crops, “Our seeds are certified by KEPHIS and we supply them to farmers in neighbouring counties too, through an arrangement with One Acre Fund,” he said.

Olaba says that among the aims of the formation of the Tangakona Farmers Self Help Group was to ensure large quantity production of the tuber crops. This was meant to meet their growing demand owing to a rapid population growth as production of maize, the staple food crop declined, “The cultivation of cassava and the OFSP was noted as key to ensuring food security in the community” he stressed.

He added that they were keen to ensure income generation among the peasant farmers to ensure improved livelihoods. Through the cultivation of OFSP, which are rich in vitamins such as vitamin ‘A’, he said they also aimed to improve the health of area residents.

Olaba said the resilience of the two tuber crops cannot be downplayed. He observed that husbandry requirements of the two crops fits into the ecological conditions of Busia County. “The crops can be grown year round even when rains are low,” he revealed. He noted that the crops do not require complex skills to cultivate as well as expensive inputs.

Farmers who sell their products through the Commercial Village contribute about five cents every time they deliver their products. The money is converted into individual member shares by the cooperative.

Olaba explained that in Busia County there is low awareness among farmers on the role of cooperatives. This, he said, undermines recruitment of new members.

Members’ sources of income are also meagre so they are unable to marshal enough capital to expand production. Another impediment to farmers, notes Olaba, is dwindling land sizes. He says the average farm acreage in the county is just two hectares. This curtails expansion of production.

Ekisa lamented that they were unable to grow their capital base because financial institutions considered their member a high risk group to grant loans. Some food processing companies buy produce from the Commercial Village, however, said Amusugut, some companies also delay releasing payment to farmers.

Although the Commercial Village is engaged in value addition, it has yet to acquire the Kenya Bureau of Standards certification. This denies the products access to some markets in Kenya.

Olaba says farmers need to be empowered to expand production because currently they have an agreement to supply three tonnes of OFSP per week to a food processing firm in a neighbouring county but their production capacity is below par.

According to Ekisa another shortcoming is that cassava and sweet potatoes are treated as a poor man’s crop in Kenya. “The perception has rendered them “orphaned crops” because many farmers ignore them due to the consumer preference of maize and beans,” he stated.

The Commercial Village has had a great impact on Tangakona community, said Charles Olweyo Oliwa. Along with other farmers he was trained to farm commercially by KALRO and REFSO and acquired skills in cultivation of cassava and OFSP.

Oliwa said the Commercial Village is promoting agribusiness through enabling farmers to keep abreast with emerging technologies in OFSP and cassava husbandry. Apart from the tubers, he sells potato vines, cassava cuttings, grown on his four-acre farm. He uses the money to pay for his children’s fees and health care. He said that the potato vines sold as seedlings to other farmers generate are a regular source of income for they mature in a period of three months and can be harvested three times a year. A bag retails at five dollars and some farmers manage to produce 1000 bags.

“I want to expand production of cassava and potatoes but I lack capital to hire labour and purchase the seed materials. I will appreciate if I got a soft loan to grow my production,” he said.

Oliwa said the leaves from the two tuber crops are sold to livestock farmers as fodder for animals like rabbits and are also consumed as vegetables. Potato peelings are also used as livestock feed as well as making compost manure. “Nothing is wasted,” he said.