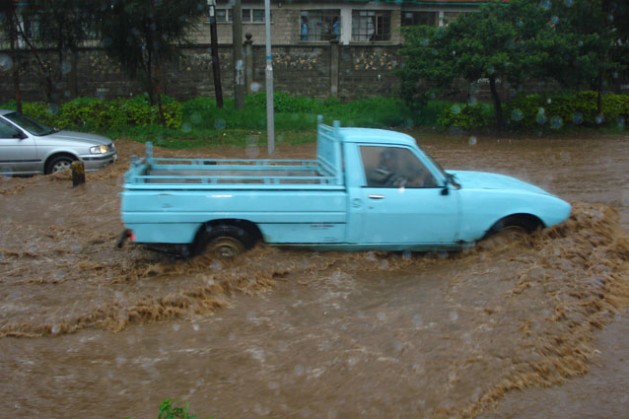 Flooded streets in Kenya’s capital city Nairobi after the city being pounded by above normal rains. Credit: Justus Wanzala/IPS

NAIROBI, Nov 28 2015 (IPS) - Extreme weather conditions, an impact of climate change faced by African countries despite contributing the least global emissions, is attracting the attention of many as the clock ticks towards the start of the 2015 United Nations Conference on Climate Change (COP21).

Severe weather events are causing significant loss of life and livelihoods among communities in Africa. The situation is a major challenge to African governments given that the probability of occurrence of events is continuously changing alongside associated risks. Extreme weather events in Africa are higher temperatures, drought, flooding and diseases.

Emmanuel Oluyakode Oladipo, an expert on climate and one of Nigeria’s lead negotiators for the United Nations Framework Convention on Climate Change Conference of Parties and who is expected to pitch the case of Africa during the COP21 to be held in Paris from November 30 to December 11. He said African countries have an uphill task in tackling hazardous weather events. This he says is because climate dynamics are very complex, more so than the operations of tropical systems which are yet to be fully understood.

Speaking during the Seventh Annual Media briefing on Climate Change organised by Centre for Science and Environment (CSE) for Global South journalists from 6 November 2015 in New Delhi, India, Oladipo noted that closer collaboration between scientists and policy-makers is a priority for Africa if the continent is to tackle the growing challenge of extreme weather patterns.

Oladipo, who is also a climatology professor, said that climate change is compounding the difficult situation in which Africa finds itself in terms of ensuring food security and securing livelihoods. “Extreme weather events results into unnatural disasters. Rains come but they are not useful to farmers. For instance, in Nigeria in 2015 there was no rain in southern parts of the country only falling in August when it was least expected with November having three days of unexpected rain,” he said.

But as severe weather events increase alarmingly with heavy economic losses, most African countries are unable to assess current trends and future scenario due to lack of data. “Lack of in-depth research is affecting availability of data,” said Oladipo. He noted that only South Africa is committing significant resources to climate research.

The situation is negatively affecting the capacity of the continent to adapt or to address loss and damage from the changing risks.

“Such kinds of research have the potential to be useful for climate change adaptation, but there is a need to explore applications in vulnerable developing countries, particularly those in Africa,” he stated.

Of concern also is the weak nature of response mechanisms to extreme weather impacts in Africa. Oladipo argues that to effectively respond to the chaos of climate change preparedness, knowledge of risks, prediction, monitoring and communication are vital. He believes that community-based early warning systems such as village vigilantes trained to watch over weather are key aspects of adaptation in fighting extreme weather.

Dependency on external financing of climate change mitigation initiatives was also noted by Oladipo as a constraint. He states that an African initiative on climate financing is required for externally led initiatives sometimes tend to focus on issues which are least linked to climate change.

His views resonate with those of Mithika Mwenda; Secretary General of the Pan African Climate Justice Alliance (PACJA) who said during the #Act On Climate March in Nairobi on 14 November that funding of technologies to fight extreme weather is needed. The #Act On Climate March and Concert was organised by PACJA and its partners to help spread the word about the danger extreme weather poses for global poverty and hunger and to show that not enough is being done to slow the impacts of climate change across Africa.

RDMCOE is a regional initiative and member states are: Burundi, Democratic Republic of Congo, Djibouti, Egypt, Eritrea, Ethiopia, Kenya, Rwanda, Seychelles, Tanzania, and Uganda. Its key objective is to strengthen regional capacities for disaster preparedness and response, reduce disasters and their impact through capacity building and cooperation. RDMCOE is also engaged in promoting communication and cooperation among the participating states, mobilizing resources and improving disaster management in participating states as well as facilitating promoting and strengthening regional and international disaster management cooperation.

Amadi said the centre is engaging governments in reducing negative impacts of extreme weather. “Engaging governments in capacity building, creation of awareness and best practices at national, sub national and local level coupled with generation of broad and specific policy, institutional and development of legal frameworks is needed to tackle effects of extreme weather,” said Amadi.

He added that poor infrastructure, communication and weak institutional capacity challenges are undermining the continent’s capacity to respond to extreme weather events.

On the role of governments in tackling extreme weather, Oladipo urges African governments to design focused development plans and effective policies. He says Africa suffers from unavailability of meteorology information and most countries have no coping policy.

“Whatever we do we must put everything into our national development systems, for if you can’t link climate change to development then you can’t achieve development itself,” said Oladipo.