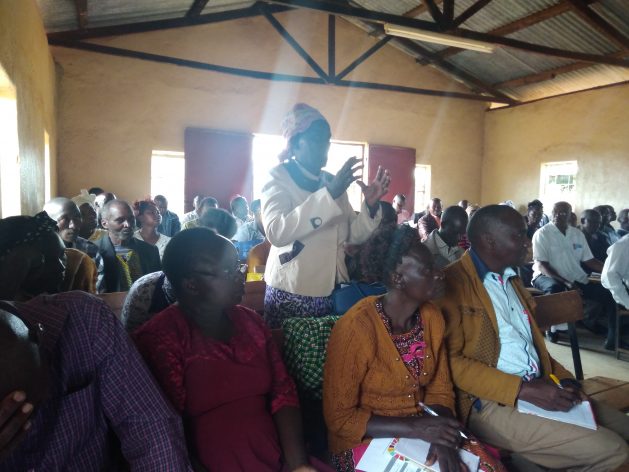 Men and women from Kalawa ward in Kenya’s Makueni County attended a forum on the United Nations’ Sustainable Development Goals (SDGs). Many said that development projects implemented for them didn’t include their views and input. Credit: Justus Wanzala/IPS

MAKUENI, Kenya, Feb 18 2019 (IPS) - Julia Mutua is a resident of Kalawa ward in the semi-arid Makueni County in Eastern Kenya and a member of a women’s farmers group that runs a poultry project.

“Women are increasingly playing a key role in economically uplifting of their households, unlike before, but they need access to affordable loans from financial institutions and requisite skills to run own enterprise,” Mutua told IPS.

When she looks around she sees the issues of poverty, and access to essential services like running water and healthcare that many in the county grapple with. She notes too that poverty has affected access to education as many parents are unable to pay their children’s school fees.

Mutua is also concerned about ensuring that people living with disabilities are included in development. “People living with disabilities have been marginalised  for long, alongside poor women and girls. To bring everybody on board in the journey to achieve SDGs, they need tailor-made interventions to address their unique challenges,” she told IPS.

But she understands the need for partnership and collaboration in attaining these development goals.
In the early morning at the end of January, she is one of a group of about 100 women and men in Kalawa Township who attended a forum on the United Nations’ Sustainable Development Goals (SDGs).

While the dialogue concentrated on effective and local participation in implementing the SDGs, the one-day forum’s main theme was ‘Leave no one behind’. Apart from local participants, also in attendance were representatives from Kenya’s National Treasury State Planning SDGs Unit, Voluntary Services Overseas (VSO), Islamic Relief and Caritas International.

The initiative is part of the International Civil Society Centre’s programme that involves working with governments, ordinary citizens and civil society to obtain community-driven data on marginalised communities.

The project is still in its pilot phase and is taking place in Bangladesh, India, Kenya, Nepal and Vietnam.

Back in Makueni County, the dialogue is the third in a series of five that are taking place across the country. The forums began in December, with the first one taking place Kibera Slums in the country’s capital, Nairobi. A national forum will be held later this February.

But in Makueni the issues discussed included; understanding the conditions that promote the exclusion and marginalisation of various groups in society, categories of marginalised groups, and ways of ensuring their participation in decision making when it comes to the SDGs. Deliberations also included the impact of policy intervention on development outcomes for marginalised groups.

The 100 participants, most of whom are members of community-based organisation tackling development challenges, where in agreement that the dialogue provided a great opportunity to discuss issues affecting marginalised groups.

Fred Odinga, from VSO, said the dialogue offered his organisation an opportunity to understand how different groups and communities perceive the SDGs.

“We’ve observed in forums across the country that the most marginalised segments of society, like women who have never been heard before in the development process, get a chance to be heard by government officials during such events,” Odinga told IPS.

Odinga, however, said that public participation in undertaking of SDGs projects, although highly appreciated, had flaws that required addressing.

Indeed, participants expressed their frustrations saying views collected at grassroots level for county projects were rarely used in the final plans. Participants lamented that by the time decisions were made, what was aired at the grassroots level was rarely reflected because the process involved many levels of input.

They also said that many people failed to provide this input in the first place because in many cases this was only collected from city centres, which are not easily accessible for many.

“This means that their ideas are never considered in the development process,” Odinga said.

Odinga said as convenors, they were able to demystify the SDGs, “when we started [this morning] not many appeared to comprehend SDGs. Quite a number have had heard about it but couldn’t link it to the challenges they face.”

“Unfortunately, this is just a discussion with 100 people in a county with over a million. We need many similar forums to grasp the issues facing counties as they pursue the attainment of the SDGs,”  Odinga said. He added that everyone had to be part and parcel of the journey, and that nobody should be left behind.

Charles Nyakundi of VSO, who chaired a session on citizen participation when implementing the SDGs, observed that key shortcomings for this are monitoring, evaluation and accountability.

“To ensure positive change we need to let communities [financially] own projects for sustainability instead of initiating, implementing and moving away,” he explained.

Nyakundi said in earlier SDG dialogue forums in other counties they noted that most marginalised groups include the elderly, persons with disabilities and women.

His views were reiterated by Fredrick Musau, a resident of Kalawa who said that a bottom up approach in terms of identification and execution of community projects is preferred by residents. Musau is an opinion leader in Kalawa ward—a former teacher who sits in most local county committees that deal with development.

Despite being a drought-prone area, Makueni County is noted to have made huge strides in improving the lives of its people since Kenya adopted devolution six years ago. Devolution is a constitutional arrangement where decision making is vested in local administrative units or counties, with national government allocating resources. The counties are run by governors.

Stephen Odhiambo from the SDG Unit of the National Treasury in the Government of Kenya called for enhanced collaboration and partnership between all levels of government and non state actors.
He explained that an intergovernmental technical working group has been constituted to oversee the implementation of SDGs at national and county services.

Noting that the dialogue forum was successful, Odhiambo said, “Citizens should not cow from demanding for services.”

Odhiambo explained that currently no useable data was available on attaining the SDGs amongst Kenya’s communities and what was mostly used to evaluate this was proxy data.

“We are working on collecting community data. The National Treasury, National Bureau of Statistics, civil society organisations in collaboration with the Germany agency, GIZ, among others, are supporting the initiative. A lot of citizen-generated data is gathered at county level, but is rarely harnessed,” he said.

Odiambo said that there is need for a multi-sectoral approach of mapping and reaching marginalised groups where they are in order to engage them.

Crispus Mwanzoya, a national government sub county administrator was, however, concerned with the sustainability of SDG projects. But he added that contributing to the SDGs could be as simple as enhancing and redirecting a gutter on a house in order to collect rain water.

“We need to change our mindsets to attain SDGs for we’re not poor in resources but poor in mind. The government can’t do everything, we have a central role.”