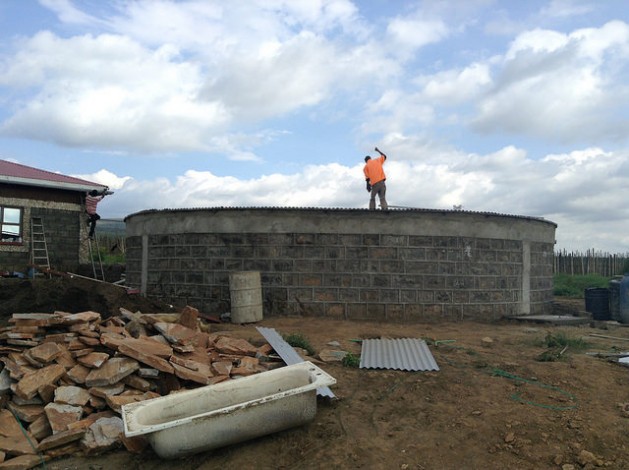 NAROK, Kenya, Jul 12 2016 (IPS) - Rainwater harvesting in Kenya and other places is hardly new. But in this water-stressed country, where two-thirds of the land is arid or semiarid, the quest for a lasting solution to water scarcity has driven useful innovations in this age-old practice.

The African Water Bank (AWB), an international nonprofit, has committed to providing and managing clean water using a much cheaper and efficient method.

The technology’s main focus is to harvest and store rainwater on a large scale. It has features such as an enhanced collection area, a guttering system and a storage system. Additional features include filters, water gauges and first flush devices.

A typical AWB rainwater harvesting system collects 400,000 to 450,000 litres of rainwater within two to three hours of steady rain. It has an artificial roof of 900 to 1,600 square metres and storage tanks. The largest tank ever constructed in Narok County has a capacity of 600,000 litres. All the units can be expanded per the owners’ needs.

This amount of water can serve a community of 400 people for approximately 24 months without extra rain. The capacity can be added at a rate of 220,000 litres per year. The system is low cost and can be 100 percent maintained locally. It also uses local skills, labour, materials and technology.

A typical AWB harvesting system collects 400,000 to 450,000 litres of rainwater within two to three hours of steady rain.

Chip Morgan, AWB’s Chief Executive Officer, says their system collects huge volumes of rainwater and conserves it in large storage tanks. “This is akin to one earning money and saving it in a bank, the reasons we are called AWB,” he says.
He adds that the size of the system installed by households is dependent on their needs.

Currently, AWB focuses on the semiarid Narok County, in Kenya’s Rift Valley region, mainly occupied by the pastoral Maasai community. The technology has also been introduced in the semiarid Pokot, Machakos, Samburu and Kajiado counties in Kenya as well as in Zambia’s Chavuma district. Most of the clients are homes and institutions such as hospitals and schools.

Construction of tanks is funded by communities, donors and individuals who pay 50 percent up front before construction begins. Morgan says that despite growing demand, they are still in a phase where people are learning of the immense potential of the initiative. “This year we are fully booked. Our target is to build 50 units in a year,” he says.

The AWB CEO, who has worked for decades in the development sector starting in his native Australia, where water scarcity is a challenge to communities residing in remote areas, argues that one of the reasons why people are poor in many parts of the developing world is lack of water.

According to the 2012 Joint Monitoring Programme’s report, access to safe water supplies throughout Kenya was only 59 percent, while access to improved sanitation was 32 percent. The situation might have improved of late, but the challenge of access to water in both rural areas and urban areas still abounds.

Due to poor access to water and sanitation, says Morgan, water, sanitation and hygiene-related illnesses and conditions are the main cause of disease among children under five.

Meanwhile, just a small tank can irrigate a greenhouse on a one-third acre piece of land, thus promoting food security. As a result, AWB is keen to work with companies involved in the provision of greenhouse irrigation services to assist communities engaged in commercial farming.

Access to water and sanitation is also vital in reducing women and girls’ workload since culturally, fetching water is their job. This enables them to attend to other activities, such as school and homework.

Morgan notes that they use both skilled and unskilled local labour and continuously train their technicians. This is essential because the emergence of plastic tanks had killed demand for concrete ones, resulting in a decline of the number of concrete tank technicians. He says concrete/masonry tanks can last a lifetime.

AWB has two engineers. They offer training to technicians from outside Kenya. Four Ugandan community-based organisations have benefited from AWB’s skills transfer programme by sending their members to be trained on AWB rainwater harvesting technology.

Wataka Stephen, a trainee from Mbale, Uganda, says he was keen to acquire skills and transfer them to Uganda. “I intend to utilize the skills that I have acquired to employ myself,” says Wataka.

Swaga Jaberi, another Ugandan undergoing training at AWB, says his home region in eastern Uganda relies heavily on boreholes, but they are drying up as the water table decreases. Borehole digging is also expensive.

AWB’s rainwater harvesting technology is unique compared to the systems common in Uganda, he says. Jaberi intends to target hospitals, schools, and community centres as his potential clients.

The AWB rainwaters harvesting is indeed beneficial to communities in the semi arid Narok County. Apart from saving livestock during perennial droughts, it is also boosting education. Tonkei Ole Tempa, headmaster of the Ilkeek Aare mixed Day and Boarding Primary School, cannot hide his satisfaction. He says  that since the school completed construction of its 600,000-litre water tank in March, it has enough water to meet all its needs.

The system has a rainwater collecting roof of 400 square metres and was put up at a cost Kenya shillings 4.3 million (USD 43,000). Ole Tempa says the school, which has a total of 410 pupils with 180 pupils being boarders, now has enough water to last from one rainy season to the next.

Ole Tempa reveals that enrolment has gone up. “In 2013 the school had only 106 pupils but this year it has grown to 410,” says the headmaster. He adds that the availability of water has enhanced the school’s feeding programme. This has improved student health and performance. Hygiene standards in the school, adds Ole Tempa, have equally improved.

Indeed, various studies commissioned by Kenya’s ministry of education and other independent bodies in the past have indicated that in schools without clean water and toilets, pubescent female pupil’s absenteeism is rampant during days when they are menstruating. This affects their performance in school, with some dropping out altogether.

According to Ole Tempa, it is because of the vulnerability of girls that they offer boarding facilities to girls as matter of priority courtesy of availability of enough water. He adds that previously they used to spend 48,000 Kenya shillings (480 USD) every three months to buy water, but since they stared harvesting rainwater, the cost is zero.

The head teacher says that they intend to establish a vegetable garden through irrigation to supply fresh vegetables to the school and also rear two dairy cows to lower spending on milk for pupils. Funds for the construction of the roof and tank were provided by the Rotary Club in Kenya and the African Water Bank partners. Parents also chipped in by contributing Kenya shillings 5,000 each (USD 50). “The input by the parents was meant to ensure ownership of the project for sustainability purposes,” he says.

The government has equally recognized the impact of rainwater harvesting technologies in arid and semiarid areas on education. Speaking in Baringo County in June 2016, Fred Segor, Principal Secretary, Kenya’s ministry of water, urged schools to practice rainwater harvesting. He said the move will reduce incidences of water related diseases among pupils.

Morgan says AWB is keen to surmount challenges such as scarcity financial constraints by partnering with financial institutions. This will eliminate dependence on donors and lessen the burden on communities which lack funds to put up large scale rainwater harvesting units.