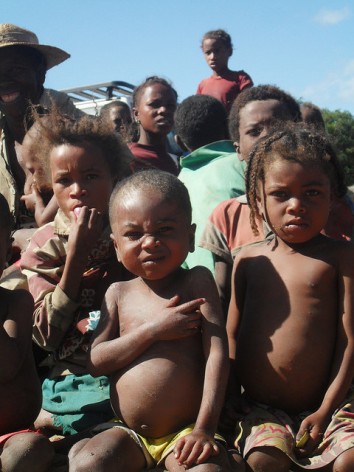 Nearly half the children in drought-stricken South Madagascar are malnourished. Credit: Miriam Gathigah/IPS

AMBOVOMBE, Madagascar, Jul 8 2016 (IPS) - Voahevetse Fotetse can easily pass for a three-year-old even though he is six and a pupil at Ankilimafaitsy Primary School in Ambovombe district, Androy region, one of the most severely affected by the ongoing drought in the South of Madagascar.

“Fotetse is just like many of the pupils here who, due to chronic malnutrition, are much too small for their age, they are too short and too thin,” explains Seraphine Sasara, the school’s director.

The school has a total population of 348 – 72 boys and 276 girls – and they range from three to 15 years. Fewer boys stay in school as they spend most of their time helping on the farm or grazing the family livestock.

The tide, however, turns when the girls reach 15 years, at which point most are withdrawn from school and married off.

But in school or out of school, nearly half of the children in Southern Madagascar have not escaped malnutrition. The United Nations World Food Programme (WFP) says that stunting –  where children are too short for their age – affects at least 47 percent of children under five.

“I feed my eight children on rice for breakfast and supper but for lunch, they have to eat cactus fruits." -- Mamy Perline

Compared to acute malnutrition, which can develop over a short period and is reversible, stunting has more far-reaching consequences.

“Stunting is a gradual and cumulative process during the 1,000 days from conception through the first two years of a child’s life,” Sasara told IPS.

It develops as a result of sustained poor dietary intake or repeated infections, or a combination of both.

“It is not just about a child being too short for their age, it has severe and irreversible consequences including risk of death, limited physical and cognitive capacities,” Sasara said.

In February this year, though the global acute malnutrition level reached an average of eight percent, it is much higher in many regions in Southern Madagascar where most districts have surpassed the critical threshold of 10 percent.

Rainfall deficit and recurrent drought in Southern Madagascar has led to the deterioration of household food security, which has had a significant impact on the nutritional status of children under five.

Sasara says that the situation has been worsened by the rice eating culture across Madagascar “where children eat rice for breakfast, lunch and supper.”

But Mamy Perline told IPS that even rice is not always available. “I feed my eight children on rice for breakfast and supper but for lunch, they have to eat cactus fruits,” she said.

According to the WFP, which runs a school feeding programme in affected districts, Tsihombe district in Androy region is the most affected, with an average of 14 percent of children under five presenting signs of acute malnutrition.

WFP estimates show that nearly 50 percent of the Malagasy children under five suffer from iron deficiency which causes anemia.

Consequently, of every 1,000 live births, 62 result in children dying before they reach five years.

The lack of clean water and proper sanitation has compounded the situation facing the South.

The education sector continues to bear the brunt of the severe drought, with statistics by various humanitarian agencies including WFP showing that the net primary education enrolment rate in Madagascar is on a downward spiral.

Though an estimated 96.2 percent of children were enrolled in 2006, the number had dwindled to 69.4 percent in 2012, with Sasara saying that the current enrolment is likely to be much lower as children are too hungry to stay in school.

This is the case in Tanandava village, Amboasary district, Anosy region, where hundreds of out of school children gather each day to receive a meal from the village canteen offered by Catholic Relief Services, a humanitarian agency working in the area.

WFP statistics further show that the number of out of school children between six and 12 years is estimated at 1.5 million, with regions such as Anosy, Androy and Atsimo Andrefana in the South of Madagascar which have high rates of food insecurity posting alarmingly low levels of school performance.

Since 2005 WFP has implemented a school feeding programme, providing daily fortified meals to nearly 300,000 children in 1,300 primary schools in the south of the country but also in the urban slums of Antananarivo, Tulear and Tamatave.

“The meals are fortified with micronutrients and are crucial in breaking the malnutrition cycle in this country,” Sasara said.

The school feeding programme is a joint community effort where parents are involved in the preparation of the food, therefore providing a platform for the implementation of other interventions geared towards improving the health and nutrition of vulnerable children.

These interventions access to water and sanitation, which are twin problems in this region.

“When it rains and water collects in potholes on the road, this is the water we collect in containers for drinking, cooking and washing. It does not matter how many cars or people have stepped into the water, it is the only source we have,” says Perline.

WFP is further providing technical assistance to the government at various levels that is expected to result in a nationally owned school feeding programme.

New modalities of school feeding will also be piloted at the start of the next school year later in September 2016.