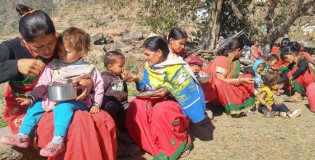 By Sonia Awale
For the first two decades after 1990, Nepal took great strides in reducing malnutrition. But progress has stalled.

By Mallika Aryal
Durga Ghimire had her first child at the age of 18 and the second at 21. As a young mother, Durga didn’t really understand the importance of taking care of her own health during pregnancy.

By Jim Lobe
Four hundred million children under 13 years of age are living in extreme poverty worldwide, according to a new study released by the World Bank here Thursday.