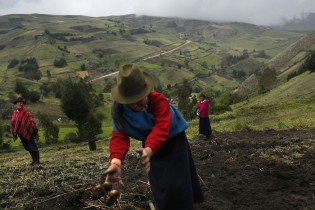 By Paloma Duran
What you eat doesn’t only affect your own health – it also affects our planet’s health. From deciding which food to buy, to how you store and prepare it, you are making decisions that have profound effect on your personal health, as well as the health of your environment.

By Paloma Duran
One of the key features of the 2030 Agenda which the United Nations and member states identified in the lead up to the SDG agreement was the principle of universality.

The Role of SDGs in Achieving Zero Hunger

By Paloma Duran
It is a well-known fact that 795 million or one in nine are undernourished in our world today. This figure only goes up to more than one in eight for the developing world. Hunger kills more people every year than malaria, AIDS and tuberculosis combined. At the same time, the food industry is a major source of jobs and livelihoods.

By Paloma Duran
The countdown has begun to September’s Summit on the Sustainable Development Goals (SDGs), with world leaders discussing the 17 goals and 169 targets proposed by the United Nations Open Working Group.
ADVERTISEMENT ADVERTISEMENT