WASHINGTON, Jul 15 2014 (IPS) - Even as aid workers are warning that children in South Sudan are falling victim to mass malnutrition, international agencies are said to be missing their fundraising goals to avert a looming famine in the country.

On Monday, Medecins Sans Frontieres (MSF), the international medical relief organisation, reported that nearly three-quarters of the more than 18,000 patients admitted to the agency’s feeding programmes in South Sudan have been children. South Sudan has experienced mounting civil violence in recent months, which humanitarian groups warn has directly impacted farmers’ ability to plant and grow crops. 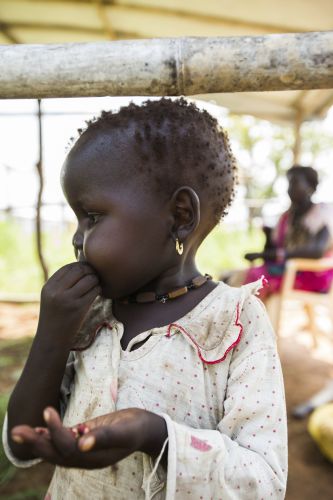 Yet even as South Sudan’s malnutrition epidemic intensifies, seven major international aid agencies, all of which prioritise food security in South Sudanese villages, may have to shut down their projects due to severe funding gaps.

Naming South Sudan to be “the most pressing humanitarian crisis in Africa,” CARE International, a U.S.-based relief agency, has stated that the United Nations’ most recent appeal for South Sudan is less than half funded.

The U.N. says some 1.8 billion dollars is urgently needed in the country, yet CARE says that seven implementing agencies are short by some 89 million dollars.

“We will be staring into the abyss and failing to avert a famine if funds do not start arriving soon,” Mark Goldring, chief executive of Oxfam, said in CARE’s report.

“This is a not a crisis caused by drought or flood. It is a political crisis turned violent. The people of South Sudan can only put their lives back together once the fighting ends. In the meantime… we are asking the public to help us with our urgent humanitarian work, but mainly we are calling on governments to fund the aid effort before it is too late.”

On Thursday, the U.S. Department of State announced it would provide another 22 million dollars in humanitarian assistance to facilitate “basic life support” in South Sudan. Yet the following day, three U.S. lawmakers wrote a letter to President Barack Obama, expressing “grave concern” over the growing conflict in South Sudan’s border region and urging “renewed diplomatic engagement” with the international community.

While solving the political problem at the root of South Sudan’s current violence is a significant priority, aid workers say the international community’s most dire concern should be for the nutritional needs of South Sudanese children.

“Many of these children have walked for days to receive medical care and food security, and these are only the ones we see,” Sandra Bulling, media coordinator for CARE International, told IPS from South Sudan. “We don’t even know about the ones hiding in the bush.”

The malnutrition crisis comes amidst tumultuous domestic politics in South Sudan, resulting in fighting that has raged since December. Some 1.5 million South Sudanese residents are now estimated to be displaced within the country, thereby decreasing their access to reliable food sources and requiring them to share already-limited supplies.

Dr. Jenny Bell, a medical worker and expert on South Sudan with the University of Calgary in Canada, acknowledges that “the nation’s health situation wasn’t brilliant before December,” but warns that the civil conflict has “compounded” the country’s medical issues.

South Sudan “already had the world’s highest maternal mortality rate, and it had been estimated that one in five South Sudanese children die before they reach age five,” she told IPS.

“But even though there had barely been enough food before, now there really won’t be enough, as [internally displaced] farmers were unable to grow crops [due to the violence], and cannot do so now because South Sudan is well into [its] rainy season.”

Adequate nutrition needs to be South Sudan’s top priority, Bell emphasises. The three leading causes of death in the country – malaria, diarrhoea and respiratory infections – are much more likely for a person to contract when he or she is malnourished, she notes.

Yet she adds that despite the “amazing agricultural potential” of South Sudan, funding for this purpose has been weak.

“The United States’ monetary aid to the region is complicated because they don’t trust the South Sudanese government,” she says. “Because of this, they’ve shifted everything to humanitarian aid, and all the development efforts have been wiped out.”

CARE’s Bulling agrees that training medical personnel is of key importance in South Sudan, adding that her focus is to work with local staff but fly in as many experts as possible.

“But it is mainly money that we need, so we can procure medicines and all of the necessary nutritional requirements,” she says.

When asked what it would take for the international community to react to the need for more funding in South Sudan, Bulling cited a technique that she says has historically been effective.

“We need to have photos of children starving and dying before the world reacts to such a disaster,” she says.

“This is what has worked for Somalia … you need these pictures to talk. For South Sudan we do all these press releases and calls to action, but as long as there is no big report with photos to show how bad the situation is, there is no response.”