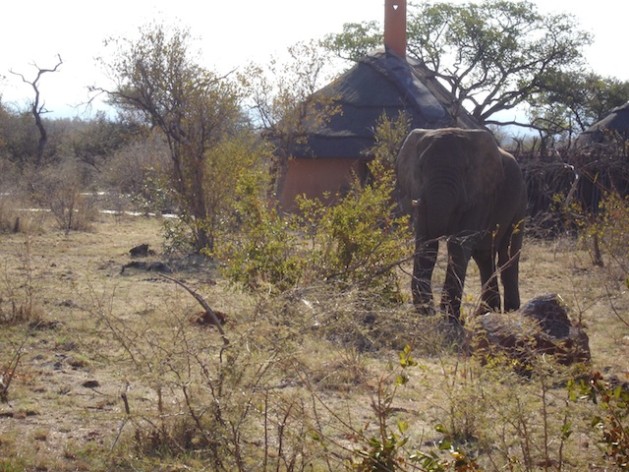 South Sudan’s wildlife, including elephants, are being used to feed troops on both side of conflict between government and forces loyal to former deputy president Riek Machar. Pictured here is a South African elephant. Credit: Nalisha Adams/IPS

JUBA, Jun 17 2014 (IPS) - While South Sudan’s President Salva Kiir and his former deputy Riek Machar agreed last week to end the country’s devastating six-month conflict by forming a transitional government within the next two months, it may come too late for this country’s wildlife as conservation officials accuse fighters on both sides of engaging in killing wild animals to feed their forces.

Poaching has always been a common practice in South Sudan. But conservationists say that since the conflict between the government and forces loyal to Machar began in December 2013, there has been an upsurge in the killing and trafficking of wildlife by government and anti-government forces as well as armed civilians.

In one incident officials arrested an Egyptian trader trying to transport several kilograms of ivory through Juba International Airport.

“During that period[January to April] alone wildlife officers seized 30 elephants’ tusks in Juba. They also seized another 12 elephant tusks from a dealer in Lantoto in Yei County, Central Equatoria state. This translates to 21 elephants dead,” Michael Lopidia, WCS’s deputy director for South Sudan.

“In that short period of time, if they can seize this high number of tusks then you can see that poaching is on the increase with conflict,” he explained.

Also between January and April, a combined force of wildlife forces and the SPLA soldiers seized over 40 kilograms of bush meant and eight leopard skins in Juba during random security checks on vehicles.

“Since the start of this conflict we have noticed that poaching has become terrible. Rebels are poaching and the government forces are also poaching because they are all fighting in rural areas and the only available food they can get is wild meat,” Lieutenant General Alfred Akuch Omoli, an advisor to South Sudan’s Ministry of Wildlife Conservation and Tourism, told IPS.

Officials say elephants are being killed for their meat and tusks while migratory animals that move in large numbers, especially the white-eared kob, the tiang (also known as the Senegal hartebeest) and reedbuck, are being killed specifically to provide bush meat.

“Our forces are also shooting wildlife animals for food. If you go from here between Mangala and Bor [just outside of the capital, Juba] you will see a lot of bush meat being sold along the road,” the director general for Wildlife in South Sudan, Philip Majak, told local radio.

The current conflict has also made it difficult for wildlife officers to stop both the government and rebel troops from poaching and is hindering their efforts to conduct routine patrols in national game parks and wildlife reserves.

“Wildlife officers have run away from their work stations, which means they can no longer conduct routine patrols to prevent poaching. So criminals and gangs can now easily kill animals in the bushes,” Omoli said.

“Things will only get better when peace is restored, fighters return to the barracks and the government disarms civilians carrying illegal guns,” he added.

Wildlife Conservation and Tourism Ministry officials say prior to the two-decade civil war between what was previously north and south Sudan, South Sudan had more than 100,000 elephants. But when the war ended in 2005, there were only 5,000 left.

But between January and April WCS officials established that some of the collars were no longer visible on satellite.

“We have evidence that some of the elephants we collared have been killed. When the conflict escalated we established that one of the collars was behind rebel forces’ lines in Jonglei state. That means that elephant has most probably been killed by now,” Michael Lopidia, WCS’s deputy director for South Sudan, told IPS.

The increased availability of arms remains an issue here. Before South Sudan gained independence in 2011, it was estimated that there were between 1.9 and 3.2 million small arms in circulation in the country. Two-thirds of these small arms and light weapons were thought to be in the hands of civilians, according to a February 2012 report by Safer World titled “Civilian disarmament in South Sudan: A legacy of struggle.”

But this number is thought to have doubled or tripled in the last three years due in part to the number of rebel and militia groups that have sprung up in Jonglei and Upper Nile states in 2010 and 2011. There has also been an increased supply of small arms by traders from neighbouring countries.

“There is serious poaching here in South Sudan simply because there are a lot of guns in uncontrolled hands. Civilians who own guns just go into the forests and begin poaching without permission from the ministry,” Omoli explained.

Ethnic conflict has also played a role in hampering conservation efforts. During the 2013 war in Jonglei state’s Pibor County led by David Yau Yau of the Murle community, communities and wildlife rangers from the Boma National Park were displaced. This ultimately lead to a halt in wildlife conservation activities.

“The armed conflict between Yau Yau and the SPLA [South Sudan’s army] from February to May 2013 disrupted our efforts to conserve animals. WCS lost more than 5,000 dollars worth of property. All our infrastructure, including tents, were removed and looted,” Lopidia said.

But another concerning factor is that wildlife rangers lack the capacity to deal with South Sudan’s highly militarised poachers. According to both the South Sudan Wildlife Service and WCS officials, poachers here tend to be heavily armed.

“Once we went to fix a sign post. There were seven rangers and they saw more than 10 poachers carrying G3s [automatic rifles] while the rangers were carrying AK47s [select-fire assault rifles]. We had to come back because if the rangers had approached the poachers they would have been overpowered,” Lopidia explained.

“That’s why we want to speed up the laws so that they are put in place and implemented as soon as possible,” Omoli said.

South Sudan Wildlife Service officers also do not have powers to prosecute. Arrested poachers and wildlife traffickers are often handed over to the police for prosecution.

“The problem is that when these cases are taken to police they are sometimes not tried and the cases just die out. We would prefer to try these cases. But the cases end up pending and the suspects are sometimes released and they go back to what they have been doing — poaching,” Omoli explained.

Officials say that if South Sudan’s variety of wildlife, including elephants, giraffes, buffalos, white-eared-kobs, gazelles, tiang, antelopes, mongalla gazelles, reedbuck and lions, were sustainably managed, tourism for the country’s wildlife could contribute up to 10 percent of South Sudan’s GDP in 10 years time.

“We need proper planning and policies. We should identify what natural resources we have and prepare good policies guiding how they should be used for a long time to benefit the current and future generations. There should be a national plan to do that,” Dr. Leben Nelson Moro, a professor of development studies at Juba University, told IPS.

Ministry of Wildlife Conservation and Tourism officials are working with WCS to develop a legal framework that will govern how wildlife offences or violations are dealt with. The law will also guide the development of tourism.

But there will also have to be an education campaign for local communities as there is currently limited awareness among South Sudan’s communities on the importance of wildlife conservation.

At a local restaurant in Juba, 55-year-old Zachariai Lomude told IPS: “I love bush meat and have eaten it since I was a child. I will continue to eat it as long as I am alive regardless of whether killing wild animals is allowed or not.”