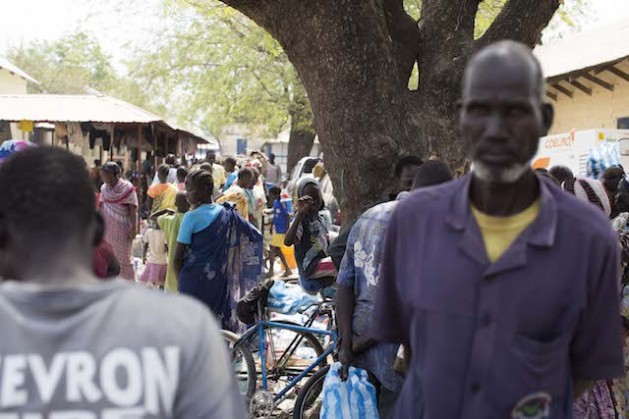 JUBA, Feb 3 2014 (IPS) - South Sudan is taking the first steps in what promises to be a long process of healing the fractures that prompted more than five weeks of fighting, potentially leaving thousands of people dead and wounded and displacing 863,000 others.

But tensions remain high, following reports of continued fighting in some areas of the country and the government’s decision to move forward with treason charges against four remaining political detainees. And the longer the process stretches on, the worse the situation will become for the hundreds of thousands of displaced across the country.

As the numbers of internally displaced continue to grow, the U.N. and humanitarian partners are struggling to provide enough food, clean drinking water and shelter for all of them.

Upper Nile State Information Minister Philip Jiben Ogal told IPS there was gunfire last week outside of Malakal, the state capital. The fighting is in contravention of an almost two-week-old ceasefire agreement between the government and rebels.

Martin Ojok Karial lives in Malakal, working in the Ministry of Finance’s taxation office. Malakal suffered two waves of fighting and was temporarily held by government forces. The town’s central market is destroyed and at least 27,000 people have sought refuge at the United Nations base on the outskirts of town. Karial is one of them.

The humanitarian medical group Doctors Without Borders (MSF) also announced Jan. 31 that ongoing insecurity had forced thousands of people to flee into the bush in Unity State.

Karial sees the fighting as a political feud that was allowed to get out of control.

“A lot of people were dying without any reason,” Karial told IPS. “Because the clashes are between two people. The president of South Sudan and the vice president. This is no reason for people to fight and kill themselves.”

The fighting here first broke out in a Juba military barracks on Dec.15 and spread quickly – first throughout the capital and then across central and eastern South Sudan. President Salva Kiir accused his political rival and former deputy Riek Machar of launching a coup against the government. Machar has repeatedly denied the charges, though he acknowledges he is now in open rebellion against the government.

Following weeks of negotiations in Addis Ababa, the two sides inked a cessation of hostilities agreement Jan. 23. Just hours after signing the document, they began accusing each other of violations.

Karial said people have now lost faith in their political leaders. Even if the two sides strike a peace deal, he said, they would be hard-pressed to convince people like him that it will last.

The government released seven of the 11 political prisoners it had held since mid-December, flying them to Nairobi, Kenya’s capital, late last week. And on Saturday Feb. 2, an advance wave of regional observers arrived to begin monitoring a ceasefire agreement signed between rebels and the government.

While acknowledging there was not enough evidence to charge seven of the detainees, Justice Minister Paulino Wanawilla announced treason charges against the remaining four.

Wanawilla accused them of helping Machar and two others – all of whom are still at large – orchestrate a coup against the government, prompting the outbreak of fighting.

“I think there is enough [of a] case to take them before the court,” Wanawilla said.

Despite the government’s latest refusal to accede to the rebel demand, neither side has backed out of peace talks, which are scheduled to resume this week in Ethiopia.

“The parties are committed and they are ready to resolve the conflict in a peaceful way,” Ethiopian major general Gebreegzabher Mebrahtu said after arriving in Juba. Mebrahtu heads the monitoring efforts organised by the Inter-Governmental Authority on Development, a regional bloc.

It is unclear whether the two sides can strike a bargain that will bring the divided country back together again.

In a pastoral exhortation released late last week, Cardinal Zubeir Wako called for “better governance across the nation and an end to the personalised political power.”

Until people feel safe and they have some control over their political leaders and the events in the country, they will not leave the U.N. bases, the churches and the mosques where they sought shelter from the fighting.

Valerie Amos, U.N. Humanitarian Affairs chief, visited Malakal last week and talked to a handful of the more than 64,000 people displaced in the county.

“Even when I said, ‘We need to work on reconciliation, we need all the communities to come together, the leadership to come together. We need to make sure that people’s safety and security is guaranteed.’ Even then, people were not convinced,” she said. Instead, they asked to be moved to other parts of the country or to leave entirely.

It is a tenuous situation. As the numbers of internally displaced continue to grow, the U.N. and humanitarian partners are struggling to provide enough food, clean drinking water and shelter for all of them. They are also contending with the risk of disease outbreaks.

Aid workers are also starting to draw attention to the long-term implications of the situation.

“We’re coming up to the hunger gap and it is very likely because people have been forced to move as a result of the insecurity, that they won’t have the same food reserves that they had before,” MSF general director Arjan Hehenkamp told IPS.

And as the two sides continue discussions, the situation is only going to get worse.