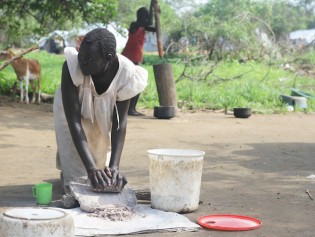 By Andrew Green
Another deadline has passed. But instead of bringing about peace, the leaders of South Sudan’s warring parties have allowed the country to continue its slide toward famine.

By Andrew Green
Three years ago, after Irene Kamyuka finished her sixth year of primary school in Uganda, her father ran short of money. With four siblings ahead of her in school, Kamyuka’s father told her she would have to drop out until his finances turned around.

By Andrew Green
As soon as Sanyu Nagia sits down outside Barbara Namirimu’s home, she asks to see her patient’s bag of medicine. It is too heavy for the ill Namirimu to carry, so her mother, Efrance Namakula, brings it out and hands it over.

By Andrew Green
Before Bor B Primary School built latrines on the school grounds two years ago, students would leave during their first break to head home. Most did not come back until the next morning.

By Andrew Green
Radio Mega FM’s transmission tower rises from the centre of Gulu town, transmitting talk shows and the latest Ugandan radio hits to listeners across the district. But it also serves as something of an informal memorial to community radio-driven peace efforts during the Lord’s Resistance Army’s destruction of northern Uganda.

By Andrew Green
From a distance, Bugala Island in Lake Victoria is a patchwork of green and brown. The pattern is a result of dense forest retreating in the wake of recently planted palm tree plantations.

By Andrew Green
Life in Bwaise – a slum on the outskirts of the capital of Uganda – has never been easy. But increasingly erratic rains over the last three years have brought constant floods to the former swampland. Residents who can afford to are moving out, leaving the poorest – often single mothers and grandmothers – behind.
ADVERTISEMENT ADVERTISEMENT