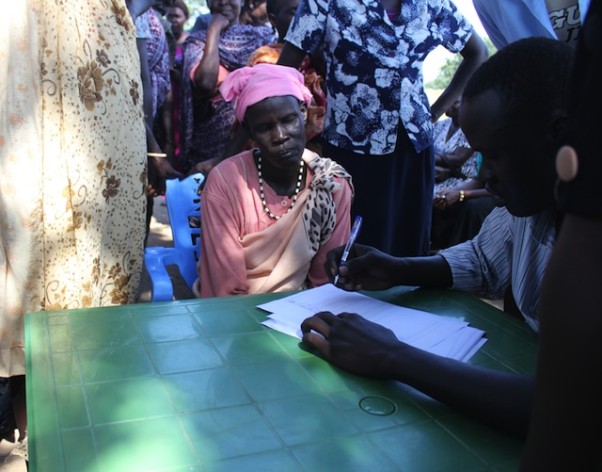 A woman registering to vote at a school in the border town of Abyei on Oct. 20. She was one of more than 100 people living in the town who showed up to register on the first day as people voted whether to join Sudan or South Sudan. Credit: Andrew Green/IPS

ABEYI, Oct 30 2013 (IPS) - When Chris Bak returned two weeks ago to the disputed border town of Abyei, which voted this week on whether to join Sudan or South Sudan, he barely recognised it as the place where he grew up. “Everything is dirty,” he told IPS. “We were just going around and around, but we didn’t [recognise] this place.”

The town lies in the centre of the Abyei region, a 10,000 square kilometre area that straddles the border between Sudan and South Sudan. Both countries lay claim to the area, with its oil reserves and vast tracts of fertile land. A 2005 peace agreement ended the decades-long Sudanese civil war and paved the way for South Sudan’s independence, but failed to resolve Abyei’s fate.

Since he returned, Bak has been camping out in an abandoned classroom, hoping it does not rain because the school has no roof. He is sharing the room with a friend who is showing symptoms of malaria. Bak has been trying to track down a doctor, but after three days of asking around he had still not located anyone.

“There are difficulties that face us,” he said. “We need to bring up Abyei.”

Bak, 25, returned to Abyei after five years away to participate in a referendum initially proposed by the African Union (AU) for this month, which is meant to decide the fate of the contested region.

But Sudan refused to sign on, as the referendum would have excluded members of the pro-Sudan Misseriya community, who visit Abyei seasonally to graze their cows. In the face of Khartoum’s intransigence, the AU did not organise the vote or present a new proposal.

That did not staunch the enthusiasm of the majority Dinka Ngok community who pressed ahead with a unilateral referendum that ended on Tuesday Oct. 29.

An organisation of tribal leaders, calling themselves the Abyei Referendum High Committee, began organising trips last month for people who wanted to take part in the vote. They estimate they have brought 100,000 people back to the area, though it is impossible to verify that number.

They plan to announce the results before the end of the month and it is likely they will vote to join South Sudan.

However, the AU has “strongly condemned” the move, calling it an “illegal action” and warning that it could threaten peace in the region. South Sudan has said it will refuse to acknowledge the results.

Dr. Alfred Lokuji, a professor of peace and rural development at the University of Juba, told IPS that the vote “is not going to accomplish much of anything” as both the AU and Juba have made it clear they will not recognise the outcome.

He does not anticipate any violence to result from the vote. However, he described the unilateral move as “symbolic,” showing the Dinka Ngok community is determined to have the situation resolved.

Sudanese President Omar al-Bashir travelled to Juba last week for a meeting with South Sudan’s President Salva Kiir. At the end of the summit, the two leaders announced plans to move ahead with a joint administration and police force for Abyei, though they failed to set a timeline on when that would happen.

The Dinka Ngok leadership, tired of living in limbo, have rejected the proposal.

In part that is because they no longer have the luxury of waiting for Juba, Khartoum and the international community to reach a permanent solution.

In 2008, fighting broke out in this area between militias supported by the Sudanese government and forces from what was then southern Sudan. Human Rights Watch estimates 60,000 people fled the violence. At the time, Bak and his family fled to Aweil, which is a five-hour drive west of Abyei and is located in South Sudan.

Fighting erupted again in 2011, only weeks before South Sudan officially split from Sudan to become the world’s newest country. The battles left Abyei town in ruins. The ground is dotted with concrete foundations where houses used to stand. A toppled red-and-white cell phone tower rests crookedly on top of trees and buildings.

Having brought thousands of people back to Abyei to see the area’s devastation first-hand, the Dinka Ngok leadership are facing pressure from people like Michael Acuil Deng, an engineer who has been living in Juba, to make something happen now.

“You see around, we have [to do] a lot of planning for our area to be the best,” he told IPS. “Now everything is like the desert. It’s crushed. Now we start from the scratch. We have to build the area.”

Development is difficult in a no man’s land, though.

Deng Agos Lowal stayed in the area despite the fighting. He is a member of the region’s Social Welfare Commission, a locally-appointed body that attempts to provide basic services to people. With no support from either Juba or Khartoum, he said there is little they can do to actually help people, let alone track the fluid population.

A United Nations peacekeeping force is visible here, but Lowal said the region’s uncertain future has kept most humanitarian organisations out. All anyone can do, he said, is wait for the vote to decide Abyei’s fate. When that is resolved the rebuilding of Abyei can begin.

Despite the warnings from Juba and Khartoum, Dinka Ngok leaders are holding out hope that the international community will eventually recognise the outcome of their unilateral referendum.

“We are excited to rebuild, to give our energy for everything,” he told IPS. “We hope all the organisations … are rushing here to give some help to the people here.”