SSESE ISLANDS, Uganda, Dec 6 2011 (IPS) - From a distance, Bugala Island in Lake Victoria is a patchwork of green and brown. The pattern is a result of dense forest retreating in the wake of recently planted palm tree plantations. 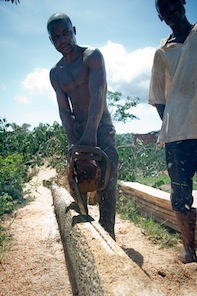 Workers on Bugala Island work to clear the rainforest to make way for an expanding palm tree plantation. Credit: Will Boase/IPS

The island, the largest of Uganda’s Ssese Islands, is at the center of one of the country’s newest economic endeavors – palm oil processing – and the formerly lush rainforest has fallen quickly, taking with it some critical jobs for the island’s poorest women.

Now, five years after the first phase of that process was completed, residents are starting to measure the impact of the initiative. Many speak glowingly of the jobs and activity the plantation has created. But for some of the island’s poorest residents – especially widows and the wives of often-traveling fishermen – continued deforestation has robbed them of their sole source of income.

Sarah Namwanje used to collect timber and charcoal from the forests that she could sell to people around the island. Now the 28-year-old mother of seven has no way to make money.

“No timber is seen,” she said. “We’re searching for firewood and trying to get money, but my job has stopped.”

Ahead of the palm oil project’s start, activists had clashed with the government over the potential environmental ramifications of the deforestation. But, with assurances from Bidco –the company behind Uganda’s palm oil industry – that the development would have little environmental impact and a stamp of approval from the National Environment Management Authority (NEMA), the dazzle of a new industry and more jobs eventually won out.

What was never communicated to some of the poorest residents was how the project would affect both their livelihoods and their health. Especially the small groups of women who live on an island mostly populated by fishermen.

Some are widows, their husbands lost to AIDS or fishing accidents. Others are left alone for long stretches of time, their husbands chasing schools of fish around the archipelago of 84 islands. Until the men return with money from their catch, the women must scramble for resources.

The available jobs for these women are scarce and Mary Nampomwa, a local health worker, said it is difficult for many of them to get by without resorting to commercial sex work.

Before the palm plantations arrived, women who refused to turn to sex work had small-scale jobs, like gathering firewood. They had relatively free access to the timber in national forests or on privately held, underdeveloped plots, according to Richard Kimbowa, the programme manager for Uganda Coalition for Sustainable Development (UCSD). 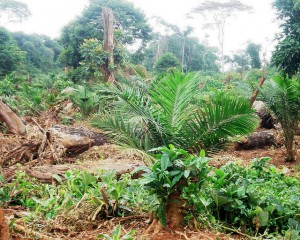 For many women on Uganda’s Bugala Island, deforestation has robbed them of their livelihoods. Credit: Wambi Michael/IPS

But many of those landowners, offered an opportunity to make good money off of unused land, sold out or cleared the forest themselves to create subsidiary palm plantations.

Now the island’s poor women are “being marginalised,” Kimbowa said, in the “craze for expanding this palm.”

Namwanje said the only thing she knows to do is encourage people to start planting more trees, so that she has renewed access to firewood and charcoal. But that is not going to happen anytime soon. Other women have taken up jobs drying small mukene fish on the sand next to Lake Victoria.

What is particularly galling to Edisa Katusime, a single mother of six children, is that local officials had for years been warning residents about cutting down trees. She was told that the forest was critical for preserving the island’s animal life and she had to be secretive about gathering timber.

Kimbowa predicts that the small-scale job loss might be only the first of the problems the palm plantations are going to create. Eventually, he said, there are going to be issues with food security as land previously used for raising crops turns to palm trees. And already some of the women are reporting that the absence of forest covering is creating health issues.

The loss of the forest means there is no longer a shield from the strong winds that sometimes blow across Bugala Island. The wind now “sounds as if it’s going to knock the house down,” Katusime said. The dust it carries sometimes leaves her children in coughing fits and has been particularly dangerous for asthmatic residents.

And despite assurances from Bidco that it is following the plan laid out by NEMA to minimise environmental impact, UCSD is still monitoring the situation, concerned about issues like soil erosion and seepage of agrochemicals into Lake Victoria. Despite the jobs that Bidco has brought, most of the people on Bugala still live and die by fishing. If fish stocks are reduced, there will suddenly be a lot more people on the island without a source of income.

For now, the warnings of environmental groups and the complaints of women like Katusime and Namwanje are muted by widespread enthusiasm for the island’s palm oil industry. And it’s still growing. According to Bidco, the palm oil plantation will eventually cover 40,000 hectares and be the largest plantation in Africa.

There is division even within the small group of women infected with or affected by HIV/AIDS that Katusime and Namwanje belong to. Unlike those two women, Annette Nnamukasa was able to harness enough money to take advantage of the palm oil boom. She bought about two acres of land and had it cleared. In its place she planted palm trees and now sells the crop to Bidco.

“It is almost the same,” she said. “The palm trees are almost forests.”