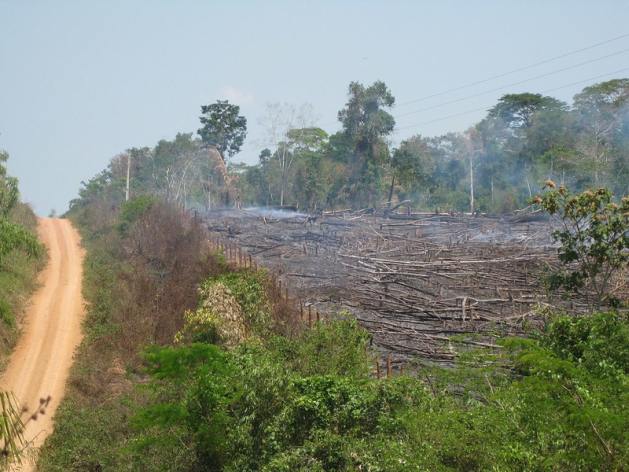 DURBAN, South Africa, Nov 30 2011 (IPS) - Global climate change can now be observed from space. The United Nations Food and Agriculture Organisation (FAO) launched a new technology that can survey the world’s forests via satellites and provide a more accurate, global picture of common threats to the environment, such as deforestation, degradation or illegal logging.

Using a remote sensing surveying technology, FAO has taken and analysed more than 13,500 high-resolution satellite images in 102 countries. These images will help nations to accurately assess the state of their forests. Monitoring change in forests has important implications for biodiversity conservation, carbon storage and human livelihoods.

The losses in forests all around the world can now be quantified for the first time, FAO announced at the U.N. 17th Conference of the Parties climate change summit, which is taking place from Nov. 28 to Dec. 9 in Durban, South Africa.

The rate of forest loss has increased from four million hectares in 1990s to six million hectares between 2000 and 2005 - We are losing vital carbon storage, biodiversity and other values forests provide
Adam Gerrand, FAO forest monitoring scientist

“It’s a very comprehensive study of the world’s forests. For the first time we have consistent and comparable global and regional long-term data on forest loss land use. Up until now, most available data has come in numbers, not maps (based on satellite images),” explained FAO forest monitoring scientist Adam Gerrand.

As a result, very few countries have been able to monitor the impact of climate change and human intervention on their forests consistently over time.

“We have been lacking good data on deforestation and urgently needed more details about the dynamics of forest loss. We didn’t get the whole story until now,” Gerrand added.

The initial findings from the high-resolution satellite data show that the world’s total forest area shrank by an average of 14.5 million hectares per year between 1990 and 2005. It largely occurred in the tropics, likely attributable to the conversion of tropical forests to agricultural land.

“The rate of forest loss has increased from four million hectares in 1990s to six million hectares between 2000 and 2005,” said Gerrand. “We are losing vital carbon storage, biodiversity and other values forests provide.”

There is some good news, too, however. The survey shows that deforestation does not happen quite as fast as countries have been reporting. The new data showed a net loss of 73 million hectares between 1990 and 2005 compared to previous net loss estimate of 107 million hectares for the same time period.

During that time, the loss of forests was highest in the tropics, where just under half of the world’s forests are located, followed by Africa. Asia was the only region to show net gains in forest land-use area in both periods. Deforestation occurred here as well, but the extensive planting that has been reported by several countries in Asia, mainly China, exceeded the forest areas that were lost.

All satellite images are taken a hundred kilometres apart and comprise 10 square kilometres. They are classified, labelled and then passed on to the countries where they have been taken, so that governments can review and confirm the data.

“It’s a framework countries can use to improve forest resources,” explained Gerrand.

Some countries have already benefited from the new satellite technology. In Papua New Guinea, a small country in Oceania, for example, which is to 65 percent covered with forests, 41 satellite images were taken to establish the impact climate change had on its forest cover.

“Our country didn’t have the technology to assess forest degradation. The new satellite imagery improves the credibility of data,” said Dr. Joe Pokana, head of Papua New Guinea’s national climate change office. “We now plan to establish a robust national monitoring system that will help us to understand the level of degradation and inform policy.”

Similarly, Angola has started to survey the threat of deforestation via the photographic maps provided by the satellites. Forests currently make up 43.4 percent of the southern African country.

“We how have important information about how our forest resources are utilised, carbon stocks, environmental problems, causes of degradation and deforestation,” said Mateus Andre, the head of Angola’s forestry department. “For the first time, we have quality information on which we can base decisions.”

The new data are particularly important for developing regions like Africa, where existing information is often out-dated or of low quality due to lack of capacity. They differ from previous FAO findings in the Global Forest Resources Assessment of 2010, which were based on a compilation of country reports that used a wide variety of sources.

“Deforestation is depriving millions of people of forest goods and services that are crucial to rural livelihoods, economic well-being and environmental health,” said Eduardo Rojas-Briales, FAO assistant director-general for forestry. “The new, satellite-based figures give us a more consistent global picture. Together with the broad range of information supplied by the country reports, they offer decision- makers at every level more accurate information.”

Further remote sensing studies are expected to reveal changes occurring since 2005. “Eventually we will be able to assign biomass to each site for the estimation of forest carbon emissions,” explained Frederic Achard, a scientist from the Joint Research Centre of the European Commission who helped to develop the new imaging system.

Until then lies a long way ahead. Currently, the satellite technology can provide some important data, but not all. Admitted Gerrand: “We still have several decades worth of development ahead.” (ENDS/AF/WD/DV/EN/SC/AB/DS/IJ/SU/KP/KP/PF/2011)