KENYA: Like a Fish Belongs to Water, the Ogiek Belong to the Mau Forest

NAIROBI, Nov 25 2011 (IPS) - The resettlement of evictees from Kenya’s Mau Forest remains a humanitarian and environmental concern for the country as more than 25,000 people continue to live in camps around the forest. 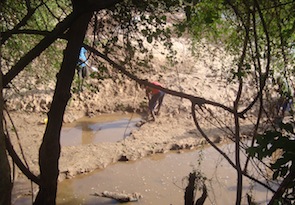 “Indeed the communities around the Mau Forest, such as the Ogiek, Kipsigis and the Maasai, acknowledge the need to save the Mau, but the survival of the environment should be harmonised with the survival of the community,” says Lucy Sadera, who belongs to the Ogiek ethnic group and is a member of Maendeleo ya Wanawake Organisation – the country’s largest women’s movement for development.

The Mau Forest complex in Kenya’s Rift Valley Province is home to the indigenous Ogiek, and settler communities like the Kipsigis and Maasai.

The arrival of non-indigenous inhabitants to the Mau Forest began when former President Daniel arap Moi (1978-2002) encouraged the deforestation of the Mau in order to provide a place to resettle victims of the 1990s land clashes.

However, communities in the Mau Forest, the largest in the country stretching across 400,000 hectares, were forcefully evicted by the government in 2009 in order to stop the massive deforestation occurring here. For the last two years they have been living on the outskirts of the forest in tents with a lack of basic services, like sanitation.

The Mau is the country’s largest carbon reservoir and largest water tower. The forest is also responsible for flood mitigation and water storage, and reduces soil erosion.

The United Nations Environment Programme has blamed frequent drought and flooding in East Africa on deforestation. In the case of the Mau, the water supply from the forest to urban and rural areas has been affected by deforestation.

The government recovered an estimated 20,000 hectares of land through the evictions but the forced removals have been a bitter pill for some to swallow, particularly for the Ogiek community.

“We have known no other home, just like the fish belongs to one habitat and can only survive underwater, so are the Ogiek with the forest,” says Eliud Bonosos, one of only an estimated 20,000 Ogiek people.

It has been especially hard to live with the eviction since government officials and prominent Kenyans allegedly “own” large chunks of land in the Mau Forest complex and have been accused of perpetuating deforestation.

Although the Mau Forest complex, the country’s largest closed-canopy forest eco-system, is public property, prominent people were given huge pieces of land as a reward for their loyalty to the former regime. However, they do not have title deeds to the land, as it cannot be legally sold. But it is not yet clear what action, if any, is to be taken against them.

Although a list was publicly released in 2010 naming those who allegedly “owned” land in the Mau, many on the list dismissed it as a witch-hunt and a backlash to their rejection of the proposed constitution, which was promulgated around that time.

“The Ogiek are bitter because we continue to be harassed by the government even though the government is aware that the culprits of the massive destruction of the forest are actually prominent political figures. The Mau is our ancestral land, why is it that it’s only in the last decade that destruction of the forest has begun? We know how to co-exist with nature and we are not responsible for this ruin,” Bonosos says.

He adds that some of the people who “own” land in the Mau have used the forest’s resources for personal gain. Some have logged trees, while others have turned huge pieces of land into farming areas.

“The Mau Forest’s significance to the community as well as to the country at large is not in dispute, but this forest has been headed for utter destruction from years of encroachment and the consequent logging,” explains Kantau Nkuruna of the Community Forest Association. The association, an initiative led by the Ogiek and other communities living near the Mau, aims to help locals benefit from the forest while protecting it.

Nkuruna adds: “Over the last two decades the Mau has lost about 25 percent of its forest cover, which translates to about 107,000 hectares, due to illegal settlements, logging and charcoal burning.”

“The Mau attracts rainfall and is also a major water reservoir, and as a community we have seen the impact its destruction has had on rainfall in this region,” says Nkuruna. He adds that since conservation efforts began last year, rainfall in the region has improved.

The Mau Forest conserves excess rainwater, and forms the upper catchments of all the main rivers in Kenya’s western region. These rivers in turn are the lifeline of major lakes such as Lake Naivasha in Kenya, Lake Victoria in Tanzania and Uganda, Lake Turkana in Kenya and Ethiopia, and Lake Natron in Tanzania and Kenya.

Destruction of the forest would reverberate beyond the country’s borders. However, in an attempt by the government to save the Mau, the Kenya Forest Service has recently provided rangers to patrol the forest and protect it from further deforestation.

The question of saving the Mau Forest and resettling its evictees continues to be an extremely emotive issue because politicians from the region claim the eviction of the Mau communities was a move by the government to punish the Rift Valley people for their political leanings.

In the 2007 general election people in the region voted for the opposition Orange Democratic Movement. This region is significant politically because people here constitute a large voting block, which has the ability to sway an election.

However, the government continues to try to find a home for the evictees. Minister for Lands James Orengo has admitted that “mistakes were made in the Mau eviction process, but that can be corrected. The task is now to find a community that is not hostile to the evictees.”

However, in the past the government has cited a lack of funds as a reason for not being able to purchase communal land where the evictees can settle.

It is a situation that may change as the government treasury has allocated an estimated 120 million dollars for the resettlement of the Ogiek as well as those displaced by the country’s post election violence in 2007/2008.

The rehabilitation of the Mau Forest and the survival of the indigenous communities will require a balance between preserving the environment and the protection of its inhabitants. So far, this has remained elusive.