NAIROBI, Sep 23 2009 (IPS) - The outlook for food security in East Africa is looking bleak this year following poor rains, underscoring the urgency of raising farm productivity while adapting to a changing climate in Africa. Agroforestry experts have put forward planting trees as a possible solution. 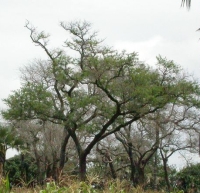 Faidherbia albida in a maize field in Burkina faso: this tree's leaves provide fertiliser for crops growing around it. Credit: Marco Schmidt/Wikicommons

Twenty million people are already dependent on food aid in East Africa, and the FAO fears they will soon be joined by many more.

Harvests have been as much as 50 percent below average in some parts of the Horn of Africa region; the price of maize in Uganda and Kenya has doubled in the past 24 months. The FAO’s Food Security and Nutrition Analysis Unit in Somalia says it fears the country will see its worst humanitarian crisis in 18 years, with 3.6 million people in need of food aid.

The impact of poor rains has been made worse by conflict and displacement in the region. Worse may lie ahead due to the periodic warming of Pacific Ocean currents and related weather changes known as El Niño.

A report released on Sep 21 by the FAO’s Global Information and Early Warning Service predicts further woe for farmers: “The effects of El Niño, which usually brings heavy rains towards the end of the year, could make matters worse, resulting in floods and mudslides, destroying crops both in the field and in stores, increasing livestock losses and damaging infrastructure and housing.”

In August, scientists gathered in Nairobi for the Second World Agroforestry Congress proposed the planting of trees as a lasting solution to food insecurity.

The innocuous poster sapling in a charm offensive to proper agroforestry to the forefront of poverty alleviation is the Faidherbia albida.

“Faidherbia albida is an excellent nitrogen fixer and source of fodder. It sheds leaves during the rainy season and retains them in the dry season, so that it does not compete with crops for light,” nobel laureate Wangari Mathaai of the Green Belt Movement told the congress.

“Agroforestry scientists have been observing for many years the efforts of African farmers to create their own evergreen agriculture, using the biological resources that they already have,” Dennis Garrity, director general of the Nairobi-based World Agroforestry Centre.

And now they can, Garrity argued. “Projects in Niger, where the government put policies in place to stimulate planting of trees have been hugely successful. Some five million farmers in the Sahel are sowing their crops under Faidherbia. In Malawi half a million farmers use the tree to augment their harvests.”

According to Peter Minang, global coordinator of the Alternatives to Slash and Burn Partnership Faidherbia supplies 300 kilogrammes of natural fertilizer per hectare in the form of its leaves that enrich the area around it. “Intercropping with Faidherbia trees can yield a maize harvest of 4 tonnes per hectare, up from 1.3 tonnes.”

Planting Faidherbia and other trees can provide farmers with alternative incomes from timber, charcoal, fruits, nuts or cash crops such as cocoa, coffee, tea or rubber.

And then there is the biofuel industry. Garrity: “Biofuels from ligno-cellulosic woody sources, are a far more efficient means of producing biofuels for transport. In the U.S. alone, fuel from woody sources is now estimated to be capable of producing 50 percent of the fuel needs of the entire transport sector – compared to a potential of only 3 percent for maize-based ethanol.”

Few people dispute that increased agricultural output is needed, but there is sceptism over the potential of agroforestry to live up to the claims made for it.

“We have experimented with Faidherbia albida in Malawi since 1989. It was not a great success,” said Stephen Carr, retired principal agriculturalist for the World Bank in sub-saharan Africa.

“Directly under the tree the yields will go up, but this effect diminishes when you get further away. A realistic increase per hectare with Faidherbia is from 1 to 1.5 tonnes of maize, not 4 tonnes.”

And there are practical drawbacks. Carr: “The tree needs about 25 years to be fully effective, so you plant for your children. Planting happens at the peak of the agricultural season and also prevents the farmer from intercropping with other cash crops. These are huge sacrifices to make.

“Agroforestry also requires intensive agricultural extension services, while in Malawi presently we have one extension worker per 3000 families,” he explained.

Carr also feared that agroforestry can not spread fast enough to keep up with Africa’s population growth. “Of Malawi’s three million agricultural hectares, we have perhaps planted trees on 2,100 hectares. It might help in the long run, but we need to feed our people now.”