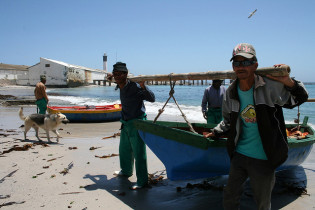 By Servaas van den Bosch
Over 100 years after the attempted extermination of Namibia’s indigenous men, women and children, 20 of the 300 skulls that had been stolen for racial research have finally returned home from Germany.

By Servaas van den Bosch
Botswana and Namibia are set to lose preferential access to the European Union, which wants African, Caribbean and Pacific countries to sign controversial free trade agreements within two years or face potential loss of market access to the 27-member EU bloc.

By Servaas van den Bosch
Climate change is increasingly playing a role in North-South trade, as carbon emissions are being used as an excuse to protect markets, with poorer countries likely to lose out.

By Servaas van den Bosch
European Trade Commissioner Karel de Gucht made a pit-stop in Windhoek to appease concerns over a troublesome economic partnership agreement (EPA) ahead of the Africa-European Union summit in South Africa.

By Servaas van den Bosch
While globally trade agreements are more and more about linking production chains between countries and continents, Africa remains locked in a struggle to overcome the colonial legacy of fragmentation, trade experts say.

By Servaas van den Bosch
It is not certain that an African free trade area will further regional integration or deepen the existing inequality between countries.

By Servaas van den Bosch
A successful entrepreneurial programme in the north of Namibia that infuses farming practices with gender-responsive environmentalism may serve as a model for other countries on the African continent.

TRADE: Brazil and Africa Ready to Do the Samba

By Servaas van den Bosch
African trade with India and China flourished over the past decade but, with unemployment rising and industrialisation failing to take hold, cracks are appearing in Africa’s much-vaunted "Look East" doctrine. Meanwhile, from across the Atlantic, Brazil is making inroads into the continent.

By Servaas van den Bosch
A radical rethink of current energy policy can cut South Africa's greenhouse gas emissions by 80 percent in 2050 compared to 1990 levels. More than that - after an initial spike in investment - South Africans four decades down the line would pay 23 billion dollars per year less for their electricity compared to business as usual.

By Servaas van den Bosch
Inaction marked the Extraordinary Summit of Southern African Development Community heads of state in Windhoek this weekend, despite an agenda covering Zimbabwe elections, political deadlock in Madagascar, the suspension of the regional court and allegations of corruption within SADC itself.

By Servaas van den Bosch
The Southern African Development Community (SADC) faces several awkward problems at the Extraordinary Summit of Heads of State scheduled for May 20-21.

By Servaas van den Bosch
A new film explores the real complexities of relationships for young people in Namibia, and the effects of gender inequality and culture on the choices people make about their sexual lives.

By Servaas van den Bosch
With regional wheels rolling to put in place the envisaged grand tripartite free trade area (FTA), questions have arisen about whether it would be viable and increase competitiveness.

By Servaas van den Bosch
A new revenue sharing formula in the Southern African Customs Union (SACU) could boost development but has met with resistance from the governments of poorer states in the sub-region that are interested in "just getting the money".

Heaviest Ever Floods in Northern Namibia

By Servaas van den Bosch
North-central Namibia is experiencing the heaviest floods ever recorded, but unlike in previous years, the area is fully prepared.

Questions Abound Over Whether IBSA and BRICS Can be Complementary

By Servaas van den Bosch
The IBSA Dialogue Forum, a South-South alliance of India, Brazil and South Africa, could be better suited to the needs of Southern Africa for South-South cooperation than the BRICS (Brazil-Russia-India-China-South Africa) loose alliance of emerging economies. But Southern Africa will have to beef up its markets to truly benefit.
Next Page »
ADVERTISEMENT ADVERTISEMENT