WINDHOEK, Sep 15 2011 (IPS) - European Trade Commissioner Karel de Gucht made a pit-stop in Windhoek to appease concerns over a troublesome economic partnership agreement (EPA) ahead of the Africa-European Union summit in South Africa. 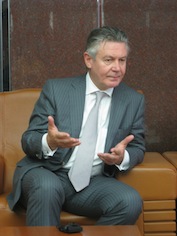 While the EPAs are not likely to focus dominantly on the agenda of the Africa-EU summit on Thursday in South Africa, De Gucht used his visit to the region to make a courtesy call to Namibian President Hifikepunye Pohamba in order to break a deadlock over the EPAs between the EU and the small southwestern African state.

Namibia, with exports to the EU totaling 1.16 billion euros (2.2 billion dollars), is an insignificant player in trade between the European bloc and the rest of the world. However, for years the country has refused to accede to a trade agreement with the Europeans arguing that an EPA would erode its economic policy and would give the EU an unfair advantage in trade.

The EPAs were necessitated by a World Trade Organization (WTO) ruling that decreed preferential trade agreements between the EU and the 78 poor countries in the African, Caribbean and Pacific group should be reciprocal. This means these countries have to open their markets to the EU in return for preferential market access to Europe, though the liberalisation does not have to be equal.

The negotiations have stretched out for almost a decade and have been extremely troublesome as countries like Namibia hold out for a better deal. While a challenge at the WTO for non-compliance is unlikely at this point, Europe is keen to close the deal. The scramble for resources in Africa has intensified with China and India being the EU’s main competitors.

“We have taken stock of the EPA negotiations and cleared up some important misunderstandings that could have been a hindrance to signing,” De Gucht said late on Tuesday after meeting with Pohamba.

He said the concerns that countries in the (Southern African Development Community) SADC-EPA negotiating configuration share will be discussed openly in the negotiations for a full EPA.

In July 2009 the EU signed an interim EPA (IEPA) with Botswana, Mozambique, Lesotho and Swaziland, while Namibia and South Africa refused to sign and Angola is mainly an observer in the talks. The IEPA threatened to cause a schism in the Southern African Customs Union (SACU) until the EU agreed to move the talks up to an all-inclusive agreement for the region.

In this spirit, De Gucht reiterated Europe would push back negotiations on new generation issues. “We will not force countries to negotiate on services or competition issues, such as Intellectual Property Rights (IPRs),” he said.

On the touchy subject of geographic indicators, De Gucht announced that these “will be discussed together.” Geographic indicators restrict countries exporting products linked to a certain geographical area in the EU. For instance, the brand name Champagne can only be used for sparkling wine that comes from the Champagne region in France.

The issue is mainly of concern to South Africa, which wants to increase market access for its agricultural products above and beyond the existing preferential Trade and Cooperation Development Agreement (TDCA) it has with the EU.

De Gucht was confident that outstanding issues, such as preferential access for Namibia’s fisheries products that are sourced beyond the internationally accepted 12 nautical mile territorial zone and the ambivalent status of its canning industry, could be solved. The same would apply for other remaining tariff issues.

“We want to conclude these talks. We want to sign,” said Namibia’s Minister of Fisheries Bernhardt Esau. “There is an understanding that we can resolve the remaining issues as soon as possible.”

De Gucht denied that a renegotiation of the EU’s Generalised System of Preferences (GSP) would put pressure on the talks. If Namibia does not sign the EPA it will fall back on the GSP. However, the new GSP, which will come into effect in 2013, would likely exclude middle-income countries like Namibia.

“The GSP does not make much sense for countries like Namibia as it only allows preferential access for 65 percent of products. Under the current Duty Free and Quota Free (DFQF) regime, as well as under the EPA, Namibia would have much broader access,” De Gucht said.

Currently the EU is Namibia’s biggest trade partner outside the region and it is unlikely the large emerging economies will give the region the same favourable terms that Europe does.

However, it is unlikely Namibia will sign the EPA unless its main trade partner, South Africa, accedes to an EPA.

If South Africa signs the EPA it will be under stricter conditions compared to what the EU can offer the smaller peripheral states. But concerns remain. South Africa has little to lose and can opt to continue trading under the TDCA.

If Namibia continues to refuse to sign an EPA and loses market access under the GSP, it would have to trade with the EU under general WTO rules. However, the EU, through the SACU customs area, would have access to Namibian markets under the TDCA, said independent Namibian trade expert Wallie Roux.

“In terms of international trade, this does not make sense at all. It would be the EU versus Namibia. The net result would thus be to succumb to a signature of an un-concluded EPA in order to have some agreement with the EU, while in the meantime being subjected to EU preferential access to our own domestic market,” Roux said.