WINDHOEK, Sep 1 2011 (IPS) - It is not certain that an African free trade area will further regional integration or deepen the existing inequality between countries. 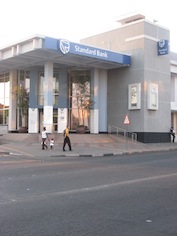 For the past year and a half the African tripartite free trade area (FTA) has dominated the economic agenda in South and East Africa.

The tripartite area, which will connect the Regional Economic Communities (RECs) of the Southern African Development Community (SADC), the Common Market for Eastern and Southern Africa (COMESA) and the East African Community (EAC), will span 26 African countries with over 578 million consumers and a combined gross domestic product of 853 billion dollars.

Negotiations were launched this year in June in South Africa and leaders want the first phase of the Cape to Cairo free market to be a reality within 36 months. This phase deals with trade in goods and focuses on tariff liberalisation, infrastructure development, non-tariff barriers, movement of business people and rules of origin.

“The timeline is probably a bit unrealistic, seeing that the negotiating mandate is driven by member states of the different RECs,” says Ndiitah Robiati from the Agricultural Trade Forum in Windhoek. She refers to the slow progress made on economic integration in SADC and COMESA, where member states have not implemented agreements on tariff liberalisation.

Officially the tripartite FTA is the panacea for overlapping membership of different RECs and an important step in the implementation of the 1991 Abuja Treaty that calls for an African Monetary Union by 2023. But a single currency bloc, or even a customs union, could be the last thing on the mind of South Africa, which is dead set on making the tripartite FTA a reality.

“South Africa has the industrial base, but they face the problem of getting their goods and people into the continent, especially into the large markets of East Africa, where its footprint is limited,” comments Paul Kruger, researcher at the Trade Law Centre of Southern Africa (TRALAC).

Economists point out that big countries like South Africa and Egypt stand to benefit most from the tripartite FTA. “In the short term the bulk of the countries will not benefit in terms of increased trade between member states, our research has shown. The dominant role players will benefit because they are better positioned,” says TRALAC researcher Taku Fundira.

“In Southern Africa only South Africa and Mozambique will benefit. In the case of South Africa, this is because of the advanced state of its economy and its existing industrial base, which gives it an edge over other countries. Mozambique is still growing and is putting the right policies in place to attract investments. Both countries will benefit from liberalisation in the agricultural sectors as they are large sugar producers.”

But trade experts warn that the cumbersome economic integration process in SADC, with an envisaged customs union being pushed back and countries failing to implement the provisions of a 2008 FTA, raises doubts about the tripartite area.

“No doubt there are challenges,” says Fundira. “The smaller problems manifesting themselves in the RECs could be multiplied in the tripartite FTA. But states have also learned from experience. Rules of origin, for instance, should not be an obstacle but a facilitator of trade.”

Rules of origin are a way to protect products and industry sectors. Countries use them to exclude third parties from preferential trade agreements. An example would be preventing a Chinese product, repackaged in South Africa, finding its way into the European Union (EU) under South Africa and the EU’s Trade and Development Cooperation agreement (TDCA).

Similarly countries listing products as sensitive should not hinder the process, says Fundira. “The definition of ‘sensitive’ currently is quite broad. As most countries in the region produce the same things, listing a few tariff lines as sensitive immediately restricts trade. Then the process becomes meaningless. We can see that this issue is approached more cautiously in the FTA negotiations.”

It is still unclear how the ambitions of the tripartite FTA will be reconciled with those of the RECs. EAC and COMESA are customs unions, while SADC announced two weeks ago it still intends to establish a customs and monetary union.

This might be fine with South Africa, which already has a headache from its membership of the Southern African Customs Union (SACU). Through the SACU South Africa pays revenue to the union’s four other members. It is money that disappears in the budgets of these countries, instead on being spent on infrastructural development that would enable South Africa to widen its markets.

“South Africa is shifting its efforts from deeper economic integration to liberalising markets. Technically speaking it probably could do without entities like SACU,” notes Robiati.

What some commentators describe as a new South African imperialism, others deem a more realistic alternative to the haughty ideals of economic unity so far pursued.

“South Africa has not allowed itself to be held back by trade barriers. When you are in Dar es Salaam you can eat in the same Spur restaurant as you would in Johannesburg,” says Robiati. “You can phone with MTN and take your money out of a Standard Bank ATM. South African companies have taken the risks and it has paid off.”

In short, South Africa has an economic vision. “Outside South Africa there are no industrial policies in place. How can countries sign up to trade agreements when they essentially do not know what they want?” Robiati asks.