WINDHOEK, May 31 2011 (IPS) - A radical rethink of current energy policy can cut South Africa’s greenhouse gas emissions by 80 percent in 2050 compared to 1990 levels. More than that – after an initial spike in investment – South Africans four decades down the line would pay 23 billion dollars per year less for their electricity compared to business as usual. 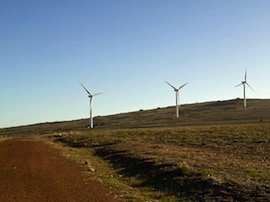 Reducing South Africa’s present reliance on coal and oil at the same time as focusing on energy efficiency could see the country use less energy in 2050 than it does now, even as population and the economy grow.

This scenario is presented in a report titled “The Advanced Energy [R]evolution: a Sustainable Energy Outlook for South Africa”, presented on May 25 in Johannesburg by the European Renewable Energy Council (EREC) and Greenpeace.

A sustainable energy future for Africa   Sven Teske, Greenpeace’s global director for renewable energy, foresees a bottom-up electrification of rural Africa, where many people still live disconnected from a national grid. “Areas close to the grid will be serviced a combination of concentrated solar power, wind power, bioenergy and geothermal energy sources, as well as medium and small hydropower schemes.”

More outlying areas would be powered by a combination of solar photovoltaic cells and electricity generated by biomass, backed up by small hydro schemes. Local cooperatives could work together to establish and distribute electricity, electrifying large areas by connecting such mini-grids.

Around the world, renewable energy contributes on average 13 percent to power generation; Africa lags behind with less than 11 percent of its energy coming from renewable sources.

And Sven Teske, one of the lead authors of the Intergovernmental Panel on Climate Change's "Special Report on Renewable Energy Sources", cautions that "renewables" in Africa mostly refers to unsustainable biomass - firewood and charcoal, produced and consumed using inefficient and rudimentary techniques.

The gap could grow still wider. "While in Europe over 60 percent of new generation is from renewable sources, and only eight percent by coal, Africa has hardly any investment in renewables," he says.

"We hope this report helps build a long-term political framework for investment in renewables - mostly wind and solar power - and in achieving energy efficiency," says Teske.


“A bottom-up electrification would be much more likely than a top-down approach, for which there is also no economic incentive,” adds Teske. “What operator wants to pull an expensive power line to a small community? The bottom-up approach is working in countries like India where the government has committed to generating 20,000 megawatts in local schemes.”

The report also presents a less ambitious scenario where fossil fuels still make up a sizeable portion of the energy mix, but the region could still cut its emissions in half by using energy more efficiently.

A vital component will be legislated standards for efficiency, says Teske: “We have unfortunately seen that campaigns to change behavior have little effect. The problem in South Africa and the region is that there are no technical efficiency standards for buildings, appliances, power plants and vehicles.”

For example, there is no regulation that says standard standby power consumption of a household appliance should not exceed one watt.

Putting it into practice

In the Namib desert, 150 kilometres from the nearest town, a small community already practices to a large extent what the researchers are preaching. “We use about four kw/h of electricity a day, for groups of 40 learners and an average of 15 litres of water per person per day,” says Viktoria Keding, director of the Namib Desert Environmental Education Trust (NADEET). In comparison, South African households consume 35 kw/h a day, while on average, each South African goes through 50 litres of water.

The centre, established in 2003, is powered entirely by solar and wind energy, including its fridges, freezers and overhead projector. A small petrol generator runs as a back-up a few hours a month. “What we use in water and electricity in a day, others use in a few hours,” says Keding. And if NADEET cooked on an electric stove instead of using solar cookers, its carbon footprint would jump 23-fold she adds.

Keding says most people lack the motivation to accept the principle of using less energy. “Yet a lot of these things are easy and just amount to sustainable living. You have to be of the mindset that resources are valuable. If water is gold to you will buy a low-use shower head. Apart from education, technology is the main problem. A lot of people want to make these changes, but they just don’t have access to the technology.”

Teske says it is a myth that wind and solar energy are more expensive then fossil fuel sources. “Renewables have gained a reputation as expensive in the past two decades, but this is no longer true. Solar costs for instance have gone down by over 50 percent in the last four years. This drop will continue. Similarly wind power is cheaper than new coal power plants.”

According to the report, current problems around transmission can be overcome by using decentralised grids and more efficient power stations.

Africa, says Teske, is in the fortunate position that it can adopt the latest technology without having had to make the enormous costs of its development. “Africa can leapfrog into new technology, it doesn’t have to repeat the same investments pioneers like Germany, Denmark and Spain made.”   According to the EREC/Greenpeace report, an aggressive renewable energy policy, shifting 80 percent of investments to renewables, would require a 404 billion dollar investment. For South Africa alone, would require an additional 5.2 billion dollars of spending each year; but the projected savings would amount to 6.6 billion dollars.

But investors need security and economies of scale. “A wind park of several thousand megawatts is a good business case,” argues Teske.

“But long-term policies are needed to build up such a local renewable energy sector. The reason that there is hardly any investment in renewable in Africa is not the lack of high feed-in tariffs for renewables, but the lack of a clear policy framework. Investors want to know if they will have access to the electricity grid? Do they have long-term access to the market? Can they close solid power-purchase agreements with operators?”

“It is not the availability of the resource, but the public policies that will either expand or constrain renewable energy development over the coming decades,” said Ramon Pichs, another of the IPCC report’s authors.

“Developing countries have an important stake in this future – this is where most of the 1.4 billion people without access to electricity live, yet also where some of the best conditions exist for renewable energy deployment.”