WINDHOEK, Oct 5 2011 (IPS) - Over 100 years after the attempted extermination of Namibia’s indigenous men, women and children, 20 of the 300 skulls that had been stolen for racial research have finally returned home from Germany. 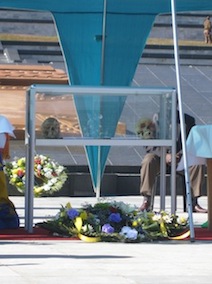 In a glass case two exhibited skulls are a morbid reminder of the horror of a century ago. Credit: Servaas van den Bosch/IPS

“Because of that war we have lost our voice as a people. When the election time comes the Hereros are no longer enough to make a difference. That is what they have done,” says Florah Kaapaa Katjivikua, a young woman in her twenties.

Dressed in traditional wear, with the typical headgear that resembles the horns of cows, which are so important to the Herero people, a Namibian ethnic group, she paces the tarmac of Hosea Kutako International Airport in Windhoek.

A few hundred metres from her, the remains of her ancestors are offloaded from an Airbus A340-300. It is Tuesday morning. Behind her, over 4,000 Herero and Nama people chant war songs, dance, or just wait patiently. Men dressed in military uniform carry banners demanding reparations.

Women shield their eyes against the rising sun, most of them have been here since 2am. When the boxes holding the skulls are removed from the aircraft, suddenly thousands storm the plane to pay their respects.

Although this South Western African country has been independent for 21 years, for many the return of the skulls of their ancestors from their colonial occupiers was the day the country finally closed the colonial chapter of its history.

The Herero that survived the military campaign were driven into the ‘Omaheke’, a large desert area bordering Botswana were many died of thirst. They were shot on sight or rounded up in concentration camps with mortality rates of well over 50 percent.

The Nama people, an ethnic group hailing from Namibia’s arid south, faced a similar fate after they too revolted. Bodies of some of the victims were beheaded and the skulls sent to Germany for racial experiments.

The first genocide of modern times saw 15,000 of an estimated 80,000 Herero people left, with another 10,000 living in the diaspora in Botswana till this day. Almost half of the 20,000 Namas died as well. The indigenous communities claim that their decimation lies at the root of their marginalised position today.

The German colonial occupation is still reflected in Namibia’s unequal landownership with white farmers, many of German descent, owning most of the commercial farmland.

After three years of negotiations a Namibian delegation on Monday night left Germany with 20 out of an estimated 300 skulls stored at German universities and research facilities.

The handover in Berlin was marked by the walkout of a German minister of state Cornelia Pieper, whose speech was disrupted by protests. So far, Germany has failed to apologise for the massacre, and it refuses to pay reparations. The Namibian delegation was angered by her departure.

“We are here to receive the skulls of our ancestors,” Hengari Erenfried told IPS, while hoping to catch a glimpse of the precious remains. “These are our grandparents that were brutally killed by the Germans. The Germans definitely have to pay.”

“We want them to acknowledge that they killed our people,” said Katjivikua. “That they desecrated their bodies and cut of their heads. Among those skulls is a four-year old child. That is so painful. The Germans must pay. Why can they pay other tribes that they killed like the Jews? Because they are white?”

The next day, on Wednesday, at a memorial service at Heroes Acre near Windhoek, the crowds have disappeared. A few hundred Herero and Nama men and women have been bussed in to show support, but they are by far outnumbered by the dignitaries and their entourage travelling in shiny black Mercedes and oversized SUVs.

Many Nama and Herero people feel the majority Wambo tribe dominating government does not care about their marginalised position.

Eighteen dull grey boxes sit solemnly on a table, simply marked ‘Herero’. In a glass case two exhibited skulls are a morbid reminder of the horror of a century ago.

“These remains were taken in disgrace after the genocide by the colonial powers as proof of their victory and superiority,” exclaimed Lutheran bishop Zepeniah Kameeta. “With this repatriation, the stage is set for other skulls to return home.”

“The Germans did not just wipe out a population, but they severed the heads of small children and sent them to Germany for experiments. This is a brutal violation of common decency and an affront to our values as Africans,” said Namibian President Hifikepunye Pohamba in his address.

Government officials, however, shied away from demanding compensation, stressing the good relationship between the two countries. The German ambassador, Egon Kochanke, in turn expressed his ‘deepest regret’, while again failing to formally apologise.

The leaders of the affected ethnic communities on the other hand were merciless in their comment on Germany’s role in the extermination.

“The German government showed no interest in our visit. We hold the opinion that they withhold the truth from us, or that they are shy or afraid,” said Nama chief David Fredericks, who was part of the delegation that went to fetch the skulls from Germany.

“I want to express my deepest and bitter disappointment that the German state still refuses to admit the atrocities against my people. Their government’s failure to take proper responsibility by handing over the skulls themselves is a further renunciation of the human existence of the Nama and Herero people. They still regard us as sub-human beings, souvenirs to be brought back home. We will persist in our demand for restitution.”

Herero paramount chief Alfons Maharero said they were “dismayed and disappointed over the inhospitable treatment that they received in Germany.”

“This humiliating reception leaves much to be desired. We want full compensation for the blood of our forefathers,” added Herero paramount chief Alfons Maharero.

“Today the spirits of our forefathers must rejoice to hear the mother tongue of the African soil. After their skulls were dissected, emptied of their brains and turned around, boiled in pots and scraped clean, to prove a racist and fascist ideology that held that the black man was inferior.

“After they were treated like chimpanzees in a laboratory. Today we bring them home with tears in our eyes,” Maharero said.