WINDHOEK, Sep 29 2011 (IPS) - Climate change is increasingly playing a role in North-South trade, as carbon emissions are being used as an excuse to protect markets, with poorer countries likely to lose out. 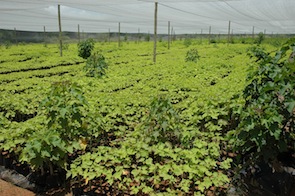 A few months before the 17th Conference of the Parties to the United Nations Framework Convention on Climate Change in Durban, South Africa, there is little hope of a binding agreement on greenhouse gas emissions.

It is unlikely that the Kyoto Protocol, whose binding emission cuts for developed nations are set to lapse in 2012, will be extended.

The absence of a legally binding agreement and especially a proper enforcement mechanism for such an agreement will lead to a surge in trade disputes and heightened protectionism, predicted experts at a Sept. 27 trade meeting in Windhoek.

The meeting, organised by the Agricultural Trade Forum and the Friedrich Ebert Stiftung foundation, a private non-profit German organisation that promotes democracy, social justice, and peaceful international understanding, looked at the impact of climate change on trade, especially in Southern Africa.

“Climate change will damage infrastructure and cause an increase in weather variability, which in turn impacts on primary sectors like mining and agriculture. Greenhouse gas emission caps could furthermore affect the transport sector,” explained Laudika Kandjinga from Integrated Environmental Consultants Namibia (IECN).

“These difficulties on the supply side mean that prices, especially food prices, are likely to rise. Transport cost would go up and there would be significant rehabilitation costs for infrastructure. This affects trade flows.”

These are gloomy prospects for Namibia, a country where 70 percent of the population depends on agriculture and whose foreign revenue is largely earned through the export of raw materials.

But on a global scale climate change could see tariff walls, which were painstakingly broken down over the past decades, being resurrected, thereby affecting market access for the South.

“The climate change debate is increasingly framed as a competition debate,” noted Peter Draper of the South African Institute of International Affairs. “Take the strict carbon legislation in the European Union and some states in the United States. This results in companies relocating the more pollution-intensive part of their production to countries with less stringent legislation, like China.

“Not only does this make the problem worse, because emissions are moved from a controlled to an unregulated environment, it also causes job losses. In response to this leakage the U.S. and EU are trying to level the playing field by instituting border carbon adjustments, which are essentially tariffs.”

Already, said Draper, the U.S. is reluctant to sign any climate package that does not cater for border carbon adjustment.

“For China and India this poses a huge problem…these ‘adjustments’ could easily be used to slap across the board taxes on their products.”

In the transport sector, the drive for greener, more efficient ships will also come with a price tag attached.

“The rising cost structure of ships, together with generally higher energy prices, might lead importers to cut their supply chain. Shortening of supply chains by developed markets could be a problem for countries like South Africa that are far from markets,” said Draper.

On the other hand, countries worldwide are positioning themselves to grab a piece of the growing renewable technology market and have not shied away from old-fashioned protectionism in the process.

“We will see an increase of disputes on tariffs and subsidies for renewable technology,” commented Draper.

“Recently Japan took the Canadian state of Ontario to the World Trade Organization because of discrimination against foreign suppliers of renewable energy. A similar case played out between the U.S. and China.

“The struggle over carbon emissions and renewable energy markets feeds into climate change protectionism. As long as the Doha round of trade talks (which would have reduced subsidies for developed countries’ agricultural industries, thus allowing developing countries to export) stays comatose, you are likely to see these disputes escalating.”

“Because 94 percent of South Africa’s energy comes from coal plants, products from sectors that use a lot of dirty energy will likely fall under some border carbon adjustment regime,” said Draper.

Countries in this region that rely heavily on agriculture could face scrutiny from importers on the carbon-intensity of their production methods and be negatively affected by the green labels that retailers increasingly use to bar imports.

Asked about whether climate change will bring opportunities for industry, Draper seemed pessimistic.

“There might be some opportunities to benefit from developed countries moving their production, but this could be negated by border carbon adjustments. It’s hard to see the silver lining, quite frankly.

“There is also a possibility South Africa will relocate industry and energy generation to neighbouring countries to cut its emissions. Or locate electricity plants closer to coal reserves in another country, to minimise transport pollution. This could create income and jobs in these countries and promote regional economic integration,” Draper said.

But independent economist Klaus Schade thinks such a development could be frustrated by rising transport costs “which would in turn argue against lengthening supply chains by locating industry outside of South Africa.” He thinks small countries need to play the green energy card more pro- actively.

“For instance by being carbon neutral in the tourism sector, which might appeal to visitors. Think of solar water heaters for lodges and electric vehicles for game drives,” Schade said.

Also much more research and development is needed in the agricultural sector to introduce breeds and varieties that can withstand extreme weather conditions. Other opportunities would arise from adopting a low-carbon development path, said the experts.

She stressed that countries in the region mainly focus on adapting to climate change, rather than mitigating greenhouse gasses, of which they produce little. But this does not mean that green technology is irrelevant for Southern Africa.

“Namibia with its long coastline and many days of sunshine is excellently positioned to reap the benefits of wind and solar energy,” Braby said.

However, some think that Namibia is not ready for this.

“We are not ready for renewable energy,” countered the ruling South West Africa People’s Organization member of parliament, Ben Amathila. “We need to make laws that are futuristic in order to exploit wind and solar technology, but decision makers have far too little knowledge of these issues.”