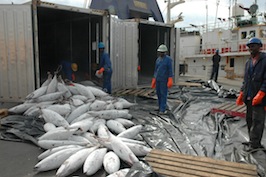 Early September trade officials of the seven-member (Southern African Development Community) SADC-EPA bloc will meet to finalise the agenda for talks with the EU later that same month. The last real engagement of the two parties was in November 2010 and since then it has gone quiet around the EPA.

“Support from the side of the EU has dissipated. There is markedly less interest from Brussels this year to push the process. The EU is frustrated by the little progress made and currently focuses more on Asian countries,” observed Paul Kruger, a researcher at the Trade Law Centre for Southern Africa in Cape Town, South Africa.

For the past decade the EU has been putting in place EPAs with the 79-member strong African, Caribbean and Pacific (ACP) group of states to meet the World Trade Organization’s (WTO) demand for reciprocity in world trade.

Last year countries decided to leave a divisive interim EPA (IEPA) behind and focus on concluding a full trade deal instead. But in doing so, the parties are renegotiating the IEPA article by article, while also bringing new concerns to the table – a time-consuming exercise.

A final agreement will prescribe reciprocal liberalisation of tariff lines and continued duty and quota free (DFQF) access to Europe’s high-yield markets. Annexes to the EPA text will outline different schedules for various countries, reflecting their wide-ranging stages of development.

South Africa, whose preferential trade is covered by a separate Trade Development and Cooperation Agreement (TDCA), is using the EPA talks to get even better access for their products.

The TDCA, when fully implemented in 2012, will open 86 percent of South Africa’s market to the EU. Conversely, the EU will liberalise 94 percent of its market for products from South Africa.

“In order to get additional advantage from signing up to an EPA, the South Africans are looking at securing better access for agricultural products from the region, but the EU has had difficulty in convincing its member states to agree to this,” Kruger said.

“South Africa sent a list of proposals regarding tariffs lines and market access for agricultural products. The EU took five months to respond and now the parties will have to discuss the offer on the table,” said Ndiitah Robiati, director of the Agricultural Trade Forum in Windhoek, Namibia.

South Africa’s increased dominance in the talks once again puts a break on the negotiating process. Botswana, Mozambique, Lesotho and Swaziland have signed the IEPA and are ready to move forward. Angola is a mere observer in the talks and though Namibia previously refused to sign, the country has indicated that most of its concerns have been met.

“There are a number of ongoing unresolved issues in the EPAs, but Namibia’s particular concerns seem largely addressed,” said Robiati.

The debate now largely focuses on technicalities, such as Namibia’s 200 nautical miles Economic Exclusive Zone (EEZ) – a zone beyond and adjacent to the territorial sea of a coastal state.

“Normally this zone is just 12 nautical miles wide and the EU wants to understand the implication of Namibia’s territorial claim for trade,” said Robiati.

Major policy space concerns, such as the Most Favoured Nation (MFN) clause, that automatically extends preferential trade agreements between SADC and third parties to the EU, seem to have been toned down. “Namibia is now merely committed to consult the EU on this on a case by case basis,” Robiati said.

But while the Europeans can afford to be accommodating to the smaller Southern African Customs Union (SACU) states, in South Africa it finds an industrialised trade partner.

“There is no way Brussels will grant South Africa the same access as the others,” said Namibian independent trade analyst Wallie Roux.

The different approach towards South Africa causes friction in SACU. “Differences between the EU’s stricter approach to South Africa and the other SACU members are a sticking point, exactly because all these states are in one customs union,” said Roux.

So the same incongruence that existed under the TDCA will continue under the EPA.

“The process of integrating the tariff lines of the TDCA in the EPA is almost complete, there are 10 or so tariff lines outstanding,” said Roux. “There are also other trade obstacles flowing from this definition of parties, like cumulation issues.”

“Cumulation relates to BLNS (Botswana, Lesotho, Namibia and Swaziland) countries using South African products as a basis or component for their own exports to the EU. This is currently not allowed. It’s basically a backdoor the EU wants to keep closed to prevent South Africa from channeling their products through the BLNS.

“It raises the question why the EU can act as a homogenous bloc, while countries in the SACU are approached on different levels,” Roux explained.

Another major headache is geographic indicators, which refers to the branding of products by their geographical origin, such as “Champagne”. In the EU Champagne can only be used for sparkling wine that comes from the Champagne region of France.

Other outstanding issues include the position of South Africa on infant industry protection and export taxes which, according to Robiati, are slowly being solved.

All in all 2011 seems a continuation of the ambiguity surrounding the EPA while players rapidly lose interest.

Roux said: “It seems the EU is expanding the negotiation agenda, instead of solving the existing problems.”

“Ultimately Southern African countries risk losing their DFQF access. It’s a concern that even the countries that signed an IEPA are not implementing it. Possibly the EU is delaying the process so they can have more leverage, since in the end it all comes down to WTO compatibility,” said Kruger noting that meanwhile the private sector is holding its breath. “Sectors like the tobacco industry really don’t want their markets cut off.”

“A mini-waiver has been given, which will buy states some more time to conclude the negotiations,” said Robiati. “This gives some breathing room, but all it takes is one non-ACP country, like Panama or Indonesia, to make noise at the WTO.”