WINDHOEK, May 12 2011 (IPS) - A new film explores the real complexities of relationships for young people in Namibia, and the effects of gender inequality and culture on the choices people make about their sexual lives. 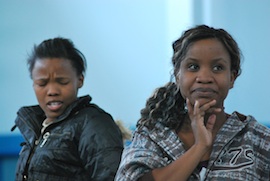 "Sex and Chocolate" delivers messages about sexual health in the context of real pressures on young people. Credit: Rachel Coomer/LAC/IPS

Lucy is a second-year student at the University of Namibia. She is in love with David, but he is a player who Lucy finds out is having unprotected sex with the other women he dates, including an HIV-positive beauty queen. When Lucy finds out David cheats on her and puts her health at risk, she has some hard choices to make.

The plot of “Sex and Chocolate”, a movie produced by the Legal Assistance Centre (LAC) and youth organisation Ombetja Yehinga Organisation (OYO), aims to capture the intricacies of young people’s sexual networks.

“Relationships in the 21st century are not easy, they are complex,” the LAC’s Yolandi Engelbrecht told an audience of 75 or so University of Namibia students at the launch of the movie on May 11. “The choices we make in our relationships have consequences. What if you are just a 21-year old student faced with Lucy’s problem? Do you have the courage to walk away?”

The dilemmas faced by the protagonists in Sex and Chocolate are very real. The impact of risky behaviour, including multiple concurrent partners and failure to use condoms, is reflected in the 2010 Sentinel Survey finding that HIV is again on the increase in Namibia, after years of steady decline. The country’s prevalence rate is now 18.8 percent, up from 17.8 percent in 2008.

HIV is not the only risk. Last year alone, 1,493 high school learners dropped out of school because of pregnancy.

“The story in the film is something that happens in everyday life. Girls love someone, who doesn’t love them back and they give up everything,” says El-Juanita Philander who plays Lucy. “It is important that young people make the right decision. There are always two choices in life.”

While a lot of effort has gone into raising awareness around HIV and AIDS in Namibia and elsewhere, NGOs are realising they haven’t penetrated the core of the issue.

“We talk a lot about HIV/AIDS, but we find it difficult to talk about the dynamics in relationships,” says the movie’s director, Philippe Talavera, who also runs the youth organisation, OYO.

“Often we focus on issues like HIV or sexual violence. We don’t ask the question what is the essence of a relationship, what is the point of being together?” adds producer Dianne Hubbard, head of the LAC’s Gender Research and Advocacy Project.

Namibian women frequently accept cheating by their male partners, and feel unable to insist on condom use in order to preserve their relationships says Hubbard.

“Particularly women still need to learn that they don’t have value just as the partner of a guy. We want to fight against that idea. A relationship should be a place where two people that are comfortable with themselves meet because they want to be together.”

The film tries to deconstruct prevailing ideas on masculinity in Namibian society by juxtaposing the attitudes of David and his best friend Peter.

“There is this idea that a man must be a player, but Peter who is faithful to his girlfriend Candy is a very masculine type. With this, we want challenge the myths surrounding masculinity,” says Talavera.

“The story is also about communication. Lucy envies the bond that Peter and Candy have, which is about more than sex. She would like to have a relationship like that with David, but she never tells him, she doesn’t communicate.”

“You bring me chocolate,” murmurs Lucy to herself at one point in the film. “Why can’t our relationship be about more than sex and chocolate? Why can’t you make me happy, David?”

Rather than trying to drive home message of safer sex, the film focuses on the underlying dynamics of peer pressure, friendship, support networks, assertiveness and the right priorities.

The film drew mixed reactions – roughly along gender lines – at its premiere. While the men in the audience sometimes sympathised with the player David, the women applauded Lucy for choosing to leave him.

“So many of the issues this society is faced with boil down to a lack of gender equality and mutual respect,” explains Hubbard. “It gets boring to talk about domestic violence: let’s talk the underlying issue, the relationship. We also feel that drama is much better way to convey the message.”

According to Hubbard and Talavera, the gap between knowledge about HIV and actual behavioral change remains huge in Namibia.

“And we are not getting any closer to closing that gap,” says Hubbard. “If an educated guy like David, with access to free condoms, doesn’t use them, we have to ask ourselves what is the next step [in stopping HIV]?

“So the film is about more than just deciding whether or not to date a particular guy. It’s about how social norms and culture can affect the decisions we make. Can a young girl who is socialised to be submissive find the assertiveness to say no in a relationship? Are informal sexual networks the new polygamy in Namibia?”

These are questions the cast struggled with while making the movie. The actor who plays David, for example,is Himba, a culture in which polygamy is widespread. He might personally support Lucy’s right to walk away from the relationship, but his cultural background says something else.

“It led to a lot of discussion on these practices. And it’s a real issue in society. Young men ask themselves, ‘If my father had four wives, why should I satisfy myself with one?” says Hubbard.

“It is an interesting issue that is still debated heavily in society, all the way up to parliament.”

The movie has two endings. In the first, Lucy leaves David before any harm is done. In the other – shot in  sombre black and white – she stays with him and grows increasingly depressed, fails her final exams and worries constantly about her health status.

Sex and Chocolate is part of a package called Think Twice. The second movie Teddy Bear Love, which deals with relationship issue in a high school will be released in June.