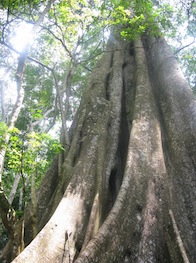 Maathai, the first African woman to be awarded the Nobel Peace Prize, in 2004, was founder of the Green Belt Movement , which aimed to reforest Kenya, stop soil erosion and provide firewood for families by paying poor women to plant trees. She passed away on Sep. 25.

“In the current era of climate change, the professor has left behind adaptation actions that we must implement in order to save the poorest of the poor that solely depend on the environment and natural resources,” said Gaster Kawuubye Kiyingi, the national project manager for Tree Talk Plus , a network of organisations engaged in the development and sustainability of the forestry sector in Uganda.

Kiyingi said some of these adaptations include campaigning for forest-based enterprises and the sustained use and planting of more trees.

Since its inception in 1997 the Green Belt Movement has directly planted over 30 million trees in Africa and assisted nearly 900,000 women to establish nurseries and plant trees to reverse the effects of deforestation.

The United Nations estimated that by the time of Maathai’s death over 11 billion trees had been planted, especially in Africa, by different organisations through her campaign.

Kiyingi said Africa needs to stay focused on the late professor’s initiatives for environmental sustainability because it is key to attaining the Millennium Development Goals – eight time-bound goals tackling poverty and its various dimensions that the U.N. member states agreed to in 2000.

“There is an urgent need for Africa to address issues relating to environmental laws and governance, law enforcement and trade in natural resources. They are a ‘cancer’ eating at the very core of our leadership, and it is what Maathai (fought against),” he told IPS.

According to Jan Vandenabeele, the executive director of Better Globe Forestry Limited, a Kenyan afforestation company, there remains a need for civil society and social organisations to join hands to plant more trees and harvest them sustainably. But, he said, Kenya may be close to achieving Maathai’s dream.

“In Kenya the new constitution is very clear that every piece of arable land should have at least 10 percent of forest cover. If this is implemented, then we will be living the dream of the late Professor Maathai,” said Vendenabeele.

He added that for Africa to realise the dream of a green continent there needs to be more investment in environmental research.

Dr. Maxwell Kinyanjui of the Woodlands Trust 2000, a Kenyan-based organisation that provides afforestation and allied services to those involved in the tree industry, said that in order to address the issue of deforestation in Africa, leaders and related organisations must begin by addressing energy sources.

Land grabbing is another problem that continues to affect forests in Africa. Maathai had always been steadfast in protecting natural resources, not only in Kenya, but also in other African countries. In Uganda she campaigned to save the Mabira Forest Reserve.

“I remember Professor Maathai for her efforts to protect Karura Forest on the outskirts of Nairobi city. The forest land had already been (claimed) by individuals linked to the former political regime between 1998 and 2002. But she protested until all the people who had been allocated land by the then government left,” said Paul Barasa, a former senior corporate affairs officer at the Kenya Forestry Research Institute.

Now Uhuru Park is the largest public park in Kenya. It is adjacent to the city and is usually bursting with activity. Couples row boats on the lake, hundreds of children play on the grass while their parents relax under trees. Thanks to Maathai’s campaigning it is one of the most serene areas in Nairobi.

Kiyingi says more needs to be done to save the trees and forests of Africa.

“Each African country needs to have proper policies that can protect tree cover from illegal logging and encroachments. But the sad thing is that the very leaders who are supposed to protect the forests are the same people who grab forest land, or conspire with grabbers,” said Kiyingi.

Kiyingi said that there are currently several tree planting initiatives in Uganda, most of which are linked to Maathai’s Green Belt Movement.

“Such efforts must be sustained at all costs because the environment is our livelihood,” he said.

Maathai’s idea of providing incentives for people to plant trees needs to be replicated in order to realise the dream of a green Africa.

“The idea of undertaking tree planting as an income-generating activity will be sufficient motivation for tree planting across Africa and as a result, there seems to be a ray of hope in re-greening Africa.”