NEW YORK, Sep 26 2011 (IPS) - Last night, Wangari Maathai, the first African woman to win the Nobel Peace Prize, died. Most people think of Ms. Maathai as an environmentalist, planting trees. In reality, her environmental activism was part of a holistic approach to empowering women, advocating for democracy, and protecting the earth. 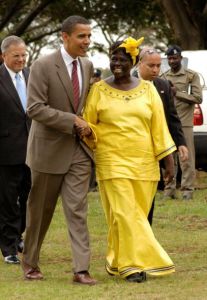 Wangari Maathai was Kenya’s foremost environmentalist and women’s rights advocate. She contended that women have a unique connection to the environment and that human rights violations against women exacerbate environmental degradation.

Throughout Africa, as in much of the world, women are responsible for tilling the fields, deciding what to plant, nurturing the crops, and harvesting the food. They are the first to be aware of environmental damage that harms agricultural production. If the well goes dry, they are the ones who are most concerned about finding new sources of water and the ones who must walk further to fetch it.

As mothers, women are often the first to know when the food they feed their children is tainted with pollutants or impurities, because they can see it in the tears of their children and hear it in their babies’ cries.

In recognition of this, Ms. Maathai founded the “Green Belt Movement“. On Earth Day, 1977, she launched a one-woman campaign to reforest Kenya. She hoped to help stop soil erosion and to provide a source of lumber for homes and firewood for cooking. She distributed seedlings to rural women and set up an incentive system for each seedling that survived.

She encouraged farmers, 70 percent of them women, to plant protective “green belts” to stop soil erosion, provide shade, and become a source of timber and fuel.

It was a simple concept and it was vastly successful.

She won the Africa Prize for helping to stop hunger. The Kenyan government heralded her as one of the country’s most exemplary citizens. Newspapers and local organisations lauded her.

Her commitment was tested when President Daniel arap Moi decided to erect a 60-story skyscraper in the middle of Nairobi’s largest park. The office building was to be a monument to Moi, and plans called for the entranceway to be graced by a two-story statue of the president striding, Leninesque, into the future.

When Ms. Maathai condemned the plans, which would have paved the only green space for tens of thousands of Nairobi’s poor, officials told her to stop. When Ms. Maathai took her campaign public, security forces came to her office and home, threatening her with arrest. When she refused to be silenced, she was subjected to a harassment campaign orchestrated by the government.

Members of Parliament denounced Ms. Maathai and called her organisation “a bunch of divorcees”. The government-run newspaper questioned her past sexual activities, spread rumours that she was a lesbian, and police detained her and interrogated her, with no warrant and no charges.

Ms. Maathai then organised a demonstration of women elders in the park itself. Riot police harassed, humiliated, beat, tear gassed and arrested Ms. Maathai and her companions.

That act of defiance cost Ms. Maathai her standing with an all- powerful government, her funding, and her job. But the peaceful protest she led that day became a rallying cry for women activists, environmentalists and democracy leaders.

I had met Wangari Maathai months earlier, on a human rights mission to Kenya for the RFK Center for Human Rights, and we had become instant friends. She spoke passionately about her work with rural women, and the difficulties they faced with little income, absentee husbands, a hostile government, and few resources for food, water, and firewood. Ms. Maathai worked with them to start planting trees.

Along with a small cadre of Kenyan human rights defenders, the RFK Center demanded Ms. Maathai’s release and the prosecution of the riot police who had so brutalised peaceful protesters. More determined than ever, Ms. Maathai continued her work, using planting trees as an organising tool for women’s empowerment and political participation.

I am proud to say that Ms. Maathai was among the heroes profiled in the book I wrote about human rights defenders, “Speak Truth to Power”.

Wangari Maathai was a mighty woman, creative, fearless and full of love. We will miss her.