JUBA, Apr 3 2012 (IPS) - Before Bor B Primary School built latrines on the school grounds two years ago, students would leave during their first break to head home. Most did not come back until the next morning. 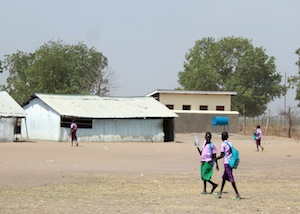 Before Bor B Primary School built latrines on the school grounds (pictured in background), students would leave during their break and not return. Credit: Andrew Green/IPS

Teachers ended classes early, because they did not have access to latrines, either. They would go to the nearby town, ask permission to use the facilities at one of the hotels, and then come back and reassemble the students who were left.

Madin Chier, the deputy head teacher at the school in the capital of Jonglei state, said the quality of the school’s education suffered. But now that 16 latrines have been installed, “there are no more problems,” he said.

Building a functional education system in South Sudan requires more than just latrines. Less than half of children who should be in school are. The country does not have enough classrooms, teachers or basic school supplies to educate all of its children.

Younger pupils compete for spots that are available in primary classes with teenagers, who were denied educational opportunities during the country’s decades-long war. The majority of those classes are held in the open air or under trees. That means when the rainy season hits, the result is a six-month break until the storms pass.

But for those students who have managed to get into a school – even those held under a tree – access to latrines is critical to keeping them there. That is especially true for girls, according to Emily Lugano, the education technical advisor for Save the Children in South Sudan.

Save the Children has built or rehabilitated toilet facilities in 71 schools across seven of the country’s states. These include hand-washing stations. It is part of the NGO’s initiative to improve learning environments, she said. But it is also a safety precaution for girl students.

In South Sudan, girls are more likely to be pregnant by 15 than they are to be in school. When they do attend, they are often subjected to harassment and intimidation, Lugano said. This is exacerbated in some of the schools where Save the Children works. In many places girls were expected to share latrines with boys or to use a field near the school.

“They get abused and harassed when they’re sharing latrines with the boys,” Lugano said. And “the girl feels very unsafe going to the bush to help herself… It’s a very, very crucial safety issue for girls at school.”

During their menstrual periods, girls refused to come to school, where they would have no opportunity for privacy. Chier said some of the girls at his school would not show up for a week or more every month, dropping them further behind the rest of the class.

“Across most of the developing countries,” Lugano said, lack of access to private latrines “contribute a lot to girls actually performing poorly in school, because they miss out on the syllabus.”

Because it is a school, there is also an educational component that comes along with the latrines and hand washing stations that extends beyond gender boundaries. Chier said his school uses the facilities to teach students about basic hygiene, which has helped reduce illness.

The initiative has been popular at Bor B, leading the students to form a Sanitation and Hygiene Club. Simon Peter Maiur, a 20-year-old in Grade 7, joined the group recently. He’s learning the club’s skits and songs, which encourage students to wash their hands and take care of themselves. He also helps patrol the school grounds for trash.

“It shows us how to clean our body, by cleaning the school,” he said.

Part of the concept behind the club is to turn the students into teachers, taking their messages about basic hygiene from the schools back to their communities.

“Hygiene promotion practices are not effective in this country,” Lugano said. Most towns and rural areas lack basics, like running water, but she said the students can still help “translate basic hygiene back to the community.”

Maiur said that is part of the club’s mission, to share information with friends and family. He said, with his encouragement, his family now does the best they can to practice better hygiene, like hand washing.

But these efforts only work in areas where there is a structured education system. South Sudan’s government allocated less than six percent of the 2011 budget to education. And the vast majority of that, Lugano said, goes to paying teacher salaries. Overall government funding for education looks to drop, as the shutdown of the country’s oil pipeline has taken away 98 percent of the country’s revenue.

At Bor B, Chier had let his Grade 8 students leave early, because the classrooms were all occupied by younger students, some with 150 students crammed in.

It is left to NGOs, like Save the Children, to continue to fund infrastructural development and to get basic materials, like textbooks, into the hands of students.

While programmes to improve sanitation and hygiene within schools can have a far-reaching impact on health and safety outside school grounds, Lugano said, those efforts are only effective if there are schools to deploy them in.