JUBA, Mar 24 2012 (IPS) - Martha Borete Angela’s gaze sinks to the ground as she admits neither of her two children was delivered by a midwife or doctor. The 28-year-old South Sudanese woman shared this fact in front of her classmates: first-year students in a programme for midwives at the Catholic Health Training Institute in Wau, a city in the western part of the country. 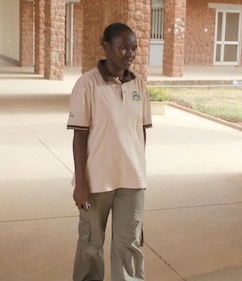 Martha Borete Angela is a first-year students in a programme for midwives at the Catholic Health Training Institute South Sudan. Credit: Andrew Green/IPS

“I didn’t have the knowledge about midwives,” she explained. But if she has another baby she will definitely consult a midwife “to be an example to the community.”

South Sudan has the highest rate of maternal mortality in the world, according to the United Nations Population Fund. The government estimates that more than 10,000 women die every year giving birth and 76,000 experience severe complications. Here, women constitute 60 percent of the country’s eight million people.

The high mortality rate is exacerbated by a widespread shortage of professional midwives to consult with women during their pregnancies and identify potential risks. A national survey from three years ago reported less than 150 midwives in the national health system.

“Our mothers, some of them, they pass away from delivering,” said Ropani Raship, a 20-year-old classmate of Angela’s at the Catholic Health Training Institute. “They don’t have a chance.”

Instead of trained care, mothers turn to traditional birth attendants, like Angela did when she had her second child. Some do not get any assistance at all.

Everyone, from the South Sudanese government to the NGOs propping up the country’s nascent health system acknowledge that developing the sector generally – and its response to maternal deaths, specifically – depends on getting more trained workers into the system as quickly as possible.

Angela, Raship and their classmates represent that possibility: A cadre of young, fully trained midwives, who will be placed in clinics and hospitals around the country once they finish the programme and achieve government certification.

But it will be three more years before they can start filling that gap. And they will do it – along with graduates from the country’s two other certificate programmes – a handful at a time, in a country where thousands of midwifes are needed. That means, for the foreseeable future, many pregnant women will be left to rely on traditional birth attendants and other frontline health workers.

These are often neighbours who “believe they have a gift of healing, or they learned midwifery through mentorship,” said Alaa El-Bashir, the country coordinator for the Maternal, Newborn & Child Survival Initiative (MNCSI) out of Massachusetts General Hospital. Most are not trained to identify or treat serious complications.

The situation reveals a larger debate in this new country: How do you allocate finite resources to save lives now, while also making the long-term investments that will build a sustainable health system?

For its part, MNCSI has decided to do what it can to improve the skills of the frontline workers. The initiative is reaching out to them with trainings and a bag of basic health supplies – scissors, gloves, a string for tying the umbilical cord.

Over a year and a half, MNCSI has put 72 trainers through a master course. They, in turn, have reached out to train more than 700 frontline health workers across seven of the country’s 10 states. An eighth state will be brought into the fold in a few months.

The idea, according to El-Bashir, is to get health workers trained to a level where they can at least recognise potential complications and refer people to a health facility early. MNCSI provides a pictorial checklist for the health workers to consult during the course of the pregnancy to recognise warning signs. And if no complications are apparent, they can help safely deliver the child.

MNCSI has also introduced a cheap tool to help women who start haemorrhaging after birth: a uterine balloon kit. It’s a simple innovation – a catheter with a condom attached to the end. The condom is inserted into the uterus and a syringe used to fill it with water. This can help staunch the bleeding until the woman is taken to a health facility.

After a recent tour of some of the areas where the uterine balloon kit has been distributed, El-Bashir said the frontline health workers have been able to use the tool without any problems. Of the recorded cases, MNCSI reported only one mother had passed away.

“We are saving lives,” El-Bashir said.

There are always going to be unexpected complications among delivering mothers, though, said Susan Purdin, the country director for the International Rescue Committee (IRC). And they cannot always be anticipated by observing risk factors. South Sudan’s best option is to ensure all pregnant women have access to qualified health workers.

“Everybody needs to know that any woman could have a complication and needs to get care,” Purdin said. That requires rallying, not just mothers, but fathers, traditional birth attendants and taxi drivers. It also requires making them aware that, if problems arise as the woman goes into labour, they should be poised to take her to a health clinic.

IRC has been working in what-is-now South Sudan for more than two decades, with many of its programs centred around healthcare. It currently supports 30 health centres in the west and north of the country, five of which offer maternal health services.

On a recent visit to one of the centres, Purdin said she witnessed a midwife save five lives. One mother, after giving birth to twins, started to haemorrhage. The midwife stopped the bleeding just as another woman in labour arrived, her baby coming arm first. As she cared for the first mother, the midwife got the second into an ambulance bound for a hospital that could assist her.

“It happens every day,” Purdin said. “It’s not always that dramatic, but having qualified midwives in health facilities where there are supplies and equipment and a referral system is the way to save mothers’ lives. And it can be done.”

It will not be done quickly, though. It requires raising awareness within the community and then working to make sure that the promised services are available. That means building more health facilities and getting more midwives, like Angela and Raship, into the system.

But back in Wau, the students at the Catholic Health Training Institute realise that even as they are deployed, the reliance on traditional birth attendants isn’t going away anytime soon. Instead of presenting an either-or approach, many said they were prepared to offer training to frontline health workers and to take advice from them on how to work in the community.

That, they agreed, is the best way to save the most mothers’ lives.