DADAAB, Kenya, Sep 19 2011 (IPS) - Dr. Beldina Gikundi’s daily prayer is that the handful of malnourished pregnant Somali women who go into labour that day at the Dadaab refugee complex do not have complications, which might require a caesarean section. Because Gikundi knows that Somali cultural beliefs mean that she and her staff at Hagadera Hospital will most likely not be able to immediately operate on the women and save their lives and those of their unborn children. 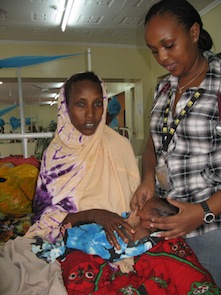 “Somali women have specific people who must give consent before the procedure begins.

“We have, in the past, lost infants because of prolonged labour, which are lives we would have saved if it were not for these cultural beliefs,” said Gikundi, the doctor in charge of the maternity unit at the hospital. She said that each day between three to five women go into labour here.

Hagadera Hospital is a fully-fledged health facility at the Dadaab refugee complex, in North Eastern Kenya. Dadaab, the biggest refugee camp in the world, is divided into three camps: Ifo; Dagahaley; and Hagadera.

It is home to over 440,000, mostly Somali, refugees who have fled the famine and drought in their country. According to the United Nations Refugee Agency (UNHCR), 70,000 people fled to Dadaab from Somalia in the Horn of Africa in June and July and 1,500 arrived daily in the months to follow. The rate has since gone down.

Hagadera Hospital is run by the non-governmental organisation International Rescue Committee and has 120 beds. It provides free inpatient and outpatient services and has a 24-hour operating theatre for emergency surgery.

But despite this, the lives of Somali women with labour complications remain at risk.

A majority of the refugees at Dadaab are women, as their husbands and men-folk either remained behind in their villages to protect their belongings, or were working in the Somali capital Mogadishu at the time the famine struck and their families were forced to flee the region in search of aid.

Gikundi told IPS that on many occasions the hospital has had to either send someone to Mogadishu, or to the women’s villages in south Somalia, to search for their husbands or fathers-in-law for consent.

“As a result, we have seen women remain in labour for two or sometimes more days before we get the right people to give the consent for a life-saving operation,” she said.

Apart from losing the unborn infants, said Gikundi, the women run a high risk of developing vesicovaginal or obstetric fistula.

Obstetric fistula is caused by extended pressure of the child’s head against the soft tissue in the mother’s pelvis during childbirth. The tissue eventually dies from the lack of blood supply, and a hole develops between either the rectum and vagina or between the bladder and vagina.

Women who suffer fistula are usually unable to control the flow of urine or faeces. They are often stigimatised by their communities and families because of their condition.

“We repair an average of three cases of vesicovaginal fistula every month, which is a very high rate,” said Gikundi.

“Delay in seeking care for pregnancy-related complications and delay in consent for life-saving procedures like caesarean sections, among other reasons, have hampered progress in reducing maternal mortality and morbidity among refugees in Dadaab,” said Ann Burton, a senior public health officer for UNHCR at Dadaab.

She said 14 women died during labour at Dadaab between January and July.

“This is a very sad situation because no woman is supposed to die while bringing forth a new life,” Burton said.

Other obstacles to maternal health are the practice of female genital mutilation (FGM) and the almost non-existent use of contraceptives.

According to public health experts at the UNHCR, almost all the Somalis at Dadaab practice FGM.

Studies in many countries have linked FGM to the increased risk of maternal and child morbidity and mortality due to obstructed labour.

“Women who have undergone FGM are twice as likely to die during childbirth and are more likely to give birth to a stillborn child than other women,” explained Dr. Joseph Karanja, a gynaecologist in Nairobi, Kenya.

Burton said that FGM is an emotive subject among the Somali refugees, and it needed to be addressed with caution.

Another obstacle to maternal health among the refugees is the failure of family planning.

The infant nutritional expert at Hagadera Hospital, Hadija Mohammed, said that many Somalis believed that family planning and using contraception was against their religion.

“Though, the truth is that Islam clearly permits family planning,” said Mohammed.

She added that many people wrongly believed that using contraceptives would cause infertility and other health complications.

A July survey by UNCHR of the three camps that make up Dadaab: Ifo; Dagahaley; and Hagadera, found that contraceptive uptake among refugees in the camps was two percent, three percent and one percent respectively.

As a result, the fertility rate at Dadaab is alarmingly high. On average women here have more than nine children in their lifetime.

“I do not have proper statistics, but the average fertility rate at the camp is likely to be more than nine children per woman,” said Gikundi.

However, UNCHR reports that there is a high attendance of antenatal care clinics.

“Between January and July, 95 percent of all pregnant women at Ifo and Hagadera camps attended antenatal clinics four times during their pregnancies, as recommended by the World Health Organization,” said Burton.

Also, between 84 to 94 percent of women at Dadaab gave birth under the supervision of a skilled birth attendant between January and July.

“We also have informants, who are equal to community health workers, who keep monitoring pregnant women, reminding them of the importance of attending antenatal clinics. They will also call for an ambulance in case of any complications or labour pains,” said Gikundi.