NAIROBI, Sep 7 2011 (IPS) - Agnes Kalunda’s doctor feared that because of her slight frame there was a high chance of her developing complications during delivery. 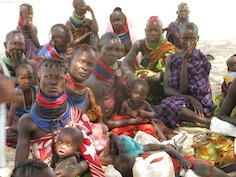 Turkana Women in Kenya. Less than half of all Kenyan women give birth in a medical facility. Credit: Isaiah Esipisu/IPS

So he referred her to the Pumwani Maternity Hospital in Nairobi to give birth to her first child. But Kalunda may as well have had her baby at home in Dandora slum because disinterested nurses left her to give birth on her own.

“My baby was almost falling off the bed when a woman in labour on the neighbouring bed shouted to attract the nurse’s attention. Other women in the ward were crying for help,” the 19-year-old Kalunda told IPS, adding that nurses did not bother to attend to the women in labour. “A nurse came to attend to me after I had already delivered.”

It is this lack of commitment from health workers, experts say, that are among the reasons why Africa may not succeed in achieving Millennium Development Goal (MDG) 5 on improving maternal health by 2015 by reducing maternal mortality by three quarters.

The MDGs are eight time-bound goals tackling poverty and its various dimensions that the United Nations member states agreed in 2000.

MDG 5 was one of the issues discussed at the ‘Multi Stake Holders Policy Dialogue’ of African policy makers, medical experts and development partners, which took place in Nairobi from Aug. 31 to Sep. 2.

Studies conducted by the African Institute for Development Policy (AFIDEP) in East, West and Southern Africa found that most countries are struggling to provide universal access to reproductive health. And only three countries in these regions are on track to achieving MDG 5.

“We can say that only three African countries could be on track to achieving the goal of ensuring safe motherhood in the region. They are Eritrea, Rwanda and Ethiopia,” said Dr. Eliya Zulu, the Executive Director of the AFIDEP.

“Unlike other countries in East Africa, Kenya has not had political will for health care in general. This has seen the figures move in a negative direction,” Zulu told IPS.

Uganda’s success in reducing maternal mortality has been attributed to the direct involvement of President Yoweri Museveni and First Lady Janet Museveni.

Also, since 2006 funds have been allocated in the national budget to mitigate maternal mortality, and there is a legislative and advocacy initiative by the Ugandan parliament.

“We also have a maternal mortality audit, where all deaths are reported to the Ministry of Health … this is used to learn how such deaths can be avoided in the future,” Dr. Collins Tusingwire, the senior medical officer in charge of integrating reproductive health and HIV/AIDS services in Uganda’s Ministry of Health, told IPS.

In Kenya, however, findings from a survey conducted by the Kenya Service Provision Assessment (KSPA) in June found that 64 percent of all women who gave birth in public health facilities across the country were not given necessary medication. More than one third of all women who wanted to give birth at medical facilities complained of being neglected or mistreated by medical practitioners.

Also, only a mere 43 percent of all pregnant women in Kenya give birth under the supervision of a professional healthcare provider.

But Dr. Odette Nyiramilimo, a physician and Rwandan politician, told IPS that traditional birth attendants offered some services to expectant mothers that they did not receive in hospital, like taking care of the mothers’ personal comfort.

“All these small but very important things are sometimes ignored in many public healthcare facilities,” Nyiramilimo told IPS.

In West Africa Ghana has reduced maternal mortality by 44 percent from 1990 to 2008.

Experts say this is because of government’s commitment to effective policy, free antenatal care and delivery services, and expanded national health insurance schemes, which cover both formal and informal workers.

The country has a national policy known as the Community-based Health Planning Initiative – which aims to provide healthcare to those in rural areas.