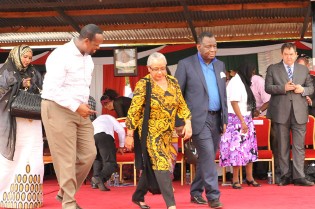 By Josh Butler
The global rate of maternal deaths is reducing faster than any time in history, according to a new report presented to the United Nations on Tuesday.

By Julio Godoy
Improving family planning to avoid unwanted pregnancies in developing countries, as well as assuring girls’ access to education, and women’s participation in the economy, are essential components of a sound development policy, according to Western experts and African activists.

By Carey L. Biron
Within a decade, "most" of the global population could have access to affordable basic health care – if a series of "ambitious" programmes are put into action around the world. This is according to a new report released by the Council on Foreign Relations (CFR) here on Tuesday.

By Ashfaq Yusufzai
Collateral damage caused by the ‘war on terror’, prosecuted by the United States and its allies in Afghanistan since 2001, may well extend to psychological trauma sustained by thousands of women in the bordering areas of northwestern Pakistan.

By Kristin Palitza
Political instability, civil strife and humanitarian crises in Africa have over the past decades reversed countless maternal health development gains on the continent, health experts warn.
Next Page »
ADVERTISEMENT ADVERTISEMENT