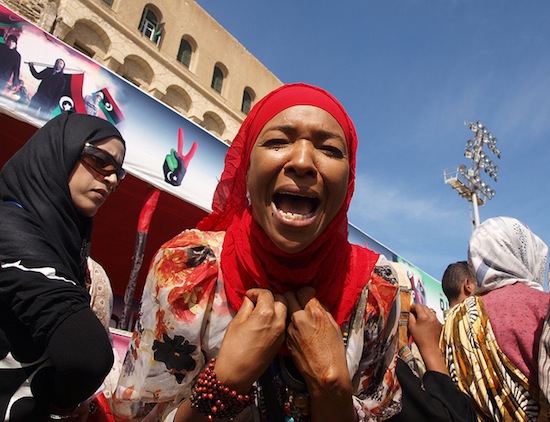 In times of political and financial crisis, the rights women thought they had secured decades ago are once again under attack. Credit: Karlos Zurutuza/IPS

ISTANBUL, Apr 23 2012 (IPS) - The world’s recent financial and political upheavals have not been kind to women. In Libya’s Tripoli, female suicide rates increased tenfold during the revolution, while dismal job prospects have young Greek women abandoning their career aspirations, participants in a global forum on women’s rights said over the weekend. “Many people say this is a time for transformation and moving forward but we know from our work that it’s also a time of instability and uncertainty,” Jamaican activist Mariama Williams, a senior programme officer at the South Centre, said at the closing session of the 12th International Forum on Women’s Rights and Development in Istanbul. “In times of crisis, the solidarity we thought we had, the rights we thought were secured are again being questioned. Whatever is not convenient for growth is being questioned,” Williams said. Participants in the Apr. 19-22 forum, organised by the Association for Women’s Rights in Development (AWID) around the theme of transforming economic power, engaged in questioning, among other things, how economic growth and development should be measured and defined. “If we were to account for inequality, the average Human Development Index would be 23 percent less than it is currently,” Associate Administrator of the United Nations Development Programme (UNDP) and former Vice-President of Costa Rica, Rebeca Grynspan, told the more than 2,000 attendees from 140 countries. From national budgets to financial-stimulus packages, economic policy typically fails to address women’s needs – or to recognise the contributions they make through their unpaid labour, participants said.

But forum organisers also expressed optimism that amid these challenges, the global climate is becoming more receptive to the demands for gender and social justice that activists have been making for decades. “What the financial crisis has provided is an (environment) where even mainstream actors have begun questioning the dominant economic model, (asking) whether there is a way to regulate the financial sector so it works in the service of everything else,” Lydia Alpízar Durán, executive director for AWID, told IPS. “Before, the system’s failures were only felt by the very poor. Now they’re starting to create a new poor, to hit the middle class, and people are beginning to wake up,” AWID Board President Lina Abou-Habib, the director of the Collective for Research and Training on Development-Action in Lebanon, told IPS. Durán cautioned, however, that women, especially women activists, face an elevated risk of backlash in many parts of the world. “One of the biggest challenges is increased violence and repression; those struggling for change are becoming targets of attacks,” she told IPS. One area of the conference venue was adorned with dozens of memorial photographs of women the movement has lost over the years – some dead of natural causes, many others mysteriously vanished or violently murdered. In another corner, the face of Galila Khamis Toto, a Sudanese activist from the Nuba mountain region, stared out from a poster, the text informing participants that she was supposed to be there among them but was instead being detained in inhumane conditions in her home country. During the forum, activists from Egypt, Tunisia, Syria, Morocco, Libya, and other countries in the Middle East and North Africa (MENA) spoke about their ongoing battles to enshrine women’s rights into new constitutions and increase female participation in new political systems – while often facing renewed challenges to their personal freedoms. “Polygamy has been abolished for more than 50 years in Tunisia, but now we’re talking about it again. Traditional marriages, how women dress, abortion limitations, even female circumcision, which we never had before, are all being discussed,” said Ahlem Belhadj, the president of the Tunisian Association of Democratic Women.

“These are all things happening after the revolution.” Creating solidarity with women’s movements in the MENA region was one of the reasons AWID chose Istanbul as the 2012 location for its triennial forum, Durán said on the opening day of the event. “In the post-Arab-Spring phase, we need to be clear that what happens in this region has major implications for women around the world,” she told attendees. “Cultural relativism is growing and we cannot allow respect for cultural traditions to justify the violation of women’s rights.” Woman who participated in toppling Arab regimes sometimes think their countrywide struggles should take precedence over stronger pushes for women’s rights, speakers from the region admitted, adding that there can be no democracy without equality between men and women. Neither can there be “economic rights without also looking at bodily rights, at political rights,” Durán told IPS. “Women’s realities are determined by their ability to make decisions.” Tying all these different threads together into a cohesive movement is no small task. “What we see all around us at this conference, civil society, the women’s movement – that resource has to be really fostered and advanced,” U.N. Women Deputy Executive Director Lakshmi Puri told IPS.

“We’re trying to get resources directly into the hands of women who are working to bring changes about in their own areas.” At the AWID forum, those areas ranged from demilitarisation to the rights of domestic workers, religious fundamentalism to climate change, topics covered in the more than 200 different sessions on the conference program. Participants’ diverse interests were also represented in the hallways of the Haliç Conference Centre, where indigenous crafts, black-and-white nude portraits of Chilean transsexuals, and Egyptian graffiti art were all on display. The coming together of what one speaker called “the most diverse group of women outside the U.N.” is the most important outcome of the forum, Abou-Habib told IPS. “The idea of the ‘one percent’ is such a powerful one because the rest of us let it happen. We give them that power by not resisting,” she said. “There is a strong body of critical feminist economic analysis but we need to take it out of the journals and the classrooms and onto the streets,” Radhika Balakrishnan, the executive director of the Centre for Women’s Global Leadership, said at the forum’s closing session. Following her remarks, attendees did just that, massing in Istanbul’s central Taksim Square for a protest march in solidarity with their Turkish counterparts.