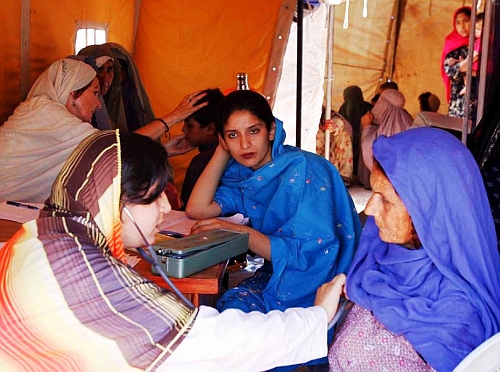 PESHAWAR, Pakistan, Apr 16 2012 (IPS) - Collateral damage caused by the ‘war on terror’, prosecuted by the United States and its allies in Afghanistan since 2001, may well extend to psychological trauma sustained by thousands of women in the bordering areas of northwestern Pakistan.

“The prolonged war has caused psychological problems to a majority of the residents of the Federally Administered Tribal Areas (FATA), especially the women,” says Prof. Syed Muhammad Sultan at the psychiatry department of the Khyber Teaching Hospital (KTH) in this northwestern city.

Lying between the provinces of Khyber Pakhtunkhwa and Balochistan and bordering Afghanistan to its west, the FATA comprises seven agencies (tribal districts) and six frontier regions and has a population of 3.3 million people, most of them from various Pashtun tribes.

Of the 15,000 people from the FATA treated by psychiatrists at the KTH last year, 9,833 were women, Sultan tells IPS. “Many of these women had lost relatives or friends either at the hands of the Pakistan army or Taliban militants.”

Last year the World Health Organisation (WHO) said there were about 451,377 people, including 345,899 women, suffering from psychological problems in the FATA.

Dr. Jamal Shah, who works with the WHO, told IPS that doctors look out for signs of psychiatric problems while examining patients from the FATA since many in the territory are prone to depression over the loss of loved ones and property.

According to Sultan, most women who seek psychiatric help at the KTH are put on anti-depressants and tranquillisers and are given counselling.

Mushtari Bibi, 45, from North Waziristan agency, was brought to KTH with acute mental trauma caused by a mortar shell landing on her house and killing her 10-year-old son. “She cries for her son at night and cannot sleep until she is given sedative medication,” Sultan said.

Rekhana Bibi, 49, a resident of Khyber agency, told IPS that her son Abdul Salam, a 9th standard student, went out of the house one evening in January and was never seen alive again. “The next day we found his bullet-riddled body dumped by unknown people near our home.”

Now under treatment at KTH, Rekhana told IPS that her husband died two years ago when he was caught in a firefight between the army and Taliban militants.

Prime Minister Yousaf Raza Gillani said at a press briefing recently in Islamabad that, since 2005, some 35,000 persons, including 5,000 soldiers, have died as a result of the logistical and military support given by Pakistan to the war. However, after U.S. airstrikes killed 24 Pakistani soldiers on Nov. 26, 2011, Islamabad closed the border with Afghanistan and demanded an apology – which Washington has pointedly refused to give.

Pakistan’s parliamentary committee on national security reiterated on Apr. 12 the demand for an apology, making it a condition for reopening the border. The committee has also called for a halt to U.S. drone strikes in the FATA where Taliban leaders are said to be holed up.

According to the London-based Bureau of Investigative Journalism, since drone strikes were first launched in 2004, more than 2,500 people may have died in the unmanned aerial attacks over the FATA and nearby areas of Pakistan.

The strikes have added to the trauma of the local population in the FATA, an idyllic tourist destination until late 2001 when the Taliban began pouring over the border after their government in Kabul was ousted by coalition forces led by the U.S.

Once ensconced in the FATA, the Taliban unleashed a reign of terror on the local population, attacking music shops, girls’ schools and government installations, provoking the Pakistan army to launch punitive raids in 2007.

“Our people are caught between the army and the Taliban and that has made the lives of ordinary people miserable,” said Saleema Bibi, who lost her husband and two sons in the hostilities.

On Mar. 30, the United Nations refugee agency (UNHCR) said in a press note that since January more than 100,000 people have been displaced, mainly from the Khyber agency, as a result of a “recent increase in the intensity of fighting.”

According to the UNHCR, the Jalozai refugee camp outside Peshawar now houses 62, 818 people. “Most of the people moving out of Khyber agency are opting to live with friends and relatives,” the press note said.

Unsettled conditions have meant that women in the FATA are unable to participate in social functions like marriages or religious festivals, which foster cohesion in their tribal communities, according to psychiatrists.

Doctors at the Sarhad Hospital for Psychiatric Diseases (SHPD), a government facility in Peshawar, confirm that many women from the FATA are suffering from depression and anxiety due to the deteriorating law and order situation there.

“Last year, we received a total of 49,000 patients which included 9,432 women from the FATA,” Naureen Wakeel, a psychiatrist at SHPD, said. “The problems that many of these female patients face require strong family and social support along with medical aid,” she said.

Lubna Hassan, president of the Society of Obstetricians and Gynaecologists of Pakistan, estimates that 50 percent of pregnant women in the FATA suffer from stress, depression and trauma.

“Last month, we saw 3,455 pregnant women from different areas of the FATA at the SHPD and found that nearly all require psychological support.

“Pregnant women should not be mentally stressed if they are to deliver normal babies,” Hassan said. “These women, who are used to staying in proper homes, are now sheltered in tents or makeshift accommodation in school buildings because of the ongoing military operations.”