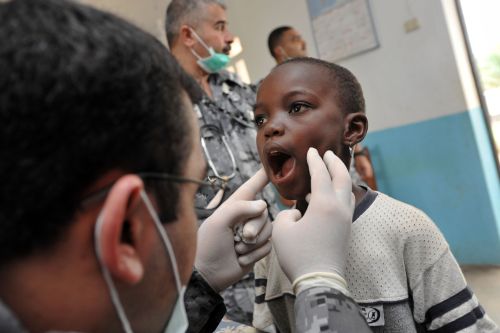 WASHINGTON, Apr 25 2012 (IPS) - Within a decade, “most” of the global population could have access to affordable basic health care – if a series of “ambitious” programmes are put into action around the world. This is according to a new report released by the Council on Foreign Relations (CFR) here on Tuesday.

By 2008, nearly 50 countries had succeeded in implementing near- universal health coverage, according to International Labour Organization statistics cited in the report. At the moment, almost 100 countries are reportedly looking into how to put in place government- funded health-care programmes.

One notable exception to this trend, of course, is the United States, where the political wrangling over universal health coverage has ratcheted up significantly since President Barack Obama passed a series of reforms to the country’s health-care system in 2009, extending coverage to tens of millions of additional citizens. The U.S. Supreme Court is currently weighing the reforms in a highly anticipated case.

According to one of the CFR researchers, Yanzhong Huang, the “new wave” of potential universal coverage includes China, India, Indonesia and South Africa, accounting for some 40 percent of the world’s population. Both China and India have made pledges to provide some form of universal coverage within the next decade.

These middle-income countries have been experiencing strong growth in recent years and have built up some of the largest middle classes in the world. This economic confidence, coupled with the newfound push from below, has led several governments to embark on strengthening their health systems.

Yet Huang notes that success in introducing national health-insurance programmes has not necessarily been defined by a country’s gross domestic product. These include not only higher-performing economies such as Brazil, Thailand and Taiwan, but also lower-income countries such as Bangladesh, the Philippines and Sri Lanka.

The CFR report coincides with a resounding new focus on universal health coverage among the international community. In 2010, the biannual World Health Report put out by the World Health Organization (WHO) focused on financing for health systems.

In early April this year, 21 countries (including the U.S.) signed onto the Mexico City Political Declaration on Universal Health Coverage, which calls on governments to “Work to promote the inclusion of universal health coverage as an important element in the international development agenda…”

This followed on a declaration in Bangkok released by representatives of 60 countries in January, which committed “to advocate the importance of integrating it into forthcoming United Nations and other high-level meetings related to health or social development.”

The New York-based Rockefeller Foundation, which sponsored the CFR report, has also become well known for its focus on championing universal health coverage as an international cause.

Much of this new focus began since 2008, as the international economic downturn constricted donor purses. A lead writer on the CFR report, Laurie Garrett, notes that a “tremendous escalation” in global health funding took place between 1990 and 2008.

This trend was motivated particularly by concerns over the spread of HIV and other specific individual infectious diseases, particularly in poor and developing countries. At the same time, however, this aid prioritisation typically eclipsed much effort given to the strengthening of health systems generally.

Since 2008, Garrett suggests, “Donor states have sought ways to spend less money while managing to save the same number of, or more, lives.”

In general, global health is very subject to fads, says Victoria Fan, a research fellow with the Center for Global Development here in Washington. “This year, it’s universal health coverage,” Fan notes, “but generally the field is filled with donors that give money for very specific issues, typically very specific diseases.”

That means that, beyond the World Health Organization, which does not engage in funding, donors are unused to thinking about issues as broad-based as country-wide health systems.

“Healthcare systems operate perfectly fine without external assistance,” she says. “It would be absurd if another developed country would give the U.S. money, for instance.”

While there is widespread consensus on the basic thrust of expanding health coverage, the details of implementation behind the new push for universal coverage are endlessly tricky.

“Universal health coverage in developing countries usually implies new resources for health – more sources or more money from the same sources,” says James Bump, an assistant professor with the Department of International Health at Georgetown University. “The demand for health-care services is unlimited in any setting, but the financials are fixed. So, fundamentally, this is a rationing issue – an ethical one.”

Historically, Bump says, health systems typically grew organically, rising around those who could pay for them before eventually being expanded to those who cannot pay. In the current international push for universal coverage, however, funders are increasingly looking for ways in which external actors can become involved in assisting this process, either through technical or financial assistance.

“The main hazard would be that because it’s a rationing question, it has to be answered with the input of the people in the system,’ Bump cautions. “If you’re asking what health-care choices are best for a certain population, that population has to be the one to offer the solutions.”

For many years, Bump says, aid agencies have been accused of foisting rigid formulas onto developing countries. “That’s not something you’d want here,” he says. “It’s not the place of external actors to answer questions related to universal health coverage – it’s not for the rich world to dictate.”