GOROKA, Apr 20 2012 (IPS) - While the number of women dying in childbirth globally declined by 34 percent between 1990 and 2008, that number doubled in Papua New Guinea over the same time period. 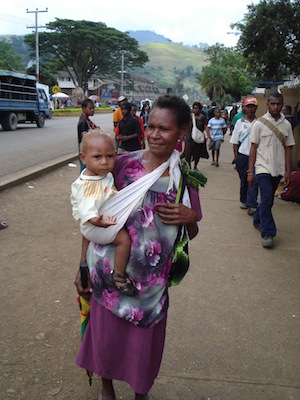 The number of women dying in childbirth in rural Papua New Guinea doubled between 1997 and 2008. Credit: Catherine Wilson/IPS

Shocking maternal mortality rates have prompted national plans to accelerate healthcare reform and women’s access to medical services, but their implementation in the Pacific Island nation remains the greatest challenge.

According to the United Nations Development Programme (UNDP), the nation’s maternal mortality ratio is 250 deaths per 100,000 live births. But the National Demographic Health Survey in 2006 revealed the more startling rate of 733 deaths per 100,000 births, the second highest after Afghanistan in the Asia Pacific region.

World health experts claim that lives of expectant mothers can be saved by medical supervision of births combined with antenatal and postnatal care. Yet this is a profound challenge in PNG, where the World Bank estimates 17 percent of people do not have access to a road and two fifths of health facilities lack electricity and basic medical equipment.

The Ministerial Taskforce on Maternal Health noted back in 2009, “The decentralisation of government roles, responsibilities and financing (in the 1980s) has seriously compromised the quality and functionality of health services, including maternal health.”

The Australian Burnet Institute of Medical Research proposes that almost one third of maternal deaths in PNG could be prevented by wider implementation and sustained central support for family and community healthcare, administered by trained Village Health Volunteers (VHVs).

Glen Mola, chair of obstetrics and gynaecology at the University of Papua New Guinea, stressed, “Women can deliver (by) themselves safely at home with their mothers and sisters in support, as long as nothing goes wrong, but if something does go wrong, then it can be mortal for that woman if she is in her house in the village. The (reason) why PNG has such a horribly high (maternal mortality rate) is that 67 percent of women deliver at home.”

“Having a professional midwife or obstetrician present in the house is not going to make any difference to her chances of surviving a labour and delivery complication unless there is backup emergency obstetric care, drugs and facility support,” he continued.

Government expenditure on health is only 2.6 percent of the country’s gross domestic product (GDP), yet it decreased by 9.4 percent between 1997 and 2004. The Department of Health has also been under investigation for misappropriation of government funds. The Ministerial Taskforce found that “women do not trust the health system to look after them.”

In contrast, health services run by church organisations, which account for 60 percent of health facilities in Papua New Guinea, have been praised.

The Church of the Nazarene operates a district hospital in Mount Hagen in the Western Highlands Province, and rural health services in the province of Jiwaka. Medical workers visit 16 rural health clinics every month offering prenatal examinations, child health clinics, family planning and health education while referring complicated pregnancies to the hospital.

Abuse and rape fuel the crisis

According to Nazarene Hospital Administrator Scott Dooley, pregnancy complications in rural communities account for most fatalities, but sexual violence is also a contributing factor.

“Many women experience forced sexual relationships, even within marriage,” Dooley said, “Pregnant women are also particularly high-risk for physical domestic abuse. We have seen this result in the loss of pregnancy many times.”

“Rape and unplanned pregnancies also lead many women to seek illegal abortions, which are very dangerous,” he continued, “We see many women who are very ill from incorrect procedures done by nurses or others trying to provide abortions for money.”

A review of maternal mortalities at the Goroka General Hospital, Eastern Highlands Province, in 2008 found that unsafe abortions accounted for 48 percent of maternal deaths.

“Forty percent of pregnancies are unplanned and the maternal mortality rate for unplanned pregnancies is higher,” Mola said, “Family planning should be available in all health facilities every day.”

“Reproductive health and understanding population issues should be part of the compulsory school curriculum at primary and secondary levels,” he continued, “So the next generation understand how we can do better.”

Dooley highlighted the urgent need for developing rural communication and roads, and addressing social and cultural fears about institutional care during childbirth.

“Many women prefer to deliver at home, even if they live near a health facility,” he recounted, “We have heard many reasons why women did not come to the hospital for delivery. These include shame of another seeing them naked, fear that a male nurse or doctor will be present, concern about the financial cost of coming to the hospital and concern about enemy tribes on the way to or in the area of the hospital.”

“It is rare to see a husband present at delivery,” he claimed. “Cultural ideas of gender roles are a big part of this. If husbands would help pay for delivery and encourage their wives to deliver in a health facility, we would see dramatic changes in the number of supervised deliveries.”

Dame Carol Kidu, the nation’s only female parliamentarian, believes the government must incorporate lessons from successful non-governmental sector health services and display greater political commitment to women’s health and development. The NGO Susu Mamas, which provides specialised care for mothers and infants, is presently working to support state health services in this area.

“We are doing our very best to train competent midwives to provide quality midwifery and maternal care, but it will be decades before we have sufficient numbers,” Mola said.

There is a likelihood that future maternal healthcare could be boosted by the recently announced Rural Primary Health Services Delivery Project, partly funded by the Asian Development Bank (ADB) and international donors, which aims to rebuild health facilities and health staff capacity across the country in coming years.