Ruth Kagia is a Senior Adviser in the Office of the President of Kenya. Follow her on twitter:@ruthkagia. Siddharth Chatterjee is the United Nations Population Fund (UNFPA) Representative to Kenya. Follow him on twitter: @sidchat1 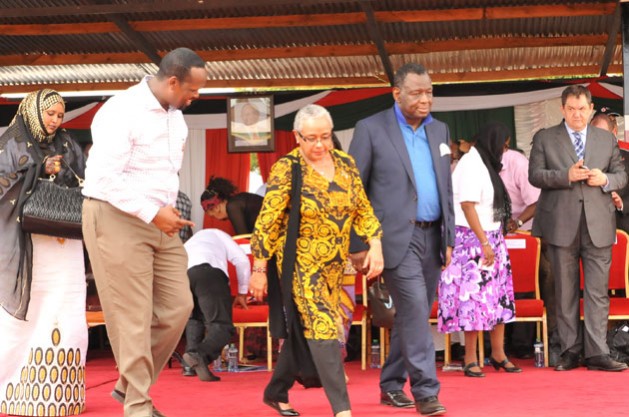 But Mandera also demonstrates what can be achieved with strong political leadership and strategic partnerships. Just under a year ago, on December 2, 2014, we were part of a team from the United Nations, World Bank, charities and the Office of the President of Kenya that undertook the two-hour flight to Mandera to determine what could be done to address this critical development bottleneck.

Minutes before take-off, news came through that 36 Kenyans had been brutally murdered in Mandera by the Somali militant group al Shabaab.

No official briefing could have better highlighted the challenges of the task ahead. Rather than acting as a deterrent, it strengthened our resolve and we continued with our journey.

Marginalization combined with internecine conflicts, pockets of extremism, poor human development and cross border terrorism have trapped so many of Mandera’s people in poverty and misery. In addition, women and girls are subjected to cultural practices such as female genital mutilation and child marriage, which contribute to high school dropouts and complicate delivery.

The government has been focused in its resolve to change the narrative in Mandera and in other historically disadvantaged parts of Kenya. The introduction of free maternity services, for example, has increased the number of Kenyan women giving birth under skilled care from about 40 to 60 per cent since 2013.

On October 13, we launched a Community Life Centre in Mandera with the technology company Philips. The centre, equipped with solar lighting, fridges, lab and diagnostic equipment, will provide better healthcare services for about 25,000 people.

UNFPA Executive Director Dr Babatunde Osotimehin has given a very clear message that UNFPA must help the hard to reach and the most vulnerable. With this resolve, UNFPA, together with the World Bank, UNICEF and the World Health Organization, supported by the Ministry of Health, mobilized 15 million dollars to improve maternal, child and adolescent health services in the six counties in March 2015.

These efforts were given a major boost on November 6, 2015, when Kenya’s First Lady H.E. Margaret Kenyatta handed over a fully-kitted mobile clinic to Mandera. The First Lady launched the Beyond Zero campaign in 2014 to reduce maternal and child mortality in Kenya.

Dr. Osotimehin flew in from New York for the event, and was joined by the ambassadors of the European Union, Denmark, Sweden and Finland.

The First Lady said: “For too long, the prospect of childbirth in Kenya, to thousands of women, has been tantamount to a death sentence. No one should die giving life.”

Dr Osotimehin said: ‘‘When we invest in strengthening the health system from the community to the facility, when we invest in strong referral systems and complementary basic services, we save women’s lives but we also underwrite our future as humanity.”

Maternal health is a perfect illustration of the fact that the process of development is multi-dimensional. Poor maternal health affects women, their children and their communities. It affects nutrition, human development, population dynamics and it undermines the quality of the labour force.

Like the tentative steps of an infant beginning to walk, these may seem modest achievements in the face of the significant challenges in these remote counties. The counties require structural changes which can lead women out of poverty, eliminate gender inequalities and build stronger health systems.

The partners’ grit and the commitment demonstrated by the government together with leaders like the First Lady and Mandera County Governor Ali Roba give reason for optimism that these challenges can be overcome.

Improving maternal health is not only achievable, it is a goal worth reaching.