WASHINGTON/UNITED NATIONS, May 3 2012 (IPS) - Fifteen million babies, or more than one in 10 infants, are born prematurely each year. Over one million die soon after birth, or survive to face a lifetime of health complications, says a new report by the World Health Organisation and co- sponsors. 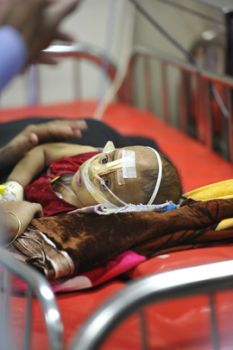 Preterm births are rising in almost all countries and are now the single most important cause of neonatal deaths. Credit: UN Photo/Mark Garten

Preterm births, defined by 37 weeks of completed gestation or less, are rising in almost all countries and are now the single most important cause of neonatal deaths of babies under 28 days.

“Being born too soon is an unrecognized killer. Preterm births account for almost half of all newborn deaths worldwide and are now the second leading cause of death in children under five, after pneumonia,” Joy Lawn, co-editor of the report “Born Too Soon: The Global Action Report on Preterm Birth,” and director of Global Evidence and Policy for Save the Children, said in a press release.

“The numbers of preterm births are increasing. In all but three countries, preterm birth rates increased in the last 20 years. Worldwide, 50 million births still happen at home and many babies die without birth or death certificates.”

“What I found shocking is (the difference) geographically and within countries when we look at the rates of preterm birth in Asia and sub- Sahara Africa… What really struck me is the equity gap of preterm birth,” Christopher Howson, co-editor of the report and head of Global Programs for March of Dimes, told IPS.

However, the problem is not confined to the developing world. The United States and Brazil both rank among the top countries with the highest number of preterm births. In the U.S., at sixth place, more than one in nine births, about 12 percent, are preterm.

The report links a number of factors to the increase in preterm births, which in general remain unexplained though a number of risk factors have been identified such as a prior history of preterm birth, underweight, obesity, diabetes, hypertension, smoking, genetics and pregnancies spaced too closely together.

In high-income countries, causes include older women having babies, increased use of fertility drugs resulting in multi-fetal pregnancies, and medically unnecessary inductions and Cesarean deliveries before full-term.

Preterm births have been a largely overlooked and neglected problem, health experts admit. This report is the first ever to provide comparable country-level estimates for preterm births.

“Ten years ago, I was working as a pediatrician in Ghana and it was very obvious every day…I was in charge of the baby nursery with about 11,000 births a year and there were babies dying every day of things that they did not need to die of. I started looking around and at the time there were no U.N. estimates of death or clinical guidelines of what to do or donors interested in it,” Lawn told IPS.

According to the report, two-thirds of premature births could be prevented with “feasible, cost-effective care.” Prevention is the key to reduce preterm numbers, and an estimated three-quarters of babies born too soon could survive if only a few proven and inexpensive treatments were more widely available.

Essential and extra newborn care, including feeding support, neonatal resuscitation, and Kangaroo mother care, a method involving infants being carried with skin-to-skin contact, could help in reducing the number of premature deaths.

The report also recommends that healthcare providers collaborate with businesses and civil societies to advocate, invest and provide funding to reduce preterm births. Even adding a dollar for each woman in prenatal care can make a difference, Lawn told IPS. “There are a couple of things that people can do to make the Millennium Development Goal (MDG) reachable. Even if the countries just picked two methods, like Kangaroo care and prenatal steroid shots, that can be a major game changer.”

MDG 5 aims to reduce by three-quarters the maternal mortality ratio, as well as achieve universal access to reproductive health care.

There’s an action gap in what is being done, Howson said. Civil society groups, for example, are an untapped resource that can be powerful in the community.

“We all have a role to play. I think in particular that groups like parent groups are so incredibly important in really creating noise. They are able to advocate from the ground up and that can be much more effective than trying to change from the top down,” he said.