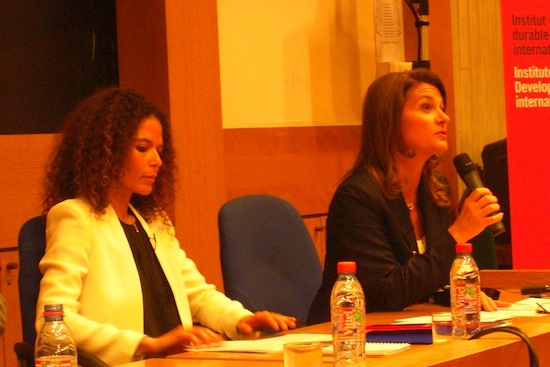 Melinda Gates (right), co-chair of the Bill and Melinda Gates Foundation, pressed for gender-sensitive development aid at a conference on Apr. 4 Credit: A. D. McKenzie/IPS

PARIS, Apr 5 2012 (IPS) - Though United Nations experts agree that governments should focus on empowering girls and women as a key to managing a world of seven billion people, not enough is being done for women’s rights in developing countries, aid advocates say.

“There are 215 million women around the world who would like access to some kind of birth control tool who don’t get it today,” said Melinda Gates, co-chair of the Bill and Melinda Gates Foundation, at a conference on development aid held here on Apr. 4.

“This is particularly true in many of the countries (with which France has bilateral aid agreements), in West Africa, for instance,” said Gates, the wife of Microsoft’s founder. “If women have access to contraceptive tools, they can save their own lives, because we know it will decrease the number of women dying in childbirth and also save children.”

She added that the whole idea of aid is “not to have people on aid forever.” It’s to build countries that provide the right products and services to their people. “That’s what leads to sustainability, and that’s when a society can lift (itself) up.”

On the same day that Gates spoke in France, the Paris-based Organisation for Economic Cooperation and Development (OECD) issued a report showing that global development aid declined by nearly three percent in 2011 for the first time in more than 10 years.

The organisation said that in 2011, members of the Development Assistance Committee of the OECD provided 133.5 billion dollars of net official development assistance, representing 0.31 per cent of their combined gross national income (GNI). This was a 2.7 percent drop in real terms compared with 2010.

Meanwhile, total net official development assistance provided by all 27 member states of the European Union was 73.6 billion dollars in 2011, which represents 0.42 percent of their combined GNI, down from 0.44 percent in 2010, the OECD report said.

The drop came despite the EU’s pledge to allocate 0.7 percent of member states’ GNI to development assistance by 2015. French aid, for instance, fell from 0.51 percent of GNI in 2010 to 0.46 percent last year.

“This is a major cause for concern, ” said Guillaume Grosso, director of the French branch of ONE, the anti-poverty group co-founded by Irish musician Bono.

“France is one of the most important players in terms of how much money they put on the table. So if France is starting to move backwards, it can have a domino effect,” he told IPS.

He added, “Each reduction in the aid budget prevents children from going to school, prevents treatment for the sick, and prevents families from having access to clean drinking water.”

ONE wants France to take a leading role in championing development aid, because of the country’s status as a “driver” (with Germany) in the EU, and as a member of the Group of 8 (G8) major global economies.

French president Nicolas Sarkozy has supported a tax on financial transactions (FTT) to aid development, and the French government plans to implement the tax without waiting for its European or G8 partners to come on board.

But Sarkozy faces a two-round presidential election in April and May, and there is no guarantee that he will be around to see new policies through. He currently trails in the polls to Socialist challenger Francois Hollande.

“The situation of Africa and development has been largely overlooked in the election campaign, but it should be an essential part because what France will do or will not do in the next five years can have a tremendous influence in the world for good or for bad,” Grosso told IPS.

Marie-Do Aeschlimann, national secretary for the ruling Union for a Popular Movement (UMP) party’s international humanitarian and solidarity action, told IPS that Sarkozy “was the first to fight for innovative financing”. She said that the FTT will be implemented in August of this year in France, and will be used to fund development from 2013.

“The stronger France is financially, the more (it) can help to aid development overseas,” she said, adding that Sarkozy and his party were “very attached” to the goals of promoting gender equality and women’s rights as outlined in the Millennium Development Goals (MDGs).

“We will continue to support programmes that enable women to become more autonomous, particularly through professional training, but also in their function as mothers, which is very important,” Aeschlimann added. “We also support the right of women to choose to have or not to have children, and at their own timing.”

Many NGOs, U.N. agencies and parliamentarians continue to call on governments around the world to do more for women’s reproductive rights.

The United Nations Population Fund (UNFPA) says that reproductive health and women’s empowerment are linked to the eight MDGS. Regarding poverty reduction, for example, the UNFPA says, “Countries that support desires of their citizens for fewer children and longer time between births, while simultaneously reducing mortality, reap benefits in social and economic development”.

At last year’s G8 summit in France, parliamentarians from 35 countries also appealed to leaders of the world’s major economies to focus on the role of women and girls in development.

“We wish to draw the world’s attention to two aspects of human rights that are the most neglected – the situation facing girls and adolescent women and the challenges posed by global population dynamics at present,” said a resolution issued at the end of the Global Parliamentarians’ Summit held at France’s National Assembly last May.

The resolution said that 600 million girls and young women in the developing world “are in a vulnerable situation, facing injustices and inequities that constitute a major obstacle to social and human development, both at a personal and a societal level.”

The parliamentarians, from European Union member countries as well as from Africa, Asia and other regions, called for changing the policies that see women receiving less than two cents of every development dollar.

This week, Gates added her own support to the push for more development assistance to women.

“Women are the fabric of society and they lift their families up,” she told IPS. “We know that every extra little bit of income a woman gets, they invest it back in the heath and education of their families, so they are absolutely fundamental towards getting a society to grow and develop.”

But even if development aid to women were to increase significantly over the next years, NGOs worry that investment will be undercut by the EU’s own corporate policies. Groups such as ONE are pushing for strong legislation on the extractive industries, for instance.

“We need legislation at the EU level so that Europe can take a strong stance and force European companies to publish what they pay to countries in which they exploit resources,” Grosso told IPS.

He said this was to avoid situations such as in Equatorial Guinea, which is one of the richest countries in Africa, with a GDP equivalent to that of Portugal, but where “two people out of three live on less than a dollar a day”.

“The contracts between petroleum companies and governments are so opaque that there can be all kinds of corruption and misuse of funds,” Grosso said.

“It’s very important that development aid is not some kind of excuse for running atrocious commercial or agricultural policies that close the door to access to markets for African farmers, for instance, two- thirds of whom are women,” he told IPS.