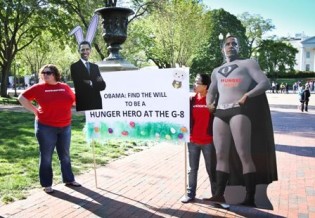 By Charundi Panagoda
Days before the annual White House Easter Egg Roll, anti- poverty advocates staged their own egg hunt in Lafayette Park to urge President Obama to "find political will to end global hunger" during the upcoming G8 Summit at Camp David.

By Sanjay Suri
For a start, stop calling it "aid", Brian Atwood, chair of the Development Assistance Committee at the OECD, tells IPS.

By IPS Correspondents
Stressing that there is only so much money to go around, development experts worry that the aid package the Group of Eight (G8) has announced for North Africa may mean fewer funds for the rest of the continent.

By A. D. McKenzie
As leaders of the Group of Eight ended their two-day summit in this seaside town Friday, non-governmental organisations said the meeting had resulted in few concrete commitments.

By Thalif Deen
When leaders of the Group of 8 (G8) industrialised nations meet in Deauville, France later this week, there is a strong possibility that politics will take precedence over traditional socioeconomic issues like food security and development aid, which are being overshadowed by the Arab revolution and Palestinian statehood.

Push for Girls’ Education Ahead of G8

By A. D. McKenzie
Amid a flurry of meetings in Europe, U.S. Secretary of State Hillary Rodham Clinton will help to launch a "global partnership for girls' and women's education" here Thursday at the United Nations Education, Scientific and Cultural Organisation (UNESCO).

By Ranjit Devraj
With the search for a new chief of the International Monetary Fund (IMF) increasingly likely to stay within the European pale, a top Indian economist says that what matters is that the Fund changes its approach to countries in distress.

By A. D. McKenzie
Ahead of this month's G8 summit in France, parliamentarians from 35 countries have issued a strong call for leaders of the world's major economies to focus on the role of women and girls in development.

G20: Heading Towards the End of Globalisation?

By Mario Osava
A "grave recession" in the world economy may lie ahead, with a profusion of new barriers to trade and capital flows, if the Group of 20 major economies (G20) fail to come up with solutions to the present crisis.

By Marwaan Macan-Markar
South Korea’s closing of ranks with Asian countries that have recently embraced capital controls signifies that such measures will be up for discussion at next week’s summit of the world’s 20 major economies in Seoul.

Scrambling for a Solution on IMF Governance Reform

By Matthew O. Berger
Among the topics expected to be discussed at the annual meetings of the World Bank and International Monetary Fund (IMF) that started this week and will continue through the weekend is the reform of the IMF’s governance.

By Thalif Deen
The G20, a group of powerful political and economic decision- makers criticised for its exclusivity, has invited five non- members to its next summit meeting in South Korea in November.

By IPS Correspondents
The Comprehensive Africa Agriculture Development Programme (CAADP) has received a major boost as several countries have begun drawing on funds from a $22 billion pledge made by the G8.

By IPS Correspondents
Nearly 600 people were arrested as global leaders and elites met behind a fortified perimetre during the G8 and G20 Summits in Huntsville and Toronto this weekend.

By Bankole Thompson
The 2010 U.S. Social Forum ended Saturday in Detroit, a city viewed by many as a metaphor for the excesses of U.S. capitalism, with strong parting words from Pablo Solon, Bolivia's permanent representative to the United Nations.

G20: China May Not Play Saviour

By Antoaneta Becker
Against a backdrop of rising expectations that it holds the key to global economic recovery, China has sent a subtle signal that its economic health is frail and that external pressure to revalue its currency will cause more damage than good.

By Stephanie Nieuwoudt
Questions are being asked about whether the Group of Eight invitation to seven African states to attend its summit in Ontario, Canada, reflects its concern about the litany of unmet promises dating from its 2005 Gleneagles meeting -- or whether it merely amounts to another bout of window-dressing.
Next Page »
ADVERTISEMENT ADVERTISEMENT